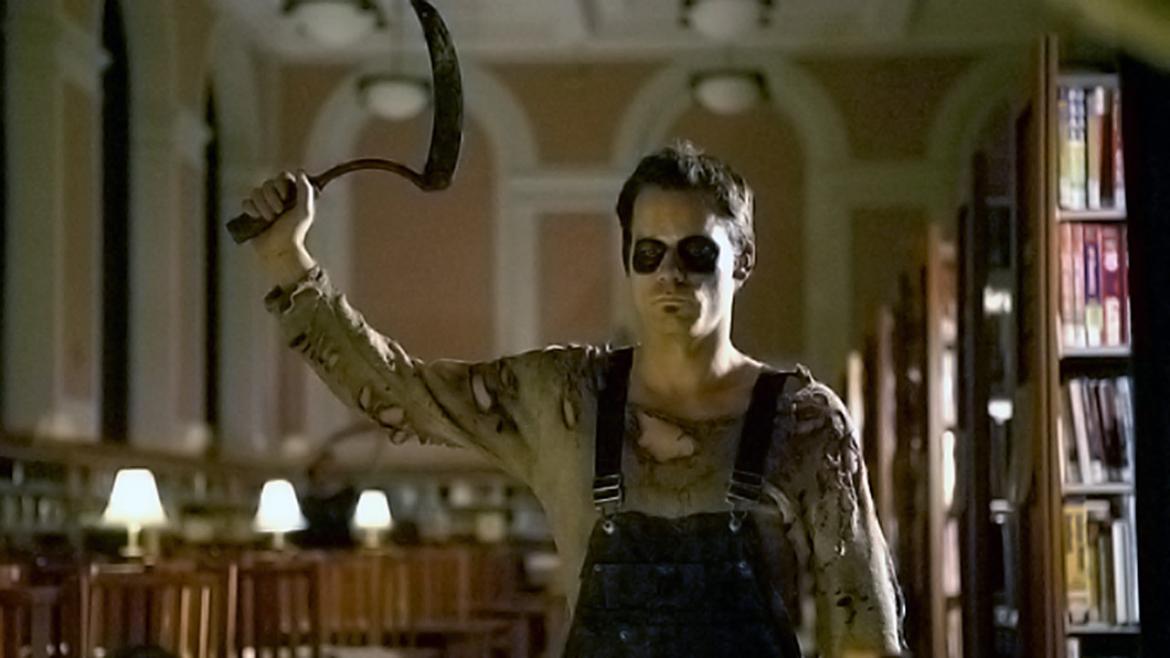 Behind the Mask: The Rise of Leslie Vernon (Movie Review)

If you thought after "Scream," "I Know What You Did Last Summer" and "Urban Legend" that the slasher film couldn't get any more self aware, than you probably haven't seen "Behind the Mask: Rise of Leslie Vernon." If that's the case, I would recommend you go pick it up right now.

The film follows Leslie, in true mockumentary style, through the intricate preparations for a slasher style murder spree. You see, in this universe, the likes of Michael, Jason and Freddy actually exist. And if you are to take Leslie's experience as the norm, the are all just really regular guys who have a passion for killing as many teens as they possibly can.

If this sounds bizarre, I have to agree. The premise looks so ridiculous on paper that I'm amazed anyone had the balls to actually fund it. If I were sitting in a room and someone pitched me this, I'd laugh in their face. It's because of this that the outcome is so surprising.... it's actually a great film, even if I have no idea how to categorize it.

Through the eyes of the camera crew we see Leslie undertake every painstaking step one would have to in order truly pull off what the killers do in these movies. First you've got to find the "final girl," and of course make sure she has the requisite group of diverse friends. She herself has to be a virgin, and as pure as possible, otherwise the whole system falls apart. We also see how much preparation one must undertake to ensure that everything "goes wrong," like pulling spark plugs, pre-breaking branches and of course, sabotaging weapons so they're of no use to the final girl later on. It's got to make you chuckle when you stop and think how ridiculous a lot of slasher movies really are. Not that we didn't know that already.

Leslie has his own "creation myth," complete with angry townsfolk and vengeful spirits, and even his own "Ahab," played lovingly by Robert Englund, doing his best Doc Loomis impression. The strange thing that I think I never truly understood before I watched this myself, is that this entire movie is mostly played for laughs... mostly. It starts out spooky, but as soon as we meet Leslie the tone becomes apparent, when smiling ear to ear he introduces us to his pet turtles. He laughs and says, "Ya, I don't feed them for days on end but, they just won't die."

Then we go to the house of his mentor, a former serial killer himself (and his wife, who according to Leslie is "F'ing hot!") and they sit around and reminisce about the "good old days" when everything was much simpler. From there we watch Leslie train (it's not easy to kick everyone's ass!) and we see him go through the motions of picking out and luring his victims.

"Behind the Mask: Rise of Leslie Vernon" is a bizarre little film that deserves a watch from anyone who digs slashers. It's smart, surprisingly emotional and uber self aware. Nathan Baesel plays Leslie, a character that runs the risk of being much too over the top, but handles the comedy pretty masterfully. He's deadpan hilarious for most of the running, and even manages to be a bit menacing by the end. Angela Goethals, an actress I recognize but not sure really from what, is something of a revelation as the TV reporter following Leslie on his killing spree. Both of these actors inject a shocking amount of emotion into a film that could have been a ridiculous mess.

Which isn't to say that it doesn't have it's faults. Buying the premise requires an enormous leap of faith on the part of the viewer. When Goethals' character witnesses her first murder and decides she can't handle it any more, one has to think just what the hell she thought she was doing this entire time. Considering how lightly she took the idea of mass murder just minutes beforehand, it's a little unbelievable (even for this film) that she suddenly had a change of heart. Also, the not-so-surprising twist towards the end, although clever, was very predictable.

The last half an hour or so eschews the comedy and high-brow philosophizing of the first half and goes into full on slasher mode. The director squeezes a surprising intensity out of this portion, considering the lengths at which he goes to portray his killer as a cartoon in the first hour, but one can't help but be ready for it to be over before the end. They so knowingly point out to us how predictable this all is, that they forget to really mix it up too much during the finale. The lack of gore throughout the entire affair also seems like a shocking omission, although one gets the impression it was due to budgetary reasons.

I also really wanted to see more of Robert Englund's character (not much is done with him) but minor quibbles aside, "The Rise of Leslie Vernon" is one of the most imaginative films I've ever seen. It really takes self awareness to the highest place I can imagine it going, and lovingly skewers the slasher flicks that we all know and love. Along the way, it manages to hammer home some very surprising emotional moments and intellectual points, even if it's not a flawless film in the end. Recommended for ALL horror fans.

Movies Like Behind the Mask: The Rise of Leslie Vernon