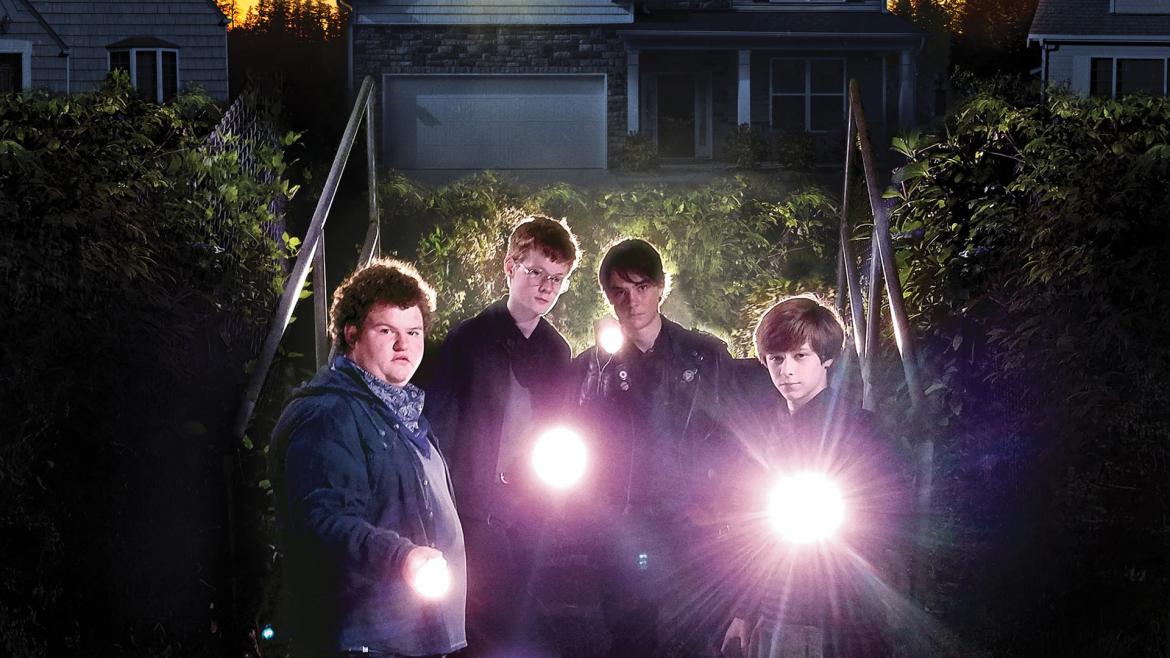 If you're a sucker for nostalgia, Summer of 84 from the folks who brought you Turbo Kid, is more interested in creating an 80's vibe than presenting a meaningful time capsule of the period. The synth score and Amblin-esque adventure tone provide suitable passage for the nostalgia train, but if you're looking for a fresh perspective on the "serial killer in suburbia" story, then Summer of 84 may not adequately scratch that itch.

The directing trio Roadkill Superstar (Anouk Whissell, Yoann-Karl Whissell, and François Simard) do nail the restlessness and intrigue of life as a kid in small town America. That's why when Davey (Graham Verchere) reacts with a curious excitement at the idea of a serial killer on the prowl in his slice of Oregon his reaction comes off much more earnest than far-fetched. Pooling together their collective character types Davey and his buds (Judah Lewis, Caleb Emery, Cory Gruter-Andrew) team up to try to back up his theory that the town's beloved cop, Mr. Mackey (Rich Sommer), is actually the Cape May Slayer.

Summer of 84 may actually be two different movies or was conceived with two different tones in mind with some of its darker elements proving too tempting to leave on the cutting room floor. The problem is that its dark heart really doesn't start to beat until the film's climax which despite its chilling effectiveness upends the mostly harmless teen adventure that came before it. In some ways that could be the film's ultimate goal, to present a carefree childhood introduced to an unknown variable that ultimately strips apart that innocence by submerging it into pure darkness. Whether or not that tonal shift sits well as the credits roll may just be what makes or breaks the film for some.

For others, it's a wildly inconsistent script which spikes its teen sense of adventure with mortal danger but overdoes it with the crude mind of a teenage boy. It's foolish to pretend that a lot of the dialogue the boys spit out isn't accurate, but a lot of the vile things they say often live in the mind unsaid or are confined to the company of close friends. There is an imbalance to just how crude the dialogue tends to be and at times it tips the scales to being somewhat desperate for a gross laugh that comes at the expense of losing respect for characters that never really earned it from the get go. This is compounded by the baffling use of the lone female teenager, Nikki (Tiera Skovbye), who is inserted as an inappropriate love interest with apparently no qualms about the horny neighborhood kids getting a glimpse of her self-proclaimed awesome bod.

Examined individually with deeper rational thought the problematic nature of the dialogue and questionable love angle is hard to overlook. However, there are still glimpses to a more innocent agenda by the filmmakers that was perhaps misguided and in need of a second, third, and forth pass to filter out a lot of the "yuck" that tends to linger after the umpteenth "I banged your mom joke". The vulgar nature of the teen mind is not lost on anyone, and yet, there's a line that Summer of 84 routinely steps on that sometimes threatens to undo some of the more thoughtful aspects holding it together.

What begins as something of a teen adventure mystery set in a sleepy small town turns especially dark in the film's last act. The brooding sense of hopelessness we're left with is decidedly at odds with the previous acts. Abandoning a traditional ending proves to be one of the more interesting and bold choices given the tone of over half the film. This could prove to be a lasting sense of imbalance to the film as a whole, or maybe even the saving grace depending on how much you do or do not relate to the characters.

Summer of 84 is not without its questionable intentions within the writing of its teen protagonist, but there's just enough there to endear you to the setting and the overall vibe that RKSS creates. When the ending comes in and smacks you in the face with an almost too real sense of dread of innocence lost it begs one to re-examine the movie and it's intentions tonally, leaving it open for plenty of discussion and solidifying it as a sneaky dark coming-of-age thriller.