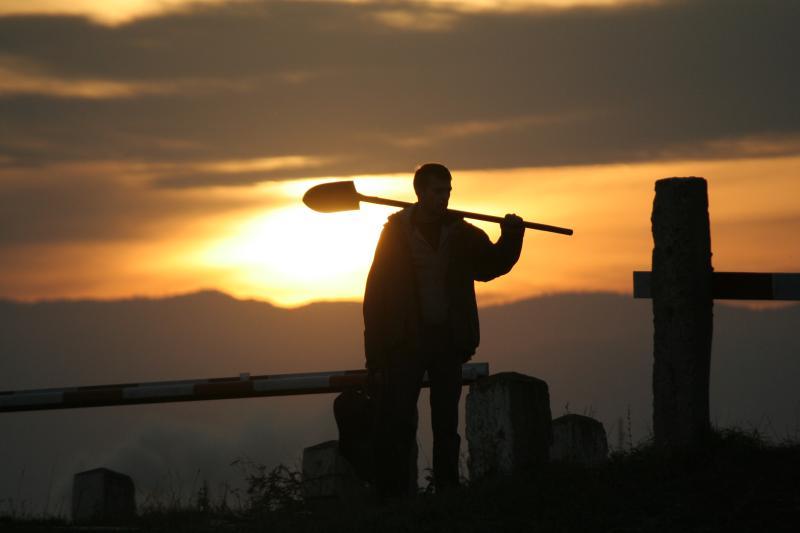 It’s refreshing to encounter a new voice in horror fiction that comprehends the draw of traditional horror mythologies but who is also perceptive enough to see how these myths can translate in various contemporary contexts. Take for example Tomas Alfredson and Matt Reeves’s adaptations of John Ajvide Lindqvist’s vampire novel “Let the Right One In.” The original novel and its subsequent adaptations discern some rather beautiful and shocking correlations between vampirism, adolescence, childhood, and the Cold War. Certainly the story has so engrained itself in popular culture that it has become a benchmark from which other vampire fictions will be judged—for better or for worse.

Faye Jackson’s “Strigoi” is another version of the vampire myth that is cut from this same cloth. While not as slick, well produced, and tender as “Let the Right One In”, “Strigoi” is a perceptive look at how a seemingly dated idea of what horror is can reach through time and be just as applicable today. Indeed, Jackson has crafted one of the more compelling renditions of what horror is capable of accomplishing in recent memory.

Set in the small Romanian village of Podoleni, the film centers on a recently returned graduate student named Vlad (Catalin Paraschiv). After completing his years of medical school in Italy, Vlad finds himself still unable to shake the queasiness brought by the sight of blood, rendering him unable to practice in the field to the potential disdain of both his parents and his siblings. He sequesters himself away with his grandfather and spends most of his time looking for a lost dog and searching for spare cigarettes. But when he encounters the body of a recently deceased town drunk named Florin, Vlad begins an investigation that reveals some suspicious circumstances concerning land ownership, the town’s residents, and Romania’s history. Soon Vlad uncovers a conspiracy that involves his family, a priest at the local church, elected officials, and the town’s wealthiest couple, Constantin and Ileana—some of whom may or may not be the undead of course.

The central driving mystery of uncovering the rightful land ownership becomes a pretty thin red herring. You get the sense that Jackson is more interested in the possibilities of transferring the fantastic elements into a contemporary context and less so with structuring a complex mystery. And indeed it is in the more horror driven and extra-narrative elements where “Strigoi” finds its voice. The film’s title comes from an old Romanian myth that not only refers to vampires but also encapsulates a whole host of other magical beings and creatures that inhabit multiple, sometimes contrary states of being. For example, think of the term “undead” as it functions to tell us a vampire is neither of the world nor are they separate from it. Jackson utilizes this inherent contradiction of “undead” as a metaphor to make a larger statement on the state of Romanian national identity. The “strigoi” (vampires, the undead, etc.) in this film are not intended to be violent, horrific creatures in and of themselves but function as stand-ins for a country that has experienced an intensely violent history and conflicting notions of national identity. As Vlad begins to uncover more about Florin’s death and the town’s land, we begin to hear from the other, older residents their deeply seeded feelings of injustice at the hands of both Communism and Capitalism, expressing their distrust of these institutions and their unwillingness to be preyed upon.

Though the film’s overall thematics are provocative “Strigoi” does have a fair share of shortcomings. Jackson’s direction, screenplay, and editing tend to meander a bit too much, resulting in a few rather lengthy sequences that don’t feel to be going much of anywhere, never seeking to ask or answer narrative questions. A number of details are introduced into the world that are left unexplained and characters appear to accept something only to deny it in the very next scene. For example, people that may or may not be “strigoi” begin to sprout puss-filled hives half way through the film. For what reason is never addressed. There are times when Jackson’s editing strategies unintentionally imply a jump in time only to draw us awkwardly back to a present sequence. Some of the “creepier” moments tend to land flat and much of the night photography is fairly dim. The sound tends to be bass heavy and muddled. Then there is the matter of Paraschiv’s acting. He certainly has got the presence and the looks to pull off a leading role but whenever he asks for papers or is interrogating suspects you get the sense he is just reading it right off the page with a glossy-eyed stare.

A majority of these criticisms are nit-picking, I know. And for the most part I found much to admire in Jackson’s work here. While many critics tend to see horror’s new cinematic voice in filmmakers such as Ti West, Eli Roth, or the "Saw" veterans I would much more prefer that films lacking in any sort of nepotism be given more credit. Rather than relying on the vampires to exist for their own sakes or the purposes of homage, Jackson utilizes the myth to deal specifically with complex questions of national identity, the past, and the horrors of consumption—both carnally and economically. It is seldom we see a female voice in the world of horror (or cinema in general for that matter) and I am excited to see if Jackson makes a return to the genre in her future career.