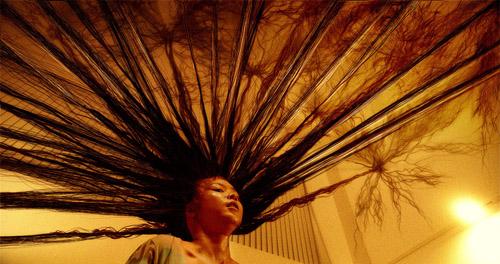 After years of diminishing returns and lackluster remakes, most people are ready to declare the J-Horror genre as dead as a little girl thrown down a well. Director Sion Sono, who made one of the best (and thankfully as yet un-remade) J-Horror films with "Suicide Circle" and its semi-sequel "Noriku's Dinner Table", has decided there's still some life in the corpse and, with his movie "EXTE: Hair Extensions", has come up with what might be the swan song of the genre.

Long hair and a vengeful ghost are major elements of the movie, but it is far from a typical ghost girl film. When the plot involves killer hair extensions you have a good indication that you aren't in for a straight-up horror film. To its credit, the film keeps a straight face and never devolves into full-on parody but it's pretty clear that Sono is fully aware of the ridiculousness of his film's premise. The most unexpected and subversive element of the film is that behind the often silly J-Horror elements in the foreground lies a surprisingly serious and heartfelt family melodrama.

Chiaki Kuriyama of "Battle Royale" and "Kill Bill" fame stars as Yuko, an ambitious young hair stylist. One day Takeshi Miike staple Ren Osugi comes into her salon with a bird cage in which hangs some of the best hair extensions the stylists have ever seen. What they don't know is that Osugi's day job is as an attendant in a morgue where he has been stealing the hair off of corpses for years. This perfect hair, however, comes from a mysterious body found in a shipping container whose hair not only somehow continues growing after death, but also grows out of her eyes, tongue and a number of open wounds on her body. Yeah, pretty gross.

In typical J-Horror fashion, eventually the hair comes to life and starts killing people. No surprises there. The real surprise comes in the story acting as a backdrop to all this supernatural action. Kuriyama's sister is a deadbeat drunk who worships a sleazy, karaoke-singing douchebag and ignores and abuses her young daughter. Kuriyama discovers this when the little girl is all but abandoned on her doorstep so her mother can disappear on a bender. For the rest of the film, as the hair monster goes on a rampage in the foreground a very serious story about child abuse and a broken little love-starved girl quietly plays out in the background. Most of the origin stories of J-Horror ghosts involve child abuse and neglect and, with this jarring contrast, Sono underlines the way that the genre celebrates the revenge of the ghost while making light of the much more serious and real issue of child abuse.

It probably goes without saying but "EXTE: Hair Extensions" is an unusual film. It has all the tropes of a J-Horror film, but almost takes a stance against the genre. It's a horror parody, but it lacks the obvious “nudge-nudge-wink-wink” that most horror parodies wallow in. It takes a heartbreaking look at child-abuse, but with its premise all but guarantees that much of the potential audience for such a movie will never see it. It can be watched as a commentary on society, but it can also be enjoyed purely on a visual level for the many bizarre and creative hair-related gross-out scenes of hair spewing out of tongues, open cuts and fax machines. It's unfortunate that the film came so late in the game, but audiences willing to give another J-Horror movie a chance might find a lot to like.