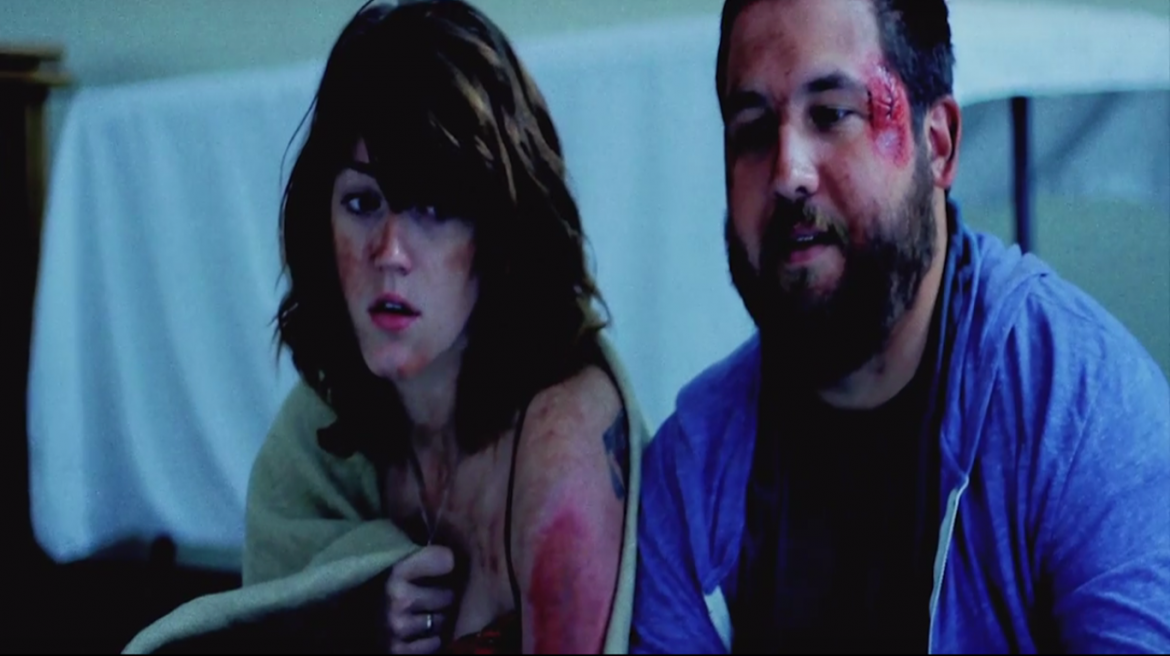 Meet Me There (Movie Review)

Bon Jovi has a song extolling the virtues of going home, one which repeatedly asks listeners “Who says you can’t go home?” The 2014 horror flick Meet Me There has a response to that question, and it’s “I do! I say it!” Over the course of ninety minutes, the film makes a convincing case about why going home isn’t always the best plan. It’s hard to argue against reasoning which includes, but is not limited to, Satanic cults; angry, easily offended rednecks and giant, overzealous preachers.

Meet Me There is the story of Ada (Lisa Friedrich) and her boyfriend Calvin (Micheal Foulk). Ada suffers from severe intimacy issues and after three years of essentially forced celibacy, the pair begins to suspect an old trauma is to blame. Ada is unable to remember much from her childhood and so they embark on a road trip in the hope that returning to her hometown will provide some answers. Almost immediately after arriving in town, Calvin has a gun pulled on him because he wore the wrong kind of hat and things only get worse. The answers they’re searching for aren’t coming and the town’s collective consciousness seems to be locked in a tug-a-war between hard religion and hard drugs.

Before long, the only three people in the town who aren’t actively trying to kill them are Ada’s meth-addicted aunt and a massive preacher (WWE’s Dustin Runnels) and his daughter. The preacher is convinced they need to kill themselves, making him a suspect ally. They seek shelter from the townspeople in the surrounding woods, encountering a Satanic cult in the process. During this night of terror, Ada is finally able to grasp what happened to her as a child.

The biggest shortcoming of Meet Me There is its script, which refuses to play it safe and aims for the stars. This is an admirable quality, but it results in the movie becoming needlessly busy at times. In fact, there are so many themes and subplots introduced that it would be impossible to provide closure on all of them – if closure was something the film cared about. Instead it often seems content to allow viewers to decide plot points and character motivation. This continues through the film’s conclusion, which again, is open to interpretation. It’s not necessary to spell out everything taking place, but it would be nice to pare things down and give viewers a little more info on one or two areas.

On the bright side, the film’s characters are extremely well drawn. Ada and Calvin are instantly relatable and likeable, a fact which is compounded by the talented leads playing them. Their easy chemistry feels like it’s been honed over a long term relationship.

Technically-speaking, the film looks great. Director Lex Lybrand excels at finding moments of quiet beauty between our characters and their surroundings. He’s able to elevate the movie above its micro, crowd-sourced budget. The only place the budget is readily apparent is in film’s audio – which is a little badly dubbed – and in the occasionally distracting, minimalist effects work.

Meet Me There is an ambitious film. While it doesn’t hit all of the lofty goals it sets for itself, it should be lauded for taking chances. A tighter focus and having additional resources at its disposal would have done wonders.

Plankton (Creatures from the Abyss)