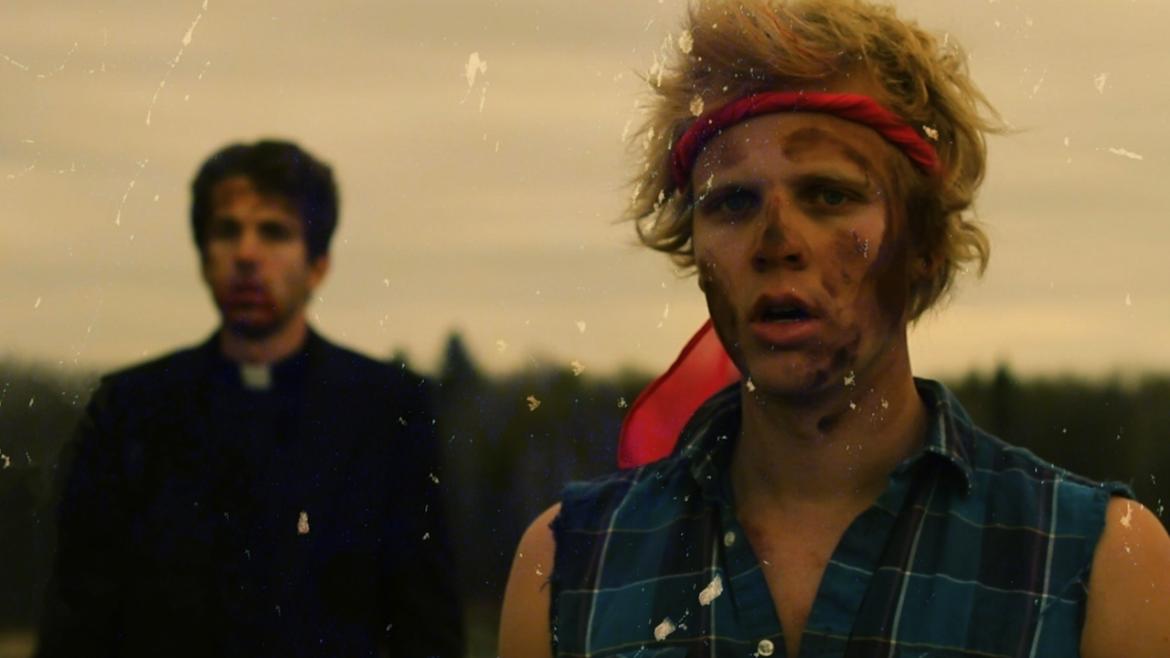 The subject of sexual violence is inescapable in horror, and like any trope it’s relied on as a crutch as often as it is brilliantly subverted. Troma’s gruesome black comedy Father’s Day is sure to divide its audience in terms of where it fits on this spectrum; it’s a shockingly disgusting, refreshingly queered up grindhouse homage that rubs the audience’s face in brutal gore while at the same time keeping us at arm’s length with wacky humor.

Several decades ago, a serial killer named Chris Fuchman, aka “The Fuchman”, raped and murdered a number of dads, including the father of Ahab (Adam Brooks). As an adult, Ahab believed he successfully trapped and killed the Fuchman, but was actually set up and imprisoned for ten years for murdering an innocent man. Now, teenaged sex worker and petty thief Andrew, aka Twink (Conor Sweeney) finds himself caught up in the Fuchman’s renewed sadism when several of his johns, and eventually his own father, fall victim to the returned killer. Together with the predictably closeted Father Sullivan (Matthew Kennedy) and his mentor, the blind Father O’Flynn (Kevin Anderson), Twink and the recently released Ahab join forces to stop the Fuchman once and for all.

Bad movies are easy to parody--almost too easy, and plenty of horror comedies have suffered from checking the right boxes without much effort. But these types of movies are Troma’s wheelhouse (they brought us the Toxic Avenger franchise, after all) and what’s impressive about Father’s Day is the attention to detail brought to the cinematography, the score, and the sets. The rich colors and campy music bring to mind the homages of Tarantino or Rodriguez, and even when the story careens into deliberate, Evil Dead-inspired absurdity, the directors never stop striving for the feel of a genuine exploitation flick.

What keeps Father’s Day from really connecting is the choice, ultimately, to make it more of a comedy (a pitch black one, but still) instead of a horror film. When comedy and horror are fused successfully, the laughs get your guard down so that the truly terrifying sequences drive straight for your heart without any obstacles. Father’s Day has some really affecting sequences (if anyone from Troma wants to quote me for the DVD packaging: "It's Dick-Chomping Good Fun!"), but by its second half it’s much more concerned with making the audience laugh than scaring them (and truth be told, some of the jokes are a little tired). It’s perversely gross, but after a point it’s not disturbing.

Regardless, Father’s Day delivers a lot of bang for your buck--or at least, for the filmmakers’. Filmed for a cool $10,000, this raunchy gorefest may not be quite as terrifying as its early scenes promise, but its best moments have more creativity by a long shot than films with 1000x its budget.