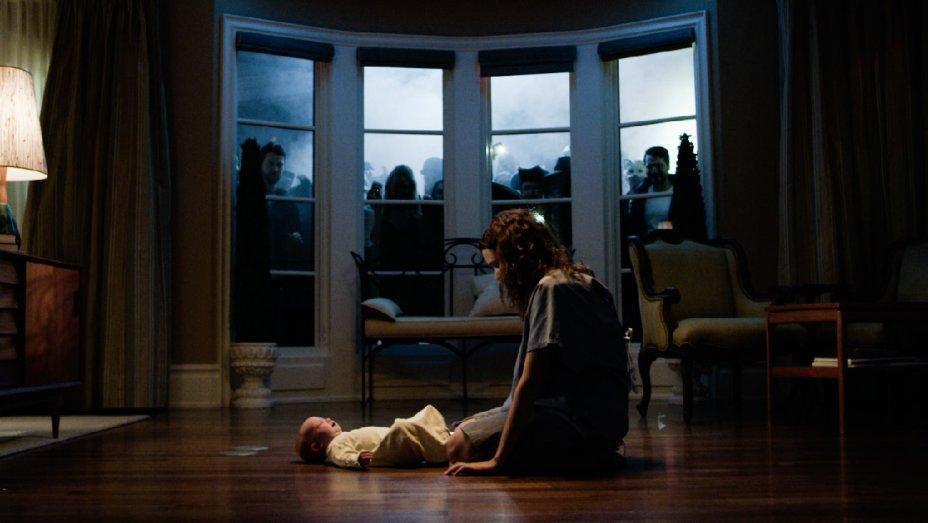 Placing children, particularly babies, in peril in any genre tends to be overtly manipulative. Sure, there's a subsection of audiences who don't have the same emotional connection to the fictional well-being of the young, and it's likely that cross-section would have no interest in Brandon Christensen's Still/Born. But those inclined to worry immensely about the safety of little ones are in for 90 stress-filled minutes.

Still/Born's ultimately tragic through-line follows new mother Mary (Christie Burke) and her hubby Jack (Jesse Moss) as they celebrate the birth of their baby boy, Adam. Their bundle comes paired with tragedy as Adam was delivered with a twin that died during childbirth. Shouldering a great deal of grief Mary can't shake the feeling that something is waiting in the shadows intent on also taking Adam from her, while the tell-tale signs of postpartum depression become an increasing concern in the eyes of Jack. Is Mary's sanity really as fragile as it appears or are her fears of a demon with a taste for the innocent flesh of babies really lurking in the dark waiting for a chance to take Adam?

Still/Born flies on the wings of Christie Burke's performance, while the cherry-on-top is a weird yet intensely sinister supernatural twist. Like many of its kind the film is a tug-of-war between whether or not our protagonist really is Adam's greatest threat (and the real antagonist) or is there actually a demon exploiting her frail mental state. Mary's research leads her to the discovery of the demon she believes may be stalking Adam. This opens the door to some supremely creepy moments as we begin to hear the haggard guttural voice of a female demon that REALLY wants to eat babies. The script makes these moments of dialogue feel really gross and they're all the more effective because of it. The tough balance being that these moments could prove to be a little groan worthy for some, but for everyone else these compliment the tension provided by the potential of Mary's postpartum depression and the fact that maybe she is the Adam's greatest threat. It's the duality of the fact that we are watching a majority of the film with Mary's perspective with moments divorced from that POV to make us doubt that her judgement is as reliable as it might seem.

It's a testament to Burke's performance that even when the supernatural aspects come off a bit heavy-handed her acting always brings it back down to earth. It's only in the film's final chilling moments that we're left with a "so what happened" punch that is surprisingly effective despite finally leaning toward one side of the tragic and horrific possibilities. For some the answer might not be what they wanted from the film, and a little too bleak for others.

What Still/Born lacks is a sense of identity beyond the stellar work put in by Burke. The relationship between Mary and Jack starts off playful and there's nearly no sense of the loss they've endured. The wheels almost seem to start rolling off the tracks without much cause. Hints are given as to the financial strain incurred with the purchase of a huge house thanks to Jack's promotion, but there's no depth to the relationship as a whole which makes some of the climactic scenes struggle to show their teeth. Additionally, leaps are taken to have the cards fall as they do in the finale which tends to be an eye-rolling screenwriting crutch that, if not for the film's MVP (Burke), could have landed disastrously. Otherwise, the film's evolution to supernatural mystery could too have been extrapolated a bit more. Mary's detective work through off-brand Google leads her to another mother who claimed that a demon took her baby-naturally no one believed her either. This little bit of an info dump is really all the detail we get of the potential demon terrorizing Mary over her various baby-monitors as it continues to voice it's desire to eat her baby. Still, there's just enough there to make the potential baddie pretty disturbing based on it's intentions, grotesque illustration within the book Mary acquires (though the physical manifestations don't quite correlate), and its unsettling voice.

On premise alone Still/Born isn't the type of film that jumps out at you as the sort of sleeper gem that it so nearly is. A few too many unbaked tropes keep this one from its full potential, but a powerful central performance and a spine-tingling supernatural mean streak make this one worth seeking out.