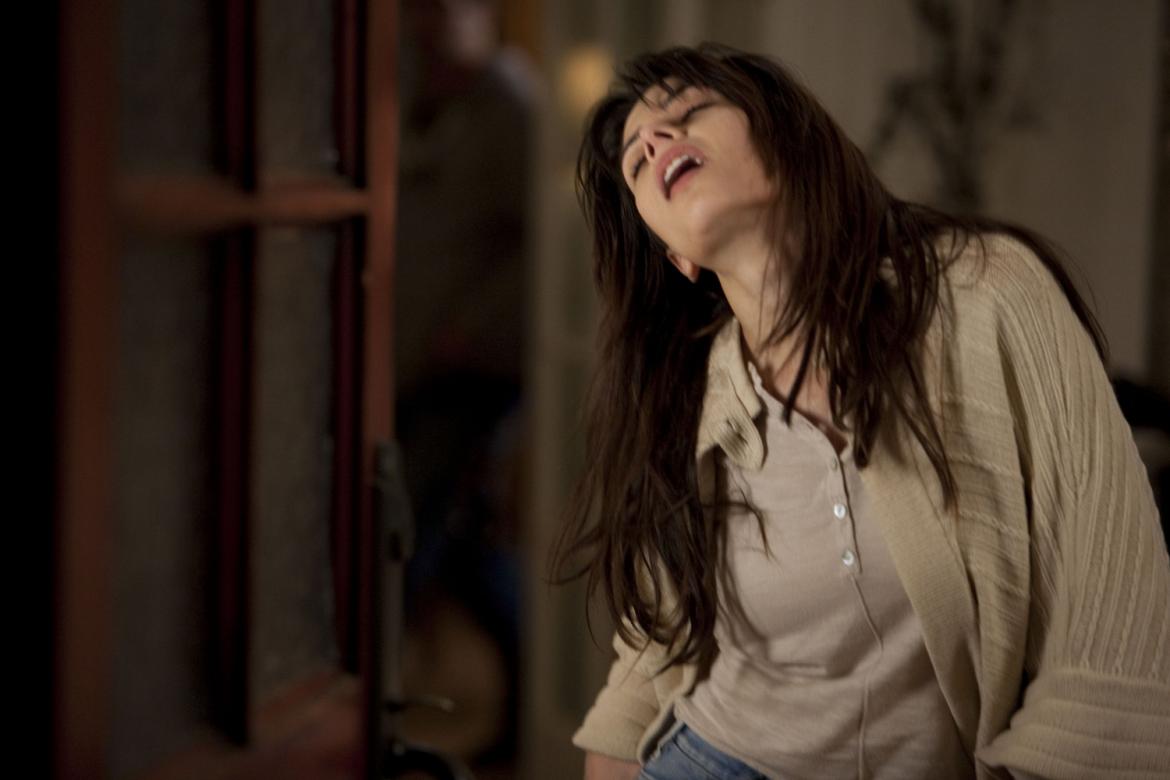 As sub genres reach the end of their ropes and the tropes become tired, new films have two choices to make to be successful. One, they can approach the concept with an indulgent tone and create an over the top massacre of the senses. Two, acknowledge the audiences exhaustion with the tropes and create a meta commentary concept. Last years “Evil Dead” remake opted for the first choice by making a balls out gore fest that gave a loving nudge to the cabin in the woods sub genre from where it was conceived. “Scream”, “Cabin in the Woods”, and “You’re Next” took more of a meta approach and created a social commentary on the audiences perception of how these slashers and home invasions had fizzled down over the years of excess. Both concept created wildly successful flicks, but they also raised an interesting question. If everything that was worth showing or saying had been done, what do the movies that follow bring to the table? Todd Levin’s film “Static” is one such film that places itself under the home invasion sub group and attempts to answer that question. Levin places all of the films worth and integrity on the twist ending.
When the entirety of a film’s level of success falls on the final frames, it can make the entire viewing process feel like a chore.

“Static” tells the story of writer Jonathan Dade (“Heroes” Milo Ventimiglia), his wife Addie (Sarah Shahi) and their coping with the recent loss of their three year old son, Thomas. As with any traumatic event, the couple is medicating their way through the pain of loss with arguments, make-ups, and any form of escape possible. One night a young woman named Rachel (Sara Paxton) appears at their door looking for safety as she feels that men in gas masks are attempting to harm her. Jonathan agrees to let Rachel stay the night despite Addie’s disapproval. It becomes clear that Rachel knows more about the Dade’s than they expected, including the recent death of their son. Several men donning gas masks do invade the house and kidnap Rachel, forcing Jonathan and Addie to find a way to survive the night.

The initial premise of the film is one that has been done countless times before. A group of people, couple, or lone character holed up in a large house trying to heal from a previous event. Its a concept that strikes a chord for viewers due to its literal close to home feel and realistic approach. Ones home is meant to be a safe haven from the evils of the outside world and to have it invaded is a common fear. The characters typically are dealing with a recent traumatic event to take the invasion a layer deeper. It’s meant to be a time of healing and solace, meaning that along with the physical invasion comes an emotional intrusion. “Static” ticks each of the points audiences are used to seeing but sets up an air of mystery around Rachel and the gas mask men. The major weakness comes with that familiarity. As a viewer we know what movie we are about to watch because we’ve seen it before. The only reason to stay through to the end is to have the reason of why answered. If there were inventive kills or moments of suspense sprinkled throughout the second act then the film would be stronger. This leaves us with a hope that the truth behind Rachel and her involvement could make the entire film feel worth the ride. There is a twist to the film, sadly it does not work well enough to redeem two previous acts of boredom. That is what's so sad about "Static". It seems to be a valiant effort to trick the audience into something unexpected, but Levin didn't take the entire ride into consideration. Even re-watch value to look for the hints of the twist are gone because he shows each scene that call it into question.

The tricky part of this film is that it truly is well shot, acted, and directed. The atmosphere painted by the photography and camera work are quite impressive for Todd Levin seeing as this is his first film. Ventimiglia, Paxton, and Shahi are all actors that know how to carry a film and do their best with the script they were given here. As a whole, every aspect of the production was “fine” and even the story was “okay”. For a home invasion film being released in 2014, “Static” chooses to be just as its title defines, stale and nothing new.