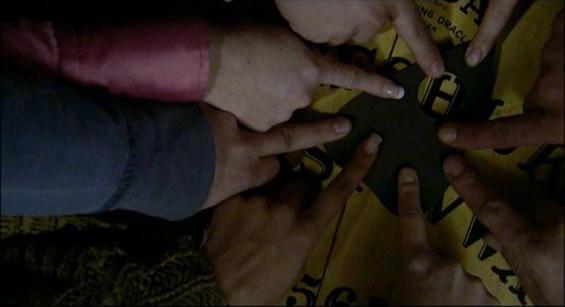 "Sl8n8" is the really, really unfortunate name of a Dutch movie that's being marketed under the equally craptastic title "Slaughter Night" in the English-speaking world. Eight being “acht” in Dutch, the title is read “Slachtnacht” which translates to “Slaughter Night”. Clever? Not really, especially for the hordes of English-speakers who can't help but read the title as “Slate Nate”. So, a straight-to-DVD worthy name in the US, a silly post-”Se7en” numeral-incorporating name back home. Not a good start at all. Surprisingly, the film is a very watchable throwback to gory heydays of 80's slasher flicks.

"Slaughter Night" has a convoluted plot involving voodoo, ouija boards, ghost dads, undead miners and "Evil Dead" style friends-turned-beasties. If you turn your brain off and tap into the right vibe it can be fun. The story follows a girl named Kristal whose father has recently died in a car accident. To get over her grief she takes a road trip with her friends to a mine in Belgium to pick up the manuscript of her father's last book. It turns out he had become interested in the case of Andries Martiens, a convicted 19th century serial killer who, in lieu of the death penalty, was sent into the mine with a torch to check for methane. If he survived, he would be set free. He didn't.

The Academy will probably pass on this one for best foreign-language film but horror fans in an old school slasher mood might just dig it. The gore, which includes such classics as the shovel decapitation and the zombie gut-munch, are a completely non-CG throwback to old school splatter flicks and are all pretty effectively pulled off.

Unfortunately it can be hard to properly admire the gore because of the shaky-cam action sequences. Shakey, hand-held camerawork has come into its own recently with many films getting it right, but unfortunately in "Slaughter Night" any time there is any action on the screen it feels like they handed the camera off to somebody's Parkinson's-riddled grandpa. If you can overlook that and the convoluted story and the parade of cliches and the often mediocre acting then you'll probably enjoy this film. Come to think of it, that's pretty much the recipe for an 80's-style slasher film.