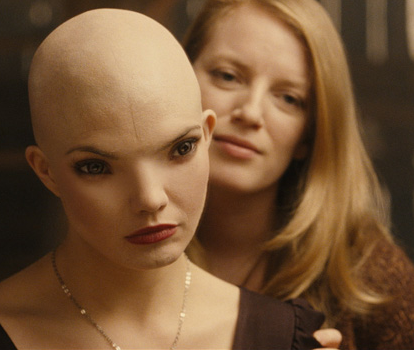 In 1818, Mary Shelley published "The Modern Prometheus," a novel we more frequently refer to as "Frankenstein." The story chronicles the creation of a monster by Dr. Victor Frankenstein, and the series of events that this discovery unleashes. Crafted as a gothic warning about the dangers of unbridled scientific exploration, Shelley's novel has spawned nearly two centuries worth of followers. From sci-fi classics like "Jurassic Park" and "The Fly" to less-celebrated gems like "Demon Seed," "Westworld" and "Frankenhooker," the threat of science run wild has been a cinematic go-to since James Whale made Boris Karloff a star as the original Frankenstein monster.

Vincenzo Natali's "Splice" arrives on screens as one of the closest descendants of the original Dr. Frankenstein. While Shelley envisioned her scientist drawing together parts of dead humans to create his monster, Natali's scientific power-couple Clive and Elsa -- Adrien Brody and Sarah Polley -- create theirs from a stew of genetic material. At its heart, "Splice" remains true to the central theme of the Frankenstein story. At first Clive and Elsa are startled by what they have wrought, but gradually they come to marvel at and even love the creature that they name "Dren" -- a cute anagram from their research facility, nicknamed N.E.R.D. They know the dangers of what they have done, but cannot bring themselves to put a stop to their "experiment."

"Splice" goes to some length to problematize this main narrative, as much of the film's early tension centers on the economic fate of the couple's research efforts. Their work has been backed (at great cost) by a pharma company hoping to hit the genetic jackpot: laboratory synthesized solutions to a wide variety of human and animal diseases. As the couple grows more attached to their hybrid "child," they begin to focus more of their energies on keeping her hidden and less on running the lab. And thus they fail to notice when two of their original genetic products begin to mutate, setting the stage for one of the more shocking corporate shareholders' meetings ever recorded.

This sequence of capitalistic failure on a grand scale is one of the high water marks of "Splice," and it finds the film at its best from a tone and filmmaking perspective. Unfortunately, Natali fails to maintain this high level of output throughout. "Splice" is, like most Frankenstein imitators, a high-concept film, which in and of itself is not a problem. But instead of building his monster up to unleash it in some "Speices"-like mayhem, Natali instead brings the film in for a close-up exploration of the familial bonds that tie Clive and Elsa to their creation as well as to one another. In some ways this makes for a film that is far more interesting than it might otherwise have been, but it also makes for a film that is far more challenging.

As "Splice" wends its way toward the end, there comes a point where the film seems to be arriving at a conclusion. While one knows that this cannot in fact be the ending, this viewer found it difficult to not wonder afterward about that false-stop and the kind of film that "Splice" might have been if left there. That 'if' would likely have meant many genre questions went unfulfilled; it would have made "Splice" an even more difficult and daring film than it ultimately becomes (which, it should be said, is still quite difficult and even daring). Where the director ultimately takes "Splice" is to the place that genre fans have known he would head the whole time. Frankenstein's monster did not get famous by dying in the laboratory.

To be clear, while "Splice" does succumb to the path set forth by its cinematic DNA, it does so with just enough panache and nastiness to rise above its predictable brethren. In fact, if there's one thing that "Splice" may help remind American horror fans, it's that theatrically released horror can still push boundaries (it doesn't hurt if said films have some international production help as this one did from Canadian and French sources). Though the film itself may not resonate with every viewer, even the most hardcore of horror adherents will probably find something to cringe at here, as its clear that Natali realizes that while viewers can be desensitized to onscreen violence and gore, we're often profoundly disturbed by encounters with that which is almost -- but not quite -- human.