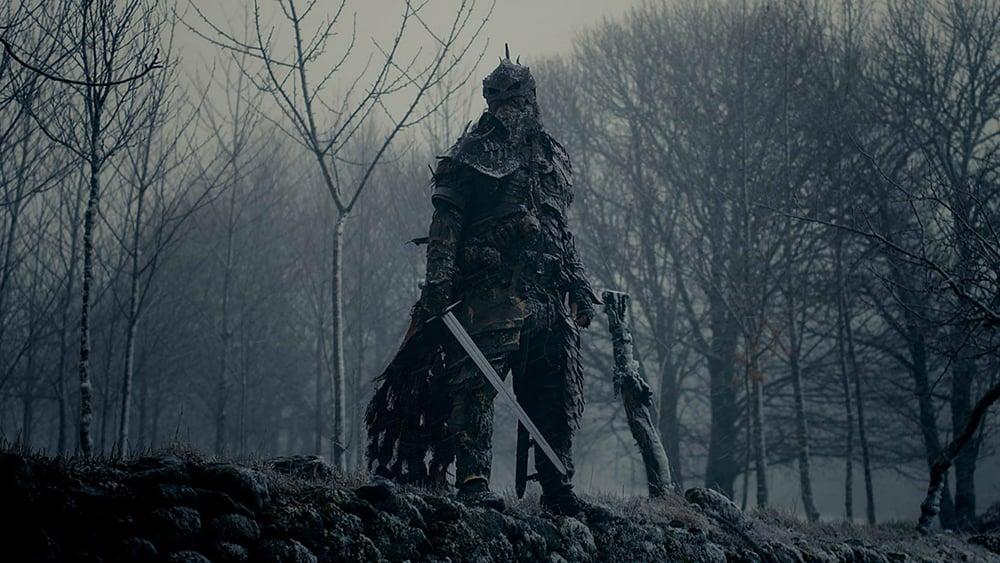 Perhaps, far down the line, we as a society will have negotiated with our better judgement and found it within ourselves to look back and pass a wry smile when remembering the moment in film history in which a poorly conceived Thanksgiving shlockest featuring a turkey puppet was released. Until then, Jordan Downey may forever be associated disapprovingly as the guy who made that gross dude-bro turkey movie, Thankskilling; an earned and shallow distinction that may require many more movies like The Head Hunter to fully eclipse. For now, this small genre offering which is surprisingly thoughtful and introspective should serve as a slight palate cleanser.

Starring Christopher Rygh, The Head Hunter is a simple story of a medieval warrior (Rygh) living on the outskirts of a village serving as the people's protector from various creatures which threaten their peaceful lives. The tormented warrior lives a secluded life, concocting a mud with remarkable healing qualities to sustain him between battles. He lives each day hoping to once again cross paths with the creature that killed his daughter years earlier and to finally add the creature's head to his growing collection. The day arrives but the hunt proves to be more perilous than he could have imagined.

Downey, working with an obviously modest budget, allows his star and Kevin Stewart’s cinematography to carry the film. The various early battles take place off screen, allowing the sound design to fill in the blanks and leaving the audience to witness the aftermath of the warrior's wounds as he applies his supernatural mud before staking the head of his conquest to a wall of trophies. The world building is where Downey manages to extract an impressive amount of imagination. This is clearly a world of supernatural creatures and witchcraft, but Downey allows the audience and set dressing to do all the work--an approach that works more than it rightfully should.

The film's three act structure shows that there is more to Downey than immature and tasteless humor. The final act in particular is the work of someone with a deep love of the horror genre, as there are some genuinely unnerving sequences which culminate in a haunting and disturbing ending. Additionally, despite a lack of on-screen action, this is a much more impressive calling card for a budding genre director, one that feels all the more impressive given the clearly minuscule budget.

The Head Hunter boasts a lived in medieval tapestry ripe with lush landscapes and world building that celebrates viewers with vivid and active imaginations. It can't be understated that the film is best fit for those with patient constitutions, but Downey manages to reward the wait with a healthy dose of practical gore and creature FX within its immensely dark climax. The Head Hunter ultimately is a surprisingly meditative and subdued monster movie where the horror evolves as it progresses and, for better or worse, does not toil around in excess.