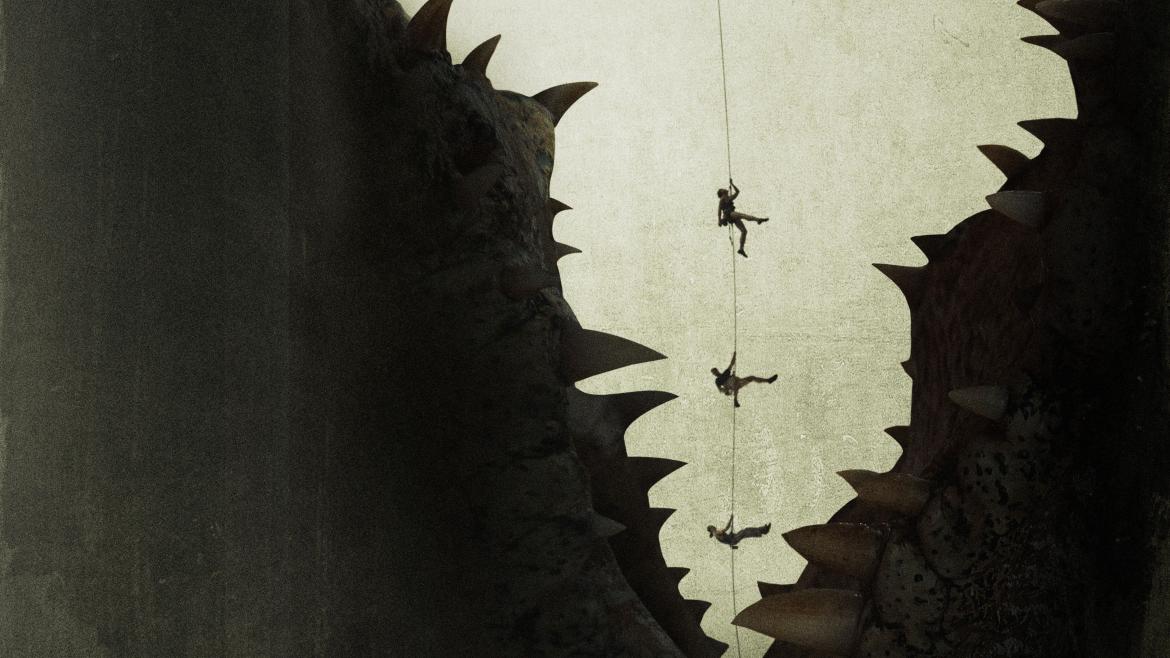 If you are a fan of creature features (namely, the ones involving big bitey sharks) you may well be aware of Australian director Andrew Traucki, who directed The Reef  back in 2010. While a lot of movies like to say that they’re based on true events, Trauki really means it. Google the news story that inspired The Reef and you’ll find a narrative that is incredibly close to the film. The movie that put Trauki on the map was the 2007 croc feature, Black Water. Again, he pulled from news headlines and stayed relatively close to true events. In the film, a young woman goes on a trip across the continent with her older sister and her sister’s partner. When the three head out on an unlicensed fishing expedition, they are attacked by a crocodile and stranded among the mangrove trees as they fight to survive.

In his 2020 follow up, Black Water: Abyss, Traucki is working with his own story this time, free of the constraints of working from truth. The film follows two couples on a weekend getaway. Eric and Jenn (Jessica McNamee and Luke Mitchell), who are poised to be our main protagonists, are struggling in their relationship. Jenn doesn’t trust her partner, and comments to her friend that she’s worried he’s still keeping his eyes out for other options. Their friends, Yolanda and Viktor (Amali Golden and Benjamin Hoetjes) have just been through significant trauma; Viktor is a cancer survivor. Yolanda reveals to Jenn in the first act that she is pregnant, but that she hasn’t told Viktor yet. It is clear that they both still grapple with the emotional toll that his illness had on them both. Our quartet are joined by Eric’s friend Cash (Anthony J. Sharpe), who tells them he’s found an unidentified cave for them to explore deep in the jungle. Yes, he discovered the mouth of the cave when he was aiding in the search for two missing tourists, but the facts are surely unrelated. Right?

After descending into the depths of the Earth and crawling through a claustrophobia-inducing tunnel, they find themselves in a massive chamber, with a pool of water at its center.  As Jenn notices something moving in the water, the cave is flooded by a wall of water. A distant rainstorm has caused the nearby river to overrun its banks, and the crew is trapped. Before long, Jenn’s worst fears are realized when the team finds that they aren’t alone. This cavern they’ve found is the home of one very large, very angry crocodile, and it’s not happy with them being there. The rest of the film plays out like you’d anticipate, with our crew trying to find a way out of the slowly flooding cave, without winding up in the croc’s jaws.

For those unfamiliar with Andrew Traucki’s movies, he has a very unique process for creating the visual effects in his creature features. While many low budget films these days lean heavily on shoddy CG to stand in for these monsters (or similarly unwieldy practical effects) Trauki and his team use footage of real crocodiles that they splice into given scenes. The effect is pretty powerful. The crocodiles have a real weight that computer graphics just can’t achieve. The stalk scenes and attack sequences are really freaking tense! There may be one or two spots where the effects look a little wonky, but on the whole, this movie will make your skin crawl!

Comparisons may be made between Black Water: Abyss and another movie involving a whole mess of folks getting stuck underground with one or two flesh-eating monsters. But links between this movie and The Descent aren’t just about the setting. Both of these movies build tension with the circumstances in which our characters find themselves, but also with the dynamics between those characters. The story that plays out between our couples and their rogue guide is not just scary because of the croc, but because of the secrets that they are all keeping from one another. At the end of the day, I guess the real monsters were the friends we made along the way.