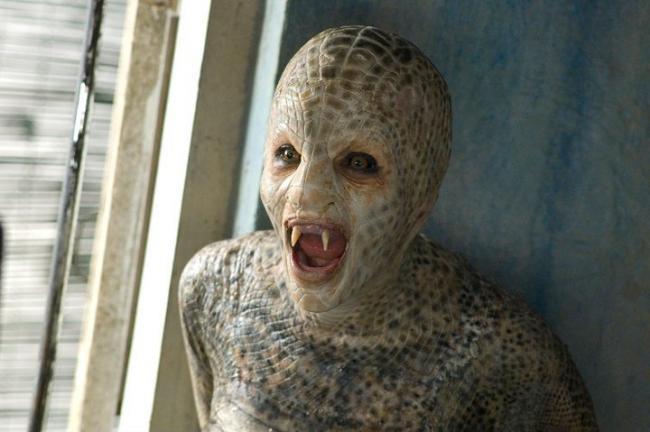 There is no area of the cinematic universe I am more under-versed on than Bollywood films. I believe I have seen a couple, I could not provide you titles, plotlines or performers and I would not, in all likelihood, recognize any of them if you were to show them to me a second time. This is not to say that I have no impressions of these film going experiences. What I remember is that much as they are reputed to do, the Hindi mega-tainment offerings I watched provided the audience with a staccato mixture of romance, action, melodrama, dance and mustache twirling bad guys. Again, I will not lay claim to actually seeing any mustache twirling it’s just the “Perils of Pauline” feeling that washed over me as I watched. Which brings me to the characteristic of Bollywood films that I find endlessly perplexing, did I watch films from the 60’s or the 90’s? I have no idea because I am hopelessly out of my depth when it comes to the trends and the history of this brand of cinema.

“Hisss” is the latest film by David Lynch’s daughter Jennifer Chambers Lynch. The story follows a crazed and unscrupulous American named George States who has traveled to India looking for a cure for his terminal brain cancer. In his desperate search for a remedy George has tripped across the world to capture the Nag. The Nag is the snake lover of the Nagin, a shape-shifting Cobra goddess who houses an immortality talisman known as the Nagmani within her body. George figures that he can perform a little coitus interruptus, capture the male cobra and then later swap the Nag for the Nagin’s token of eternal life. As outlandish as his plan appears to be, he manages to pull it off and only kills a few hopelessly poor local guides in the process. What States hasn’t figured on is that the Nagin would retain her violent reptilian instincts even in her sultry human form. Once she transforms to search for her abducted lover the Nagin runs into all manner of nasty men and unsurprisingly (to the viewer) leaves a pile of bodies strafed with giant fang marks in her wake. This draws the attention of a local police inspector who sets his sights on catching the killer.

This is the most cohesive synopsis I can give for “Hiss”. It also reflects the cleanest narrative portions of the film, which is not to say that it encapsulates what this film is about. I’m not sure I am even qualified to do that. Jennifer Chambers Lynch seems to have set out to make a horror film infused with the rich cream of Mumbai’s flashy cinematic traditions. Unfortunately, what she has created is a laughably unpalatable masala that seems like it might turn off both Bollywood fans and Horror junkies alike.

Without speaking too much for others I can tell you that my biggest problem is this film's stomach churning mixture of pseudo David Lynchian weirdness, Bollywood spectacle, and ‘Lost” styled scene transitions that are fused to a grouping of thematic and cultural observations twhich manifest as a disjointed litany of immaterial character information that doesn’t even accidentally make the characters more relatable. In short, this film flows like over cooked lentils in cold metal bowl.

Having listed my objections, I can make room for the idea that “Hisss” is built on a film language that I simply don’t speak. For most westerners any film that tries to achieve a tone-bending meld of comedy, gravity, camp, horror and socio-religious and class commentary has to be sold to us on our terms. “Hisss” makes no such attempt, perhaps because Lynch wasn’t interested or perhaps through simple miscalculation. What is clear is that this is not a thoughtless film. There are very definite allusions to the dangers of losing tribal wisdom as well as the perils of western influence on long-held traditions. There are also references that will have limited meaning to people who are not somewhat versed in Indian folklore and the country’s social structure, people like me.

The bottom line here is this, if you are looking for a horror film, “Hisss” fails. If you are looking for a character driven drama, “Hisss” fails. If you are looking for anything other than a snake humping soap opera with a limp-dick feminist vengeance thread and a madman villain torn from a Mel Brooks script, “Hisss” fails. It isn’t devoid of entertainment value or a desire to say something with its story, but “Hisss” even in a more fluid form would be a hard amalgam to sell to most western audiences. With Jennifer Lynch returning from the welcome uptick in her story telling abilities that produced the serviceable thriller “Surveillance” to the form that made “Boxing Helena” an unintended laugh riot “Hisss” has no chance at being a film that can pull off the massive shifts contained within it’s story.