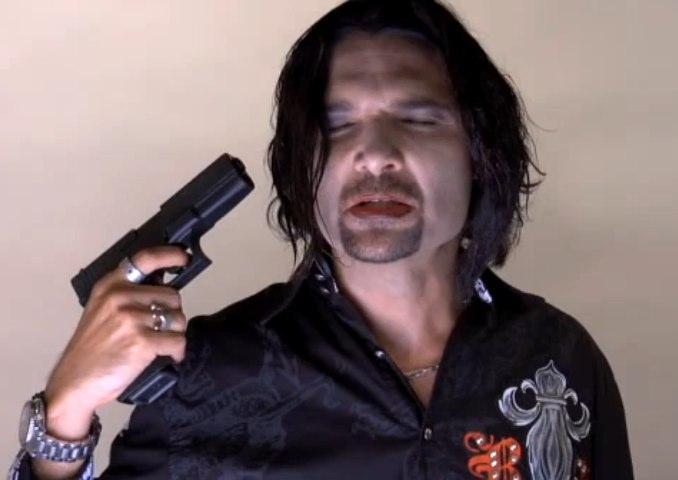 In 1961 William Castle, the P.T. Barnum of mid-20th century horror movies, released a film called “Mr Sardonicus”. As with most of his films, “Mr Sardonicus” came with a built in gimmick: at the movie’s climax, audiences were given the choice to show mercy and redeem the villain or to further punish him and condemn him to death. The story goes that,

every time the film was screened the audience voted to punish the bad guy and the happy ending was never shown. The true beauty of the gimmick was that many people involved in the production have stated that Castle was so sure of the audience’s desire to see Mr. Sardonicus get his just dues that the happy ending was never even filmed. Fifty years later, one of Castle’s contemporaries undertook a similar experiment.

Last Halloween, legendary B movie producer Roger Corman was approached by Netflix to make a series of weekly horror webisodes in which the audience could vote on who lives and dies. Corman wrangled up his protégée (and horror movie legend in his own right) Joe Dante and writer Richard Christian Matheson (son of legendary horror writer Richard Matheson). You might expect all these legends gathered together to work on an experimental project to produce something remarkable and new. Well… not so much. The key word here was gimmick. They made a goofy slasher short starring Corey Feldman.

Feldman plays Jonny Splatter, a rock star who graphically blows his head off in the opening moments of the film. The film itself involves a group of his friends, colleagues and business partners who are gathered at a spooooky castle for the reading of his will. I could probably end the synopsis here because anyone who has ever watched a movie, cartoon or television show made after 1930 will know exactly what is about to unfold. All of them have wronged Jonny in some way and he is out to get revenge from beyond the grave with the help of a book of voodoo spells he apparently picked up from the Barnes and Nobles bargain bin. The rest of the film follows Jonny as he offs the victims one by one in an order dictated by a bunch of bored people on the internet a few months ago.

Watching “Splatter” today now that the voting gimmick is irrelevant doesn’t make as much difference as you might think. In fact, I didn’t even realize there was an audience participation element until after I watched it. As it stands now, it’s just a weird little one-off short, watchable but ultimately nothing special. I don’t know how the voting worked, but I do have my suspicions that Corman and Dante pulled a William Castle here with the ending. It has an amusing little twist that seems a little too perfect and neatly tied up to be something that was left up to the fans to decide. Then again, the character who makes it to the end is the one I would have voted for (if I weren’t both exceedingly lazy and a staunchly anti-democratic monarchist) and is the obvious one horror fans are going to choose to keep around until the end. I’m sure many of the more indignant fanboys would be outraged if they found out that the votes were a sham but I would actually appreciate “Splatter” more if there were some shenanigans going on behind the scenes.

Films (or shorts or webisodes or whatever) don’t get much more silly and inessential than “Splatter”. Essentially it’s a bunch of talent people (and Corey Feldman) slumming it to slap together a 29 minute quicky horror comedy. Make no mistake, if this were a feature length film, it would be a turd of unflushable proportions. With that extra hour of running time pared away, though, it’s not a bad way to get a quick fix of that cheap, crappy horror movie badness that all genre fans get a taste for every now and then without wasting too much of your precious time. In fact, if a new technology came out that could compress all bad feature length films into bite-size 30 minute chunks that kept only the good (or bad depending on how you look at it) stuff and cut away all the excess, I would camp outside Best Buy on its release day. Then I would finally find out what Casper Van Dien has been up to for the past 10 years.