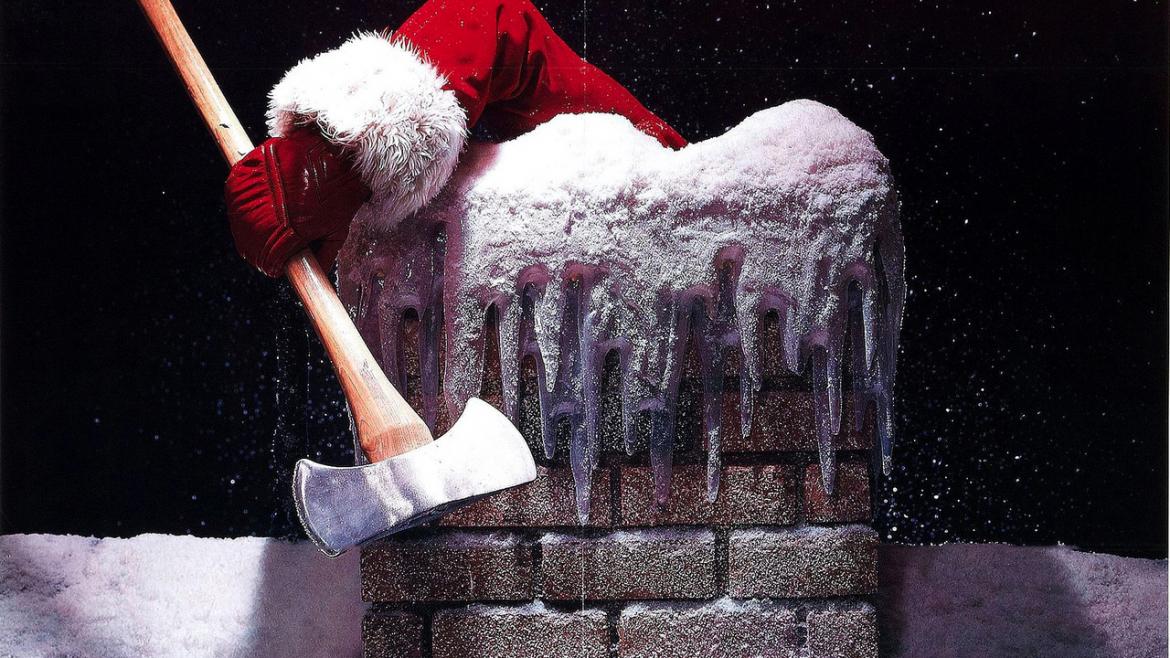 Nothing violently screams "Merry Christmas" quite like a good, old-fashioned senseless bloodletting. Nevermind the twinkling lights, the blankets of snow, and the Yuletide spirit -- if a half-naked teenage girl isn't getting graphically impaled upon the antlers of an enormous mounted deer head, then there's a very strong possibility that my holiday cheer will be less than spectacular. Your family traditions may vary slightly from my own, but I think the sentiment remains the same. I completely understand if you decide not invited me to your Christmas party this year, but let it be known that I've a penchant for holding grudges.

Director Charles E. Sellier, Jr.'s seminal 80's shocker "Silent Night, Deadly Night" -- which arrives completely uncut in the UK for the very first time courtesy of Arrow Video -- should, in theory, provide your twisted Christmas sensibilities with enough sex, gore, and goofiness to keep you warm and cozy during those chilly December nights. Even by today's hyper-violent standards, the film is fairly shocking, particularly the Santa-centric mayhem encountered towards the beginning of the picture. The imagery is jarring, unnerving, especially when compared to the macabre news stories our fragile society is assaulted with on a daily basis. I was almost taken aback.

It's extremely easy to understand why so many people -- conservatives, Christians, celebrities, and film critics alike -- were up in arms over the movie's release back in the day. After all, watching grown men dressed as Santa Claus murder, maim, and terrorize men, women, and children isn't exactly the sort of heart-warming material generally associated with the holiday season. So revolted and horrified were UK censors that the film never received a certificate by the British Board of Classification until this year. Although the imagery might seem rather hokey in this day and age, it certainly twisted the nipples of those who weren't used to seeing iconic characters mistreated and misrepresented on the big screen

The subject matter, to be perfectly honest, is a little incendiary. Portraying Santa Claus as a thoughtless, mass-murdering lunatic is sure to ruffle some feathers, especially when the material is handled in such a serious manner. The whole demented shebang kicks off with the gruesome roadside attack of a family on Christmas Eve, a crime perpetrated by a petty thief dressed in a low-rent Santa outfit costume. The father is killed instantly, leaving the mother to suffer a brutal, agonizing death at the hands of this crazy-eyed madman. And while young Billy and his brother manage to escape with their lives intact, the unrelenting psychological torment is far from over.

As an adult, Billy is more than a little deranged. Having spent most of his childhood at an emotionally oppressive orphanage governed by a tyrannical Mother Superior, the poor bastard is literally a ticking time bomb of emotional malfunction just waiting to explode. With the assistance of a kind-hearted nun, Billy finds employment at a local toy store, where he spends his days stocking shelves and assisting customers with their purchases. All is going well, that is, until he's abruptly forced to pose as the in-store Santa Claus, a feat Billy is very reluctant to attempt. Naturally, it doesn't take very long for all hell to break loose.

After the initial massacre at the toy store, the movie stumbles blindly into absurdity. Billy, in a fit of misplaced rage, begins a blood-soaked rampage through the town, an adventure which leads him into the home of an amorous teenager (Linnea Quigley) and her overly anxious boyfriend. From there, and with little explanation, he wanders aimlessly into the snowy wilderness to confront an obnoxious pair of sled-stealing suburban hoodlums. The ensuing chaos is suitably graphic and strangely entertaining, though you can't help but wonder how, exactly, Billy knows where these naughty individuals are lurking at any given moment. Of course, were these unaddressed supernatural abilities absent from the film, the entire narrative would have been more than little boring.

"Silent Night, Deadly Night" isn't so much a slasher as it is a gory, slightly misunderstood character piece. There's no real plot to speak of, and a large section of the film is focused primarily on Billy's increasingly unstable behavior. Charles E. Sellier, Jr.'s direction is serviceable, as are the mildly cheesy performances we're forced to spend the majority of our time with. Be that as it may, this is easily the best Christmas horror film in the whole rancid bunch, and it delivers enough visceral thrills to satisfy even the most hardened of horror hounds. A word to the wise: Avoid the sequels like your Uncle Tony’s ingrown toenails. I learned that lesson the hard way.