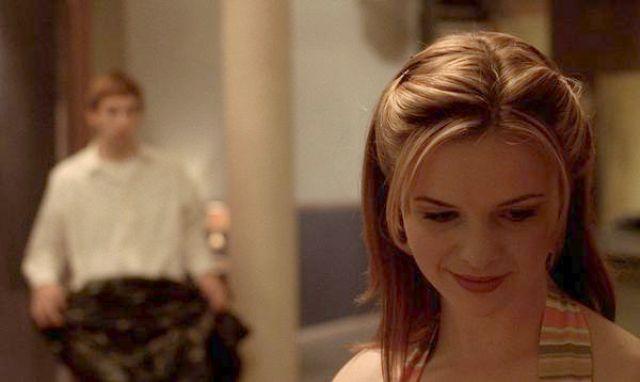 A few years back Adam Green set the horror hype machine ablaze with his self-proclaimed “old school American horror” film “Hatchet”. The film was breathlessly awaited with many expecting it to herald the second coming of the slasher film, but upon its release audiences were treated to a fairly entertaining but ultimately only middling slasher film remarkable only in that it wasn’t as brain-gougingly terrible as most of its competition. As always, the hype was followed by a backlash and when the dust had settled it was clear that while Hatchet wasn’t the genre-defining film many had hoped it might be that Green was a talented, solid director with a genuine affection for the genre and a clear understanding of what makes horror fans tick.

This brings us to “Spiral”, Green’s follow-up to “Hatchet”, co-directed, co-written and starring “Hatchet’s” Joel Moore. “Spiral” can only loosely be defined as a horror film. Where his previous movie was very much a gore-soaked throwback splatter film, “Spiral” mostly leaves the grue and violence off screen and shoots for more of a psychological thriller vibe. Many times the label “psychological thriller” is code for “neutered horror movie for people who don’t watch horror movies” and sadly enough, in this case the description applies.

Mason is a goofy-looking sad-sack with a shitty job at a phone bank and only one pity-friend, his co-worker Berkeley. He’s still haunted by his mother’s murder at his father’s hands and his only solace is in listening to jazz records and sketching and painting women. His perky co-worker Amber takes an interest in him and an awkward friendship begins between the two. When Amber learns that Mason is an artist she insists that he paint her. As their relationship develops Amber discovers that Mason might be more disturbed than she realized.

The fatal flaw in “Spiral” is that it falls into a trap that ruins far too many films these days: it’s a twist in search of a movie. Like a lot of these shock-ending films, it feels like the twist was the first thing written and the rest of the film was written in around it. That would explain why most of the film is fairly meandering, even boring and not much happens except Mason and Amber spend time together with him acting twitchy and distracted and her being quirky and “adorable” . Until about the last 20 minutes it feels like a plotless indie character piece and, except for the occasional jump scare in a dream sequence, it’s never really clear what kind of movie you’re watching.

The acting is good but one-note. Amber Tamblyn plays a standard manic pixie dream girl and Joel Moore plays the socially awkward Mason a little too well. No matter how unpredictable and full of life she is, no girl in the world would spend more than 5 minutes talking to Mason before excusing herself to make a quick escape from the creepy weirdo, much less insist on going alone to his apartment with him to partially disrobe while he paints her.

The twist isn’t particularly obvious, but it isn’t particularly interesting either. To tread lightly on the spoilers I’ll just say it might have had a little more impact if it weren’t almost exactly the same twist as at least two of the most popular films of the last decade and scores of other less popular films. Rather than an earth-shattering moment, the revelation is more or less shrugged off. It doesn’t really matter though because bizarrely, the twist is immediately followed by a second twist, or more accurately an “untwist” which effectively undoes the twist and puts things back the way they were. Ever had your mind unblown?

As unremarkable as it is, there probably is an audience for “Spiral”. It’s precisely the kind of mediocre, undemanding thriller that casual movie-watchers eat up. The kind of movie-watcher who will check out a movie because they liked the director’s previous work will probably not be so easily impressed. “Spiral” might just be a young director’s attempt to not be pigeon-holed as a horror director and to prove that he can handle a middle-of-the-road mainstream movie with a cast of semi-well-known actors. If this was indeed nothing more than a resume-booster for Adam Green, let’s hope that he’s ticked that box and now can move on to more interesting projects.