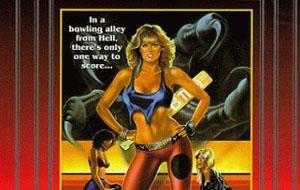 The spanking episode is followed by a whipped cream fight, which by any man's logic of course leads to the group shower scene. I must say, that having all of this go down in the first 15 minutes of this movie won me over big time. I mean I could have watched a dude taking a crap for the next hour and a half and I would have been pretty satisfied. The sorority sisters weren't too satisfied obviously though, because they send Stevens and Bauer (and the 3 hapless geeks) to the bowling alley to steal a trophy.

So, you may be asking yourselves, where is the horror in all this? Well besides the fact that this was obviously way before the days of female grooming (Brinke's growing a chia pet apparently), the kids manage to spring an evil imp from his lair. Not just any evil imp, but a jive-talking imp who also likes to refer to himself in the third person (naturally). How did they set this imp free you ask? Well duh, they knock over a bowling trophy that has housed the imp for 30 years. Not willing to entertain such silly notions as a plot, the movie progresses with the imp providing each of the members of our doomed group one wish.

Almost all of them make their wishes, with the most ingenious one being one of the nerds wishing to have sex with Bauer. Needless to say she's naked for the rest of the film. The only two holdouts in all this wish taking are a badass punk rocker chick who just happened to be robbing the bowling alley at the same time the kids arrived (played with spunky enthusiasm by Linnea Quigley) and the biggest nerd of the group, played by Andras Jones in what may be the most bizarre performance this side of Crispin Glover in "Friday the 13th: The Final Chapter". But again, I digress. When the wishes go wrong, they go horribly wrong, and some of the group begin to be slaughtered by some possessed sorority chicks.

The third portion of the film is really owned by Jones and Quigley, who kind of team up as the odd couple and begin to try to figure out how to stomp the imp. Along the way they run into a hilariously deaf janitor, who of course knows A LOT about the imp. He gives his requisite plot-clarification speech, and then they go off to try to stop him. Unfortunately, Bauer gets murdered just as this part gets started, so we're deprived of her assets for the rest of the film. And even to my surprise, Quigley stays distractingly clothed (what kind of 80's film is this?). Regardless though, the sheer cheesiness of this entire situation, and the many unintentionally funny moments kept me wildly entertained right through till the end, when the imp is stopped by what else, a tin can.

I was in the mood for something light and drenched in 80's atmosphere tonight, and this movie delivered on that front ten-fold. With a svelte 80 minute running time, there isn't really even enough time for you to get bored, and if you do you can always rewind back to the beginning and check out that shower scene again (which by the way, is worth the purchase price alone). Sure the genre was cannibalizing itself in the late 80's, but if that's what had to happen for wonderfully campy stuff like this to come along, than so be it. Can you resist the lure of the Sorority Babes?

Movies Like Sorority Babes in the Slime Bowl O Rama

One Cut of the Dead