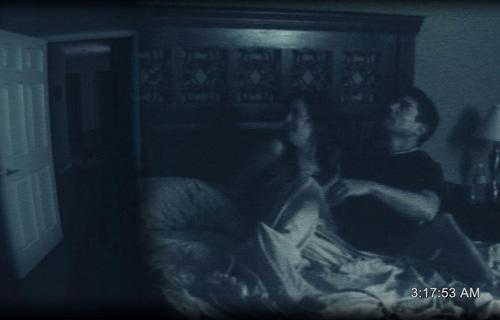 Fear is an incredibly subjective emotion. What scares one person may make another laugh, or barely raise the pulse of still another person. Since horror films deal in fear, it's only natural that eventually the artform would become proactive in directly manipulating the way in which people experience a film. The first-person, or "found footage" horror narrative, is designed to do exactly that. By placing the audience in the driver's seat of the horror, you are attempting to limit their ability to retreat from what they are seeing, make it nearly impossible to separate yourself from the screen and therefore the events unfolding in-front of you. How well this manipulation is pulled off is key to the success of a film like "Paranormal Activity".

We start out by meeting our couple, Katie and Micah, the latter of which has just purchased and brought home a rather pricey piece of camera equipment. Through an introductory conversation we learn that Katie has been experiencing strange phenomena at night while the couple sleeps, and this is Micah's attempt at figuring out exactly what is happening. Katie is uneasy about the proposition, but decides to let Micah try his hand at playing Paranormal Investigator.

What we don't learn until later, is that Katie has experienced these occurrences her entire life, and the entity that is following her from place to place is getting stronger. It's a fact that Micah was unaware of until the couple moved in together, although based on his nonchalant demeanor throughout the majority of the film, it's clearly not something that he's overly concerned with. He would rather play his stereotypical macho power games, shouting into the shadows and calling the demon out for not being man enough to step out into the light and face him head on. It's a typical American male way to respond to such a situation, and one that we know is going to get him in trouble sooner or later. After all, unlike these two, we've seen plenty of ghost movies.

Which is what at its core "Paranormal Activity" really is. It's every ghost movie you've ever seen, or at least a stripped down version of one. It comes decorated with all of the cheap parlor tricks and accouterments that you would expect from such a film. Loud banging sounds, lights flickering on and off, doors slamming shut, and even the good old Ouija board thrown in for good measure. The biggest difference of course is the first person narrative style, which does allow director Oren Peli to extract a bit more mileage out of these staples than they have no doubt seen in quite some time.

There are some genuinely creepy moments in this film. Mainly it traffics in the type of scares familiar to those who have ever been sent a viral link asking them to "stare at your screen and find what's wrong with this picture". After mashing your face up against your computer monitor like a rube for about :30 seconds or so, typically a screaming ghost will come flying at you and make some Godawful noise that is sure to cause you to soil your underpants. Some of the best moments in "Paranormal Activity" come from that exact same ruse. The couple sets the camera at the foot of their bed every night, and it just so happens that on the left side of their wide-angle lens you have a clear view down a dark, spooky hallway. In moments of silent fear, you can't help but stare down that abyss and let your imagination run wild as to what is happening on the other side.

It's a simple and effective tactic, but it's also one that tends to grow old after too long. Despite its innovative pretense, the first hour of this film is still filled with the same William Castle inspired dreck that makes modern ghost films almost unbearable to sit through. The pacing suffers not only from this, but from the extremely limited cast. There are 4, and only 4, people on screen in this entire film. About 90% of it plays out with just the main couple. That is a tough scenario for anyone to work with, let alone an independent director making a film for $15,000.

And I think that may be the most important point to take home here. As an independent film shot on a limited budget, Oren Peli has crafted something that he can be very proud of. Had I viewed this at a film festival, or a horror convention with an amped up crowd, I may have been more wowed by what was unfolding onscreen. Normally when a film is over and I hear a patron next to me exclaim, "that's it?", my horror fan instinct kicks in and I immediately feel the need to defend the film. That didn't happen this time.

The midnight screenings it has enjoyed over the last few weeks have no doubt been made up predominantly of those who love horror films and were willing to go along for the ride. Now, facing the harsh judgment of the cynical mainstream movie audience, something tells me it will not fair quite as well. Considering how little the film cost to make, there's no earthly way for it to be a losing proposition for anyone at this point. That is, except for those who buy too deeply into Paramount's own masterfully manipulative promotional campaign. Trust me, in order to fully enjoy "Paranormal Activity", separating yourself from that hype is the best course of action.