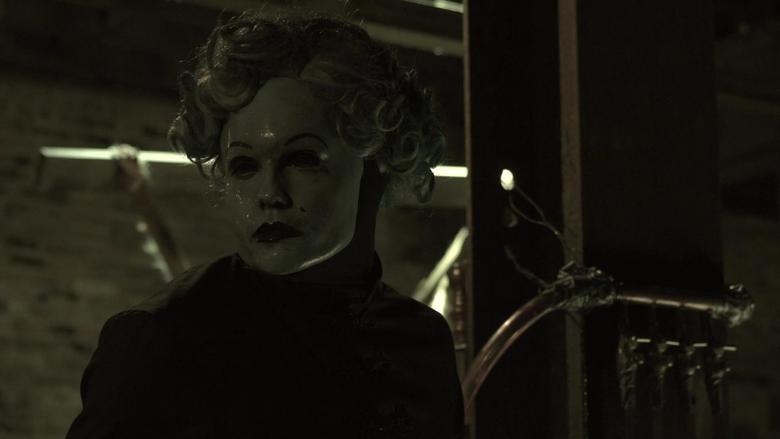 When it comes to direct-to-DVD fare it could be considered high praise to say a movie isn't a complete waste of time- or that it could have been so much worse. Such is NOT the case for the ultra low-budget mystery slasher Kill Game- a film trying so desperately to be a hybrid clone of 90's style slashers. Yet, even with the low bar attached to direct-to-DVD horror Kill Game probably won't even muster a 'meh' from the least demanding viewer.

Grace Arbor is a town seeking answers when the dead bodies begin to pile up, all seemingly connected to a group of previous graduates known for pulling the world's most uncreative pranks on each other (shooting someone with a paintball gun is considered a prank in this...for real). When an outsider comes to town with a direct connection to a past tragedy everyone seems to know who to point their finger at, but in fact the mystery is just getting started.

Kill Game is a film that's constantly working against itself. Everything about it that's "good" is undermined by something mind numbingly stupid. Cliched horror tropes are checked off like a grocery shopping list with the cherry-on-top being the baffling last act which defies explanation. Suffice to say, the final two items to cross of the list of tropes are (1) terrible character decisions and (2) a poorly conceived trick twist, and the film crosses them off with gusto.

Kill Game borrows from bargain basement 90's slashers, but none more so than I Know What You Did Last Summer. Even if you're like me and have a soft spot for IKWYDLS there's no denying the absurdity and predictability. Kill Game though, believes that it is smarter than you and proves as much using a reveal no sane person probably would have guessed based solely on presentation, but can easily guess just moments before it happens.

The real shame of it all is that in spite of the poor understanding of the genre is that Robert Mearns visual style works. There are a few great set pieces,  scene composition, and interesting kills (most of which happen off screen, but the concepts are solid), but it just so happens that everything else that rounds out those aspects in making it a film are terrible. Perhaps the biggest thing dragging down the film's quality are it's actors and script. Not every great movie has a mind blowing script, but they at least have likable actors with some level of chemistry. Some have a great script but maybe the actors can't find the pathos in the characters. Kill Game misses on both points. The actors aren't likable, there's no chemistry, and the words they are vomiting out of their mouths are sometimes unfathomable. The pinnacle of stupidity comes in the last act when a character's decision during a standoff has great implications to his/her fate, but the character does something so baffling you might knock yourself out face-palming.

There's no more blunt way to say it, Kill Game is stupid. Would a new cast and re-worked script fix it? Probably not. The film is working from material recycled twice even three times over and should you find yourself compelled to check it out then the prank is on you- one much crueler and mean spirited than any actually conceived in the film itself.