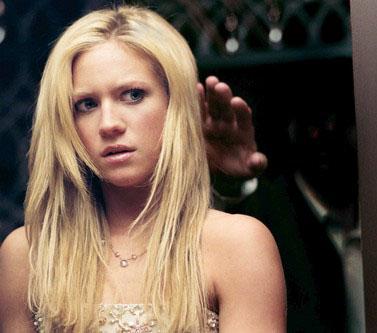 This "Prom Night" is a remake of the 1980 film of the same name starring Jamie Lee Curtis... only, it isn't really. Our main character Donna is played by up and coming teen movie star Brittany Snow. We learn from an opening flashback that Donna ran into some trouble as a 15 year old piece of jailbait ass, after one of her teachers became a little too obsessed with her. One night a few months after being fired for his indiscretions, he breaks into Donna's home and kills her parents as she watches from the shadows.

My first thought was, "maybe you shouldn't be so hot then", but I digress. We then flash-forward three years, to the day of Donna's high school prom. Through some very subtle story telling (aka a prolonged shot of her anti-psychotic meds) we find out that Donna is suffering from some pretty major stress as a result of watching her mother get filleted years earlier. She does her best to shrug off the anxiety with the help of her Aunt and Uncle (they were also white people so I just assumed), who are now her legal wards after her parents' demise. Cue jock boyfriend coming to pick her up for the prom and a limo full of disposable assholes and you get the basic set up.

In a SHOCKING twist of fate, Donna's stalker manages to escape from a maximum security prison on the very same day as her prom, murders some poor sap, steals his car and identity and heads for the hotel where the prom is taking place. I know, I didn't see that coming either. When the grizzled cop who worked on the original case finds out, he heads to the hotel with the intentions of hanging in the shadows to ensure Donna has a safe prom. No reason to panic, right? After all, it's just a psycho who killed her parents that is quite obviously on his way back to finish the job. To quote Randy from "Scream", there's a "very simple formula" to all this. "If they watched Prom Night they'd save time". See what I did there?

This version of "Prom Night" is an in-name only redux that boggles the mind with suckage. To give you an idea, take one of the worst late 90's slashers you can think of, let's say "Valentine" for arguments sake. Then toss that in a blender with the insipid MTV show "My Super Sweet 16" and you will begin to grasp exactly what kind of film this is. It's rated PG-13, but I would venture to say that they would have had a decent argument for PG. There is almost no visceral violence in the entire film. And I'm not suggesting that the film was cut, because it's quite obvious that it was shot with the intentions of not showing anything. Everyone gets dispatched with a knife, mostly off screen, and those who are not seem only to look slightly inconvenienced that they're being offed.

The killer, played by slumming journeyman actor Johnathon Schaech, is about as intimidating as you can be while wearing a corduroy suit and a baseball hat. For someone trying to slip around a hotel unnoticed, he sure as hell did his best to appear sketchy to everyone who talked to him. I would say that he was resourceful, except everyone fell over themselves to help him out at every corner. That is the only prison I've ever seen where a metal grate on the ceiling is the only thing stopping a prisoner from escaping. On the other hand, he was able to make several dead bodies leap from their hiding places when he was nowhere near them, so I guess that is pretty nifty.

The first hour of this film is brutal to sit through. We cut back and forth between completely unrelated prom-type scenes. The ridiculous limo montage, dance-floor montage, class memories montage... while occasionally being taken away to watch the killer stalking around or killing a meaningless character. When we finally do get to the meat of the finale (aka the killer getting his hands on Donna), it's over way too quickly. The plot then clumsily over-extends itself and attempts to have a double climax. The problem is, from the very first frame you don't care about anything going on, so every moment that the film delays the credits seems like hundreds of midget kicks to the sack... and you can imagine how good that feels.

I've already given this film more attention than it deserves, so let's recap. I became so bored during "Prom Night" that I began attempting to see how loud I could fart during the quiet scenes. Hey, movie hot dogs will do that to you. Then some douchey teenie bopper in the back row hit me in the head with a Raisinette. That would normally send me into a homicidal rage that only the taste of fresh blood could quell, but the thing is, my soul was so crushed at that point that I couldn't even bring myself to care. Is there anything else that needs to be said?

This remake does the unthinkable in that it's actually worse than the original "Prom Night" (sorry folks, it's not good). It's also the worst case of PG-13 pandering I have ever seen. It's a film without passion, without a pulse, without anything worth even mentioning really, so I'm going to have to end this here before the vein in my head starts to pop out. Even if it's playing late night on cable and you're blasted out of your mind, avoid this one at all costs.