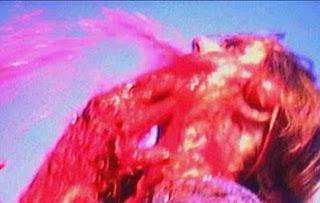 I love guerrilla filmmaking. It is the only way to bring unfettered ideas to the screen with a high degree of faithfulness to the filmmaker’s original vision. Equally true is that it is the easiest way to make an unintentionally bad movie by having eyes bigger than your wallet. That said, most of the time if someone goes for broke with their vision and refuses to compromise they end up with a rusty little masterpiece as goofy as it is earnest. In the late 80’s/early nineties several now notable no budget horror pics emerged from a fledgling DIY underground. “Shatter Dead” and “The Dead Next Door” gained convention level cult acclaim by setting lo-fi zombie terror in bustling Middletown, New York and revenant Mecca Akron, Ohio, respectively. In the same mold is Leif Jonker’s gore-nado of a film “Darkness” which in 1993 set the flat vistas of Kansas on edge with a madhouse epic Vampire Apocalypse shot for less than the blue book of a used Fiero.

“Darkness” begins with a gas station massacre that announces the arrival of Liven to a small Kansas town. Liven is a nasty be-mulleted vampire who has decided that in this particular locale he won’t just hand pick a couple of the yokels for feeding and conversion but rather bring about a full scale bloodsucker doomsday. The only survivor of his petrol stop savagery is Tobe. Tobe rustles up a couple guns and sets off across the countryside trying to avert the coming cataclysm. Along the way he meets a van full of concert-goers who have managed to escape the first wave of suction and infection by, well , being at a concert. Tobe’s carpool of mud flap coiffed teens is eventually thinned out to just T-man and two others and that trio must fight their way through the log dark night of the vampire. If they make it to sunrise their reward is another day of life.

Darkness is so comprehensive in its failed elements that even a tolerant viewer could be forgiven for shutting it off after the first sequence. That action wouldn’t come without a price though. For while there is nothing approaching an adequate performance, good cinematography, editing prowess, sound engineering, plot continuity, thoughtful dialog, shot selection or imaginative use of film grammar, “Darkness” does have a gigantic bloody heart that pumps life into most of the 90 minutes. Granted a good ration of that life needs to be supplied by the wit of the viewer. Watching this movie makes you duty bound to lampoon its unending torrent of straight-faced ridiculousness and nearly complete lack of competent craftsmanship. Truly there is enough material in “Darkness” to crash Tom Servo, short out Crow and send Mike and Joel scrambling for the airlock.

Leif Jonker and crew do get some things right. The atmosphere is pretty good during the daylight sequences. Also the music, ubiquitous though it may be is a nice homage to the likes of Goblin and John Carpenter. Then there are the practical effects; what they lack in believability they make up for in gumption and quantity. In fact this might just be the most appropriate way to praise “Darkness” overall. The moxie and unbridled excess of this penniless vampire tale is so gleeful that provided you can laugh at the movie it should be nearly impossible not to enjoy it. The energy and the delirium of the kill scenes and the barrage of amateurish flatness, pointless dissolves and incomprehensible dialog all fuse to create a very watchable cringe-a-thon.

Call it my love for the no-money maverick or just simply a schadenfreude moment, I am gonna give “Darkness” a conditional recommendation. Outside of “The Room” I probably have never given a seal of approval to a film with less technical proficiency. But Leif Jonker like Tommy Wisseau is a true believer and sometimes that is enough to create a unique and lasting impression. Jonker’s commitment to gore, even to the point of narrative paralysis and quasi-Python absurdity is inspiring. “Darkness” skips merrily past the wackiness of “The Evil Dead” with tongue missing from cheek and finishes with a screaming, gargling blood bukkake Armageddon as preposterously manufactured as anything Jon Mikel Thor ever dreamed up. I don’t know about you but I think any film that manages all that on a happy meal budget deserves some sort of plaudits.