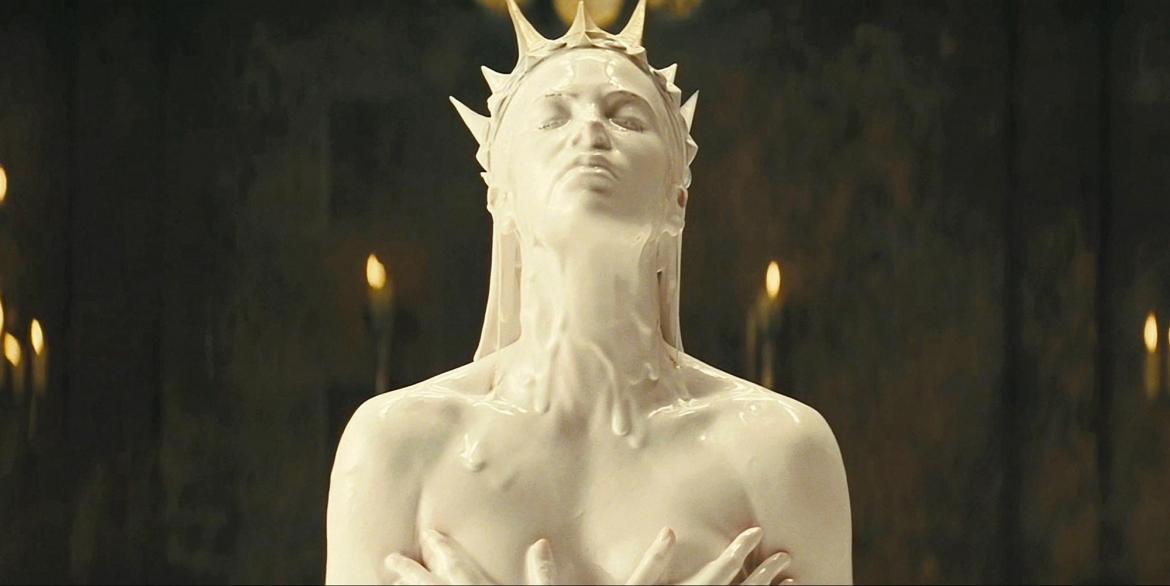 “Snow White and the Huntsman” is a Hollywood engineered butterfly crawling from a craggy, slippery, gooey cocoon. Throughout the film I couldn’t help but imagine how incredibly different it would have been had it been made under looser financial and studio concerns. There are just enough weird, gross, and critically minded themes reappearing throughout that it makes the remaining 75% of what we are given that much more frustrating and exhausting. This is particularly evident in the way the film’s main antagonist Queen Ravenna (Charlize Theron) is framed. At once we are given a full-blooded, human, and interesting antagonist only to have any hope for a challenging narrative pulled out from under us because that’s just not how the story goes. Rather than more thoroughly exploring the given “evil queen/step mother” angle we are instead given a relatively sterile, by the numbers, oddly toned action-adventure version of a story we have already heard.

Directed by Rupert Sanders, “Snow White and the Huntsman” stars Kristen Stewart and Chris Hemsworth in the titular roles. Born to loving King Magnus (Noah Huntley) and Queen Eleanor (Liberty Ross) Snow White has been blessed with a resilient, “pure,” and “defiant” spirit which will come to the kingdom’s aid during some foretold dark times. Following the death of her mother, a mysterious army appears carrying a female prisoner named Ravenna (Theron) whom King Magnus rescues and promptly marries. But on their wedding night, Ravenna murders the King, imprisons the young Snow White, and usurps the throne. Several years later, Ravenna’s magical powers have spread across the kingdom, turning what was once lush into grim and decaying wastelands. In an attempt to cement her place of power and everlasting youth, Ravenna is instructed to consume Snow White’s heart. Matters prove difficult, however, when Snow White escapes into the “Dark Forest” where Raveena has no power. Employing the help of a drunkard simply known as “Huntsman” Raveena seeks to claim the girl’s heart before she realizes her full potential.

Like a majority of other reimagining films that have been released over the last decade, “Snow White and the Huntsman” is bent on establishing itself as a “serious” film by dressing its characters and mythologies in the harsh light of severe sincerity. Characters speak in that half-heartedly constructed faux olde English dialogue that requires almost everyone to speak in ways that are either far too operatic (“Let them come”) or unnecessarily dramatic. Matters are certainly not helped by the scant and messy dialogue. One of the meatiest lines we are given is “Do you drink to drown your sorrows?” Characters attempt to relate, flirt, and spar with double talk lines that seem only to circle back to where the conversation began in the first place.

The film doesn’t earn any of the character relationships or supposed charisma we are asked to believe in. We only know that people care about one another because they say exactly that in oddly phrased lines. In particular, Hemsworth and Stewart seem to be teetering on the edge of recycling some of the character tricks picked up from their recent stints with some heavy franchise lifting. When Stewart finally gets to flex those destiny-muscles we’ve heard so much about we are given a rather silly sounding rally the troops diatribe against Ravenna that leaves the viewer rather indifferent to the outcome of this presumably epic conclusion. Despite all the forced grand imagery—say hello to your old flame background slow-motion fire—Stewart never quite elevates Snow White into the grand, prophesized leader she is said to be.

Then there is the group of nomadic dwarves displaced by Ravenna’s rule…why were they in this movie? It seems like the pre-production meeting for these characters went something like this “Oh, yea, Disney called it Snow White and the Seven Dwarves so we should have some dwarves in here.” Got it. Tonally speaking, the group serves the function of adding some levity and “funny” buddy moments into some otherwise severe material. But the collective doesn’t even make an appearance until nearly the end of the second act. At this point the shift to some more humorous buffoonery seems strained and disrupts an already established character flow. Then there is the added bonus of our inability to understand every other word spoken by the characters through their forcibly gruff, grunting accents.

The brightest spots in this otherwise clunky and awkward film can be found in the film’s antagonistic elements and overall aesthetic work. The “Dark Forest” is a grim, gothic menace of an organism full of nasty, dangerous, and gross critters that afflict our heroes. There are some great abject moments that play up on fears of the primordial forest. Theron’s portrayal of Queen Ravenna nicely balances the more human qualities of her motivations with her menacing sorcery. We learn that Ravenna’s life has been plagued by the aggressive, sexual dominance of growing up in a feudal society where physical beauty became a curse. It is implied that in order to survive, Ravenna’s mother placed a spell on her so that she may survive the aggressive sexual appetites of men. It is a bold and interesting gesture that tries to subvert the preconceived notions of “pure” and “innocent” beauty in fairy tales as coercive, sexually violent constructs imposed by patriarchy on subjugated women. However, the film doesn’t go far enough in exploring this construct and instead falls back on the very same habits it appears to be critiquing.

“Snow White and the Huntsman” is a film that knows what conversation it wants to have with its audience. You can see potential for an interesting, challenging Hollywood film in its production. But unfortunately it becomes hampered by the presumed necessity to follow the original narrative. Theron and the film’s other antagonistic elements steal the show in such an aggressive, blatant way that I couldn’t help but be completely bored by the titular characters, the dwarves, and the overarching narrative problems we are supposed to care about.