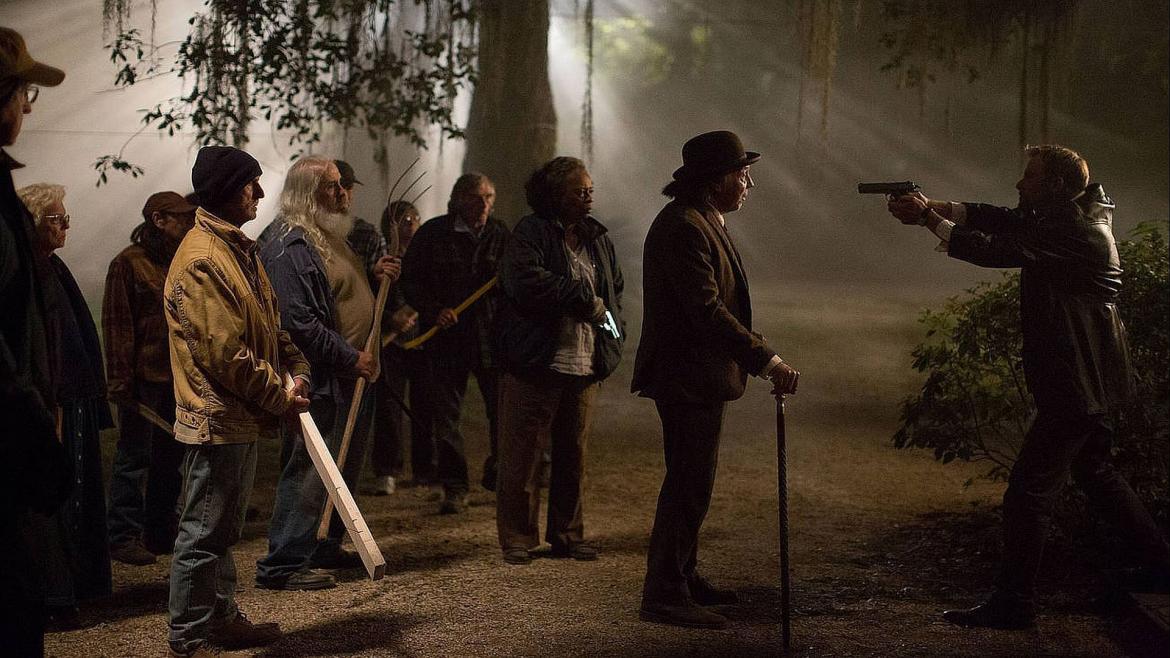 Saw sequels and ho-hum horror operas have been the calling card of Darren Lynn Bousman's career to this point. Throw in a remake and a gimmicky rush job trying to capitalize on a once in a lifetime date combination and it becomes hard to really get excited about anything with the Bousman seal of approval. Going by the definition of the word 'abattoir' it's already pretty easy to paint a mental picture of what's in store, with neither director or writer doing much to play against expectations. The result makes Abattoir an uneven and predictable horror noir with interesting ideas that never quite manifest lucidly on screen.

An investigative reporter, Julia (Jessical Lowndes), and a police detective, Declan (Joe Anderson), combine forces after Julia's sister (along with husband and young son) are brutally murdered. The culprit being a seemingly normal man who spins a confused string of clues that lead the unlikely crime fighting duo down a rabbit hole of shady real-estate dealings and supernatural forces looking to protect their secrets.

Dayton Callie growls through an eerie voiceover as Jebediah Crone when the film kicks off--"What a magnificent structure it will be," he cryptically muses. From the get go Bousman and writer Christopher Monfette start leaving breadcrumbs for viewers for a relatively short trip. There simply isn't enough tricks and turns to ever get lost in the world being woven. The central mystery isn't all that mysterious and essentially it's the human characters and emotions that provide the film the biggest kick. Bousman's need to explain everything in broad strokes with heavy handed exposition undercuts the sentiment and the message gets lost in an excess of dark sweeping visual effects during the finale.

Fans fond of old fashioned radio plays will stick to Bousman's storytelling style here which plays well for the majority of the film. The film's climactic stage is where the director forgets that all too important filmmaking note that it's better to show and not tell. The titular abattoir is impressive enough to stage the dark story and themes but Callie's overly scripted monologues and explanations--while theatrical and entertaining--feel like a elderly relative telling their favorite story for the 100th time. One can only roll their eyes so hard before sparking a killer headache.

While certainly not for a lack of trying, Darren Lynn Bousman can't quite master the feng shui in his house of horrors. Abattoir is--by definition--a slaughterhouse, but this one is heavy on the slaughter and less so about subtlety. Bousman's ambition helps him step out of the shadow of the Saw franchise and into a whole new set of genre cliches. Abattoir is worth a knock or two for genre fans, but many will find that in the end no one's home.