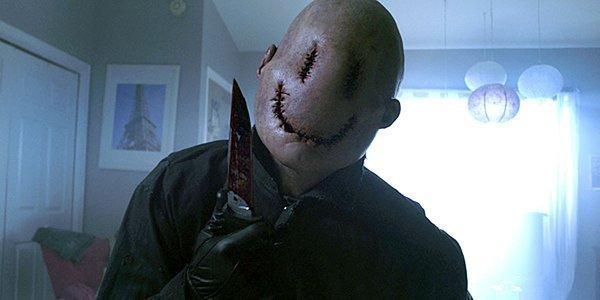 "Smiley" is a film that has been bouncing around the news pages of horror sites for some time now. The killer's mask is disturbing and very effective at creating a sense of dread along the lines of the greatest slasher villains. This mask is the reason it's maintained interest throughout the horror community and kept me curious enough that it remained on my radar. The realization that the mask was all the movie had going for it quickly moved my interest from prolonged curiosity, to consisten dread.

Ashley (Caitlin Gerard) is a college student moving into a new house with a wild roommate named Proxy (Melanie Papalia). Ashley has always been the responsible, conservative and uptight figure but Proxy coaxes her into going to a party. This party features a collection of friends that only know each other via online video chat sites. Zane (Andrew James Allen), the party's host, proceeds to tell the tale of Smiley to Ashley and Proxy. A modern take on Bloody Mary in which during a video chat one person must type, and I'm not kidding here, "I did it for the lolz" three times into the chat box. After that Smiley then pops out and kills the receiving chatter. The girls try it out for themselves resulting in the death of a stranger online, thus sending Ashley into a paranoid nervous breakdown convinced Smiley is real and that she has to stop him.

It's hard to take the movie seriously from its cliched and groan inducing premise. An extended version of Bloody Mary morphed onto shades of other horror films with an atrocious cast, it passes being taken seriously and steam rolls into monotonous travesty. Avoiding spoilers for the poor souls that might still want to view this film, the third act offers some twists and turns for the killer. These are not good twists. The plot's finale is visible miles away from its conclusion and the narrative is so threadbare it's constantly padded with tiresome scenes of Ashley seeking out authority figures to lament her frustration. Though the biggest disappointment ultimately is the killer, Smiley. A wonderfully realized mask concept is wasted on a killer with no bite, menace or fun. The few instances inside Ashley's head where Smiley becomes a supernatural force are legitimately interesting and perked my attention. But that's all they are, instances.

The cast is lead by Caitlin Gerard, who many may recognize from her role in "The Social Network" as the intern Justin Timberlake gets caught with doing cocaine. Gerard commits to the role and does her best to play the emotional levels needed for the role, but her performance is uneven and delivery grating. Though she's the only professional amongst the cast trying to work within the material, excluding Roger Bart and Keith David's cameos. The supporting performances and bit players are disturbingly bad stereotypes of various individuals. And their ultimate motivations are insufferable and lacking in any legitimacy.

"Smiley" had me engaged from afar for what seemed like years. The ever so often image of the film's killer always gave me hope that this might be an intriguing indie that could even have legs for a sequel. To my dismay, and I imagine the horror community in general, "Smiley" is a YouTube generation's attempt at creating horror. It lacks substance, intrigue, and its final revelations are so misguided and self aggrandizing that it kills any potential for even a cult fan base.