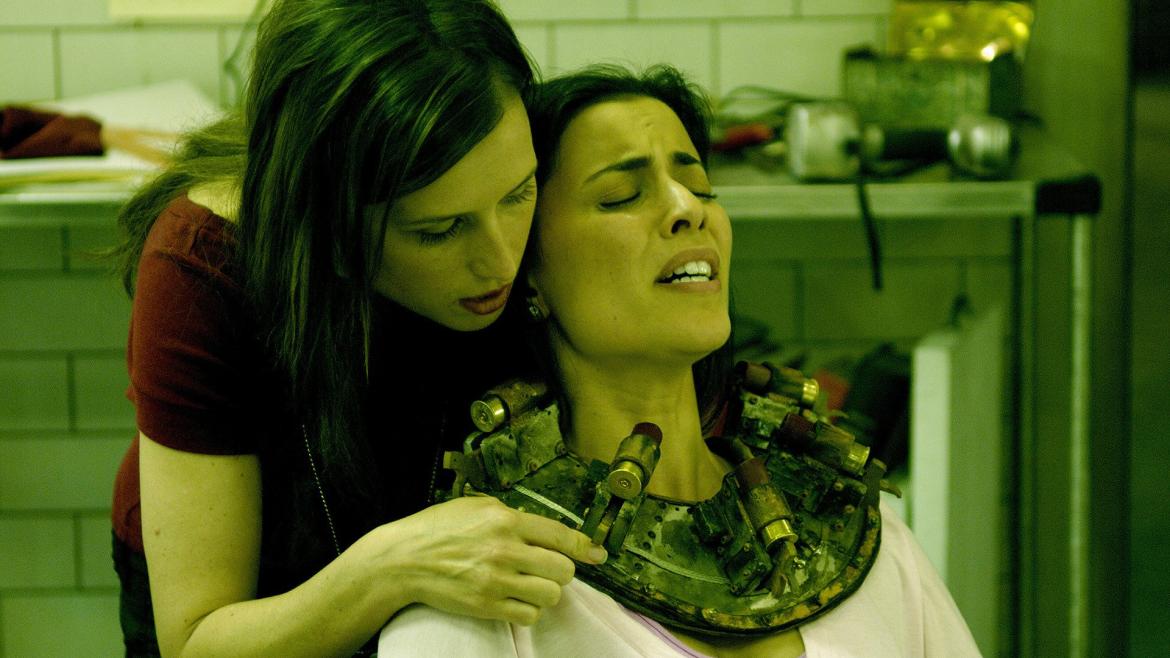 Saw had the fans it did because of its original twists; Saw II was likeable insofar as it was extreme and cartoonish. Both were low-budget hits, so Saw III gives us a conundrum: the cruddy production is noticeably improved, stripping the movie of some (though not all) of the goofiness that made the first outings ironically palatable. Is this movie “better” enough to justify the torture being harder to watch?

Saw III is roughly split into two halves: in one story, depressed surgeon Lynn (Bahar Soomekh) is kidnapped by Jigsaw and his protege Amanda (Tobin Bell and Shawnee Smith) to learn some Jigsaw-esque lesson about her latent survival instincts while being forced to keep the killer himself alive long enough to watch the results of his latest cat and mouse game (Lynn’s participation is ensured by a collar pointing no fewer than six bullets at her head, set to go off the minute Jigsaw flatlines).

The game in question is being played by a similarly depressed human specimen, a man named Jeff who is paralyzed with bitterness following the death of his son in a traffic accident. Jigsaw has dropped Jeff into a maze populated by the players of this tragedy (and subsequent legal proceedings), giving Jeff an opportunity, room by room, to choose mercy or vengeance for witnesses, lawyers, and the driver himself. The set up is stuffier and more moralizing than the “games” in the previous installments, and the parallel narrative structure only draws undue attention to how neither of these plots would have held up well by themselves.

Fans will notice something else in the film’s early scenes: the return of Detectives Kerry and Matthews (Dina Meyer and Donnie Wahlberg). I’m guessing few would have minded never hearing from them again, but Saw III cares--a lot--about continuity, and feels more like a chapter than a standalone episode. Yes, there’s a storyline here with new characters, but they’re shoehorned into a script overstuffed with backstory, flashbacks and foreshadowing to even more sequels. In one of the stranger sequences, we see several unnecessary minutes of Amanda helping Jigsaw construct the kill room in the original film. They wipe down surfaces, paint things with fake blood--we see everything but Amanda’s trip to Home Depot for the power tools. Замечательная идея поиграть в казино в игровые автоматы делюкс от популяргоно клуба вулкан.

But speaking of how the sausage is made, the movie has its gruesome torturous highlights: I was reluctantly impressed by a machine that drowns its victims in the liquid produced by a blender full of rotted hog carcasses. Shut it down, torture-porn directors of the world, you are never in your lives going to out-gross that. A scene when Lynn performs brain surgery on Jigsaw with the power tools she manages to scavenge from his warehouse is just as disgusting, and also notable for the duration and sheer number of shots the director sets up to take the audience through many, many minutes of the mess.

Saw III hews close to its predecessors with preposterous but surprising twists. At one point in the final act there are several major reveals in what feels like fifty seconds. The moment is laughable but charged, and pushes the story straight into the set-up for another sequel: Jigsaw reveals himself to be the killer who keeps on killing in a way most slasher villains couldn’t even dream of.