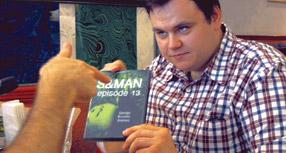 Director J.T. Petty has a unique and interesting voice and a yen to tell stories that possess a good deal of freshness. “Soft for Digging” was a laudable achievement on a minuscule budget and “The Burrowers” was a well played parable on the costs of expansionism. In 2006, prior to “The Burrowers” Petty aimed his documentary camera at the vicious outer margins of independent horror cinema. In doing so he also took his flare for off-beat storytelling into the murky territories of documentary/mockumentary fusion. The resulting product was a film called “S&Man” (Sandman).

“S&Man” introduces us to a core group of splatterists, actors, provocateurs, and academics whose opinions form the spine of a wide ranging debate on the motivations, explorations and pathologies of the uberviolent trends in modern horror. The primary foci of the filmmaker group are: Debbie D, a scream queen and producer, Bill Zebub mastermind behind “Jesus Christ: Serial Rapist”, August Underground Chieftain Fred Vogel and Eric Rost author, star and distributor of the “S&Man” series.

Debbie D seems affable and enthusiastic about her work. She also seems mildly reluctant to really say anything that might paint what she does in a negative light. Vogel is a baby-faced loon who matter-of-factly cops to his perversity but is less assured when he talks about his motivations. Bill Zebub is a beer-swilling button pusher whose scattered process marries inebriated confusion and passive aggressive sexual politics. While Zebub professes to being more about titillation than innervation Petty’s visit to his film set pulls the curtain back just enough to show us that Bill’s desire to provoke is both a lifestyle and an artistic choice.

Author and film professor Carol Clover, who penned the book “Men, Women, and Chainsaws”, about the role of gender politics in horror cinema, contributes some overarching social and psychological context to the explorations. Clover and Petty discuss the shifts in horror films over the years that have made the audience identification with the killer’s perspective more appealing. Clover admits to being somewhat put-off by it and less than thrilled about what it may say about the culture we live in. In that same vein, the director visits a center for the study of Sexual deviance. Here he extracts a lesson on the possible escalations of paraphilia (psychological conditions that manifest in deviant sexual behavior).

Checkerboarded throughout this documentary structure is the tale of Eric Rost. Rost’s S&Man series is a group of non-narrative, shot-on-video stalking videos that culminate with the subjects being killed in remote locations. At first he seems to be just another purveyor of mock snuff who is frequenting conventions to get the word out about his movies. But Petty becomes more intrigued with Rost when he proves evasive about his techniques and the whereabouts of the actresses he uses. Eventually Petty decides to go straight ahead in a search for clarity from Eric. It is a search that may yield some answers he didn’t see coming. На сайте freespinsinfo.ru собраны только актуальные бездепозитные бонусы

This film is never boring; it is well constructed narratively and features some top drawer editing work. But “S&Man” carries the same cross born by every horror mockumentary since “The Blair Witch Project”. That being that fusing the real world elements with fictional material within the same framework has the unintended consequence of reintroducing disbelief and putting the viewer on the look out for things that feel less than authentic. Here it really robs a novel idea of a great deal of its power. For example, when Petty gets the notion that Rost may in fact be harming these women, he asks to talk to them but upon finding Rost unwilling to facilitate a meeting he goes no further to ascertain the girls’ whereabouts. It’s a small dropped detail that is amplified because of the narrative style that was chosen.

Along similar lines the film’s calculated approach to Rost’s genuine snuff is intentionally non-cinematic. The fact that real snuff would look unconvincing on video is reiterated several times during interviews, but somehow this doesn’t serve any function except to explain even excuse the lack of impact in Eric’s videos. It’s a sizable problem given that these segments should be the ones that catalyze the central ideas and leave the viewer feeling haunted and uncertain.

Petty still does a lot well given some of the limitations cited above. For instance, the degree to which the interviewees are complicit in the storytelling process is for the most part nicely unclear. This allows the viewer to really absorb the food for thought with regard to our desire as consumers to see increasingly vicious depictions of brutality. The on-set stuff with Bill Zebub is very well assembled and manages to inspire a mixture of pity, frustration, sympathy, and dislike for the director. This section is in fact a better side by side companion piece to Clover’s fears about cultural meanings than any and all of the Rost material.

As I said at the outset, I think JT Petty is a promising voice for the future of heady horror cinema. Having said that, “S&Man” is probably best viewed as an early idea; one that has some value but ultimately misses the mark in too many important ways. The most significant reason for this is that the creep and tension factors in its fabricated passages are undermined by an approach that draws attention to the non-cinematic and stagey qualities of the production. The good news overall is that while Petty’s subsequent film “The Burrowers” may be a more orthodox concept it is also superior in execution and better about delivering its ideas to the viewer with clarity and concision.