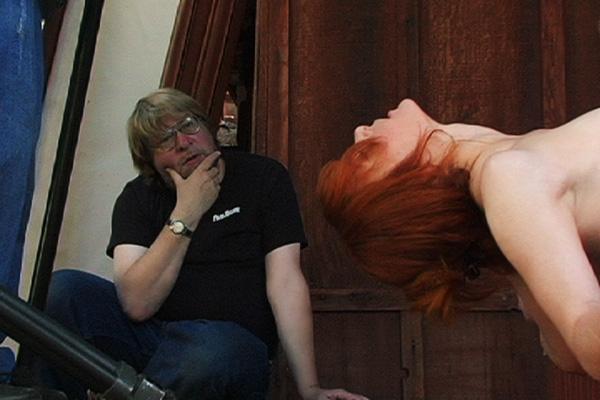 There’s a good chance you’ve seen, and probably are a fan of, a Jim Wynorski film. He’s created some B movie classics like “Chopping Mall” and “The Return of Swamp Thing”. He’s also responsible from a majority of the films most people affectionately refer to as “Skinamax”. “The Hills Have Thighs”, “The Bare Wench Project” and “Cleavagefield” are just three of the 75+ movies he’s created that you’ve most likely seen but would never admit to anyone. The documentary “Popatopolis” is 25% insight into the man who’s created these movies and 75% instructional guide for those of you out there who might want to make their own “House on Hooter Hill”.

The movie begins with Wynorski waiting to interview an aspiring actress looking to land a role in one of his films. The fact that this meeting takes place in an empty parking lot gives you a good idea of the type of selection process Wynorski has for his movies. By his own admission he puts looks, specifically cup size, way above acting skill on his list of requirements. But that doesn’t mean that he doesn’t love what he’s doing. From a short tour of his home it becomes quickly obvious Wynorski is a big fan of film. His kitchen cabinets along with just about every other space imaginable are filled with books and movies.

The fact that Wynorski cares so much about his movies, and despite their low budgets still puts as much effort into them as he does is what makes up the meat of this documentary. When you see a movie like “The Witches Of Breastwick” on Cinamax at 3am on a Tuesday you’d probably not expect that there’s a director out there who made the actresses do take after take of each line to make sure it’s perfect, in his eyes at least.

And this is where the majority of the film takes place. In a large cabin in the middle of nowhere, California on the set of “The Witches Of Breastwick”. Wynorski has plotted out a back breaking three day shoot schedule with a hand full of actors and a bare bones crew that consists of a sound guy and a production assistant. All of the actors, minus porn star Stormy Daniels, have worked with the director on a number of different films before and pretty much know what to expect. No towels in their rooms, no food for the first day and most importantly a really cranky director with zero patience. Most of the cast and crew have a love/hate relationship with him that tends to lean towards the hate side. Yet somehow the movie gets made. There’s a lot of arguing and a lot of improvising, the highlight probably being a bonfire scene that takes place in a national park where no permits have been obtained and a large sign stating in no uncertain terms camp fires aren’t allowed.

If you can look past the ridiculousness of a majority of Jim Wynorski’s movies and appreciate them for the effort he puts into them then you’re going to find “Popatopolis” down right heartwarming. I’ll admit it is kind of hard to do that after seeing a group of people standing around waving flashlights at 3 women making out topless in a barn to simulate a blazing fire but you can’t argue with a guy who calls his mother every Sunday no matter what he has going on. And more importantly he almost never lets her watch his movies.