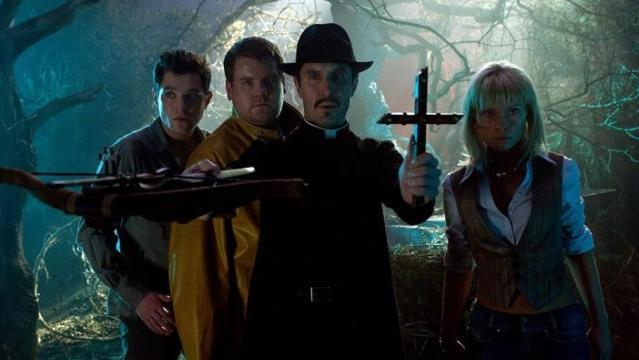 If and when you decide to properly investigate British filmmaker Phil Claydon's cheeky 2009 horror/comedy "Lesbian Vampire Killers," you may find it rather difficult to separate this extremely silly "best buddies" picture from the like-minded genre-bending classic, "Shaun of the Dead." I'm sure the comparison has been made countless times before by more talented, articulate critics, but, to be fair, it's really not that hard to uncover the mountain of similarities between them. Does this glaring sameness derail this otherwise enjoyable cinematic experience? Yes and no. Rewiring your brain may be required before viewing, especially if you are fond of ripping films apart for the sheer pleasure of it.

Normally I don't like to draw too many comparisons when reviewing a film, but "Lesbian Vampire Killers" probably wouldn't exist had it not been for the limitless imaginations of British funnymen Simon Pegg, Nick Frost, and Edgar Wright. There are more than a few elements from "Shaun of the Dead" operating within the very heart of Claydon's second full-length feature, in particular the dynamic between leads James Corden and Matthew Horne. Their friendship is almost identical in every way possible, right down to their individual characteristics. And while this quick-witted duo are certainly amusing, you can't help but feel as if you're watching a second-rate imitation of Pegg and Frost's shtick.

Even the basic premise is fairly congruent: Lovable loser Jimmy (Horne) is dumped by his back-stabbing, two-timing girlfriend, an event which sends our hero into a serious relationship-oriented funk. To forget his sorrows, our hero decides to hang out with his long-time friend Fletch (Corden) at their favorite neighborhood bar and discuss life, love, and the pursuit of happiness while masking the pain with booze. Before too long, the pair are smashed and plotting a vacation using a handy map and the pub's dart set. Their destination: the sleepy town of Cragwich, a village which exists smack dab in the middle of absolutely nowhere.

As soon as they set foot in this strangely monikered township, the duo encounters a sexy group of folklore students who are researching the ancient legend of Carmilla, a lesbian vampire who reigned many years ago. At the moment of her death, the blood-sucking siren cursed the town of Cragwich, making it so that every female would become -- you guessed it -- a lesbian member of the undead on their 18th birthday. Only a brave descendant of a forgotten bloodline can prevent her from returning to life. Thankfully, and coincidentally, Jimmy just so happens to be that guy, though he's more than a little reluctant to accept his destiny.

Claydon is a strong visual director, and there was never a point during the entire movie when I was gnawing feverishly on my toenails from boredom. In fact, the film was practically over before I knew it, so distracted was I by the spectacle of it all. And, for what it’s worth, James Corden and Matthew Horne do a fine job handling their respective roles with the correct amount of heart and soul. Problem is, things get a little too sophomoric at times; the Hammer Horror-inspired sets are practically littered with all sorts of bawdy jokes and lame innuendo, some more effective than others. When this puppy finally arrives Stateside, I wouldn’t be surprised if the film was fashioned into a "National Lampoon's" release.

“Lesbian Vampire Killers” offers up gore and giggles galore, packaged and stylishly polished by a director who certainly has a career ahead of him, assuming he plays his cards right. Fans of “Shaun of the Dead,” however, might be less forgiving of the film’s familiar nature, even if they are somewhat charmed by the delightfully moronic antics of its central characters. Comparisons aside, Claydon’s snazzy picture is occasionally funny, randomly amusing, frequently annoying, and, more importantly, just plain fun to watch. Sometimes that’s all you can really ask for.