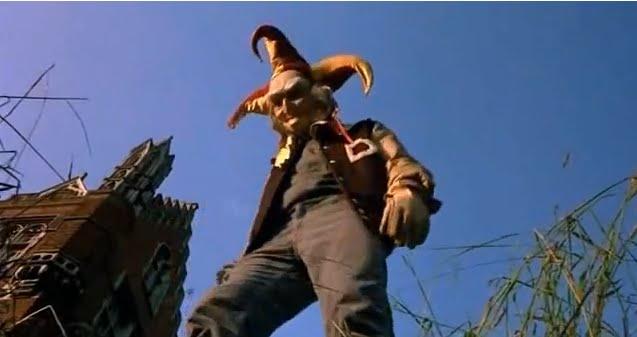 Sometimes reviewing a movie in a viewer advisory capacity sucks the fun right out of that film. This is especially true when one is given the task of registering an opinion on a film like “Slaughter High”. I have talked before about how my socialized adult brain limits my enjoyment of the things that my inner teen finds endlessly amusing. Most of the time this is okay because, while I smile at the idea of coughing out the word “Chode” when my boss is addressing the staff at an all agency meeting, actually putting that into practice would be an error that would cost me half a prostate when I returned home without a job. On the other hand when a movie “Slaughter High” offers up just about everything that my chubby little freshman heart could’ve wanted back in mid-80’s and my domineering adult won’t let me enjoy it, a forced perspective shift is probably in order.

“Slaughter High” tells the tale of a group of dick-head teens (all played by people encroaching on their third decade of life) who decide to prank Marty, the most harmless twit in their high school. The April Fool’s day joke involves leading the young geek to believe that he is going to score with super sexpot Caroline Munro ( “The Spy who Loved me”; “Maniac”) in the women’s shower. Charmingly Caroline and her shitheel friends secretly plan on video taping the naked nerd in order to amplify his humiliation. Of course, all does not go as planned. The second half of their sociopathic plot involving sabotaged lab equipment leaves Marty permanently disfigured and results in the school’s closing down shortly thereafter.

10 years on, the merciless pranksters arrive one by one (and virtually un-aged) at their former school for a reunion. They find no cause for suspicion when no one else shows up for the get together, instead they commence shagging, smoking, and reminiscing about simpler times when they nearly killed a boy for a lack of anything more exciting to do after school. Predictably this little soiree is a set-piece for Marty’s long plotted retribution. The asshole collective is thinned out one by one as Marty zeroes in on the girl who set him up.

The first thing that struck me about “Slaughter High” is how poorly the producers hide the fact that this was a British attempt to cash-in on the American slasher cycle of the 1980’s. Faked Yank accents, A gothic old monolithic boarding school, and narrow little country roads all tip us off to the fact that we are much closer to a game of Cricket breaking out than we are to seeing anyone score a touchdown. This is a grotesque miscalculation because had they simply let it be set in England it would’ve likely been a far more memorable film. Some wry wit could’ve compensated nicely for the places where the sheer campy zeal of the movie falls a little flat. This is the biggest problem with “Slaughter High”, overlong passages where we are waiting in vain for characters to amuse us. In a, 40 year old who has seen too many horror films sort of a way, this is fair criticism. But this complaint does ignore the fact that this is a little sleazer that features some salute-worthy kills, terrific unmotivated nudity and the finest knocker-rocking electrocution scene that my 40-going-on 14 year old brain has ever seen. So what if it’s occasionally boring and all about as shocking as finding out that blood pudding doesn’t generally taste any better than it sounds. Most of us have come to accept that old slashers are more fun than fright anyway.

On a less obvious front this film features one of the greatest creative turn arounds in practical SFX history. You probably don’t know this but John Humphreys is a make-up FX artist with over 30 years of experience. In 1986 he helped to render one of the worst looking monsters in modern cinematic history with “Rawhead Rex.” If you can imagine a more provincial retelling of “An American Werewolf in London” where the titular character is brought to life by using a motionless wax mask then you still can’t even approach how bad the “Rawhead Rex” creature looks. Humphreys’ next film was this one, “Slaughter High”, and I am happy to report that the FX range from gruesome to giddy fun. Way to turn it around JH!

If you aren’t impressed by gratuitous gore and needless nudity, then what the hell are you doing hanging out at a horror website? And what I mean by that is, “Slaughter High” won’t do a damn thing for you. If on the other hand you are the type of person who still occasionally stifles the imp of the perverse when someone bends over in front of you, then this film will likely tickle your fancy. The other case in which this film might work for you is if you, like me, just need to relegate your grown-up fuddy-duddy self to the corner while your hormonal teenager sits down and throws out a few “Fuck yeah” s as a muscle-headed idiot is cut in half by a riding mower.