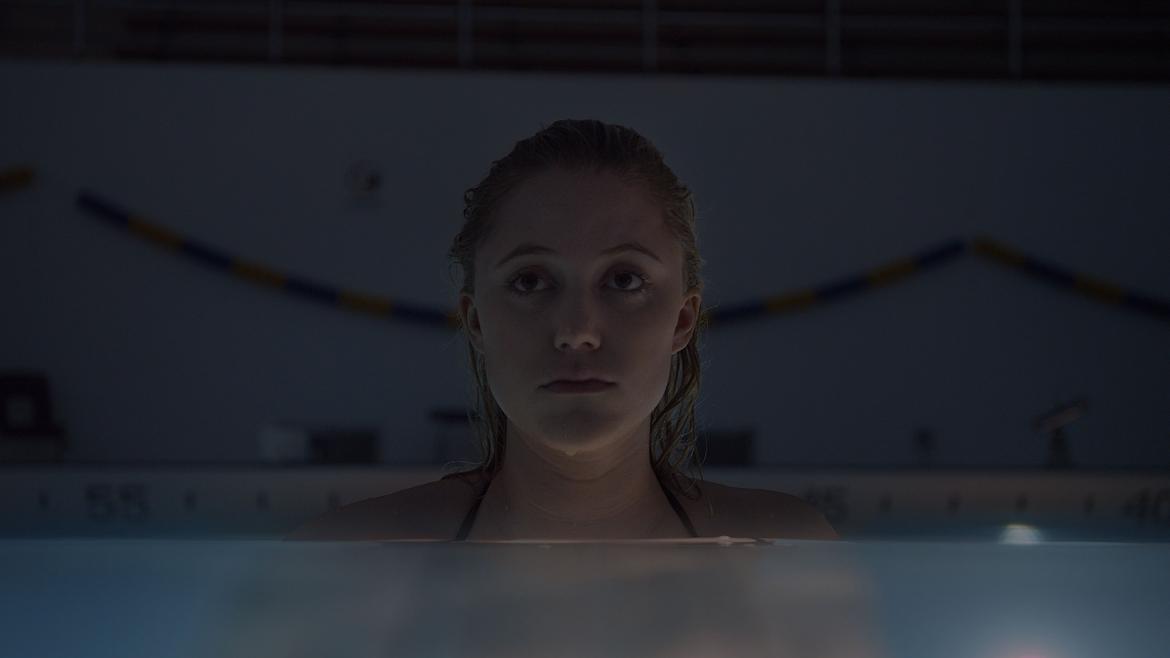 The premise behind It Follows is simple enough: something is following Jay, and it won’t stop. It’s summer in the suburbs of Detroit and the sense of inertia and stagnation is unmistakable. When we first see Jay (Maika Monroe, The Guest), she is floating on her back in the above-ground pool behind her house, staring up at the leaves; it is evident that this is a place where she spends a lot of her time. This is a place where she feels safe. But everything changes one night, after having sex with a guy she’s been seeing. Jay wakes up, confused and scared, handcuffed to a wheelchair in an abandoned building, but the scene does not proceed how you might expect. “This thing, it’s gonna follow you,” her date cryptically explains, “Somebody gave it to me, and I passed it to you.” He tells her that sometimes “it” looks like a stranger, and sometimes “it” looks like someone you know. Much like the killers in our favorite slasher films, “it” always walks, and “it” is always coming.

From this point forward, the remainder of the film is anything but static. Jay is constantly on the run as every place that was once comfortable becomes a possible staging ground for a chase as whatever “it” is relentlessly pursues Jay. It Follows deals with the mythos of the monster in a pretty effective way. The only option for escape seems to be to pass the curse on, which can only be achieved by sleeping with someone. However, if that person were to be killed the person who passed it would no longer be safe. This creates the motivation for Hugh to explain to Jay everything he knows about what will be happening to her. It is in his best interest to be sure she understands. After his initial expository speech, we are spared the typical research montages and are able to jump right into the story without having to ask many questions.

Despite a relatively transparent premise, It Follows mines each and every situation for the maximum level of panic and tension.  Writer and director David Robert Mitchell only has a few other, largely unknown, credits to his name before this film but you’d never guess it by watching.  Mitchell is very clearly a fan of film and of the horror genre, specifically; a fact that may be most readily evident by the music. Think the soundtrack for The Guest, then imagine it is all instrumental and much more foreboding. The film’s score, written and performed by Disasterpeace (otherwise known as Rich Vreeland) is heavy on the synth, leading many to draw comparison’s to John Carpenter. But even beyond the score itself, however, the sound design in general jacks up the anxiety factor quite a bit. Throughout the film there are instances of a rumbling bass sound which grows louder and louder, creating an almost physical response in the viewer, as though the sound were changing the pressure in the room.

The camera work is equally adept and works to great effect. There are long, sweeping takes that whirled through the action, harkening back to horror film of the late 70’s and early 80’s. The reeling serves to keep what is outside of the frame always in flux, building apprehension as figures come into frame and then be left behind by the camera. Mitchell also employs a deep focus technique for much of the still shots. This heightened definition of so much more area creates a deep sense of dread as eyes dart back and forth throughout the background, searching for some unseen threat. The very nature of the “it” plays very nicely into this camera work, as each and every person on screen becomes a possible entity. Which brings me to a final parallel with horror films of the 70’s and 80’s. Much like the killers in the classic slasher and zombie films, “it” doesn’t need speed to be terrifying. The fact that “it” moves slowly is completely nullified by the complete, almost robotic, determination.

The Detroit of It Follows is one that seems to be frozen in time. There is a lot of very intentional ambiguity about when this film is set. The costuming, set dressing, and even the cars all seem to possess a blend of now with a nostalgia for a time that has passed. The televisions are small black and white boxes with bunny ears. Perhaps most notably, for a film that focuses on a group of young people, we never see a cell phone or a computer. This arrested setting made this seem like a movie that could easily have been made thirty years ago. This film is a beautiful homage to where the genre has come from, and it's not alone. Other recent films like The Guest, House of the Devil, and the films of the Waniverse (The Conjuring, Annabelle, and the Insidious films) have mined the genre classics to tell new stories. This movie gives me hope and reminds me how far horror films and filmakers have come in recent years. It's a good time to be a horror fan!

The Seduction of Dr. Fugazzi