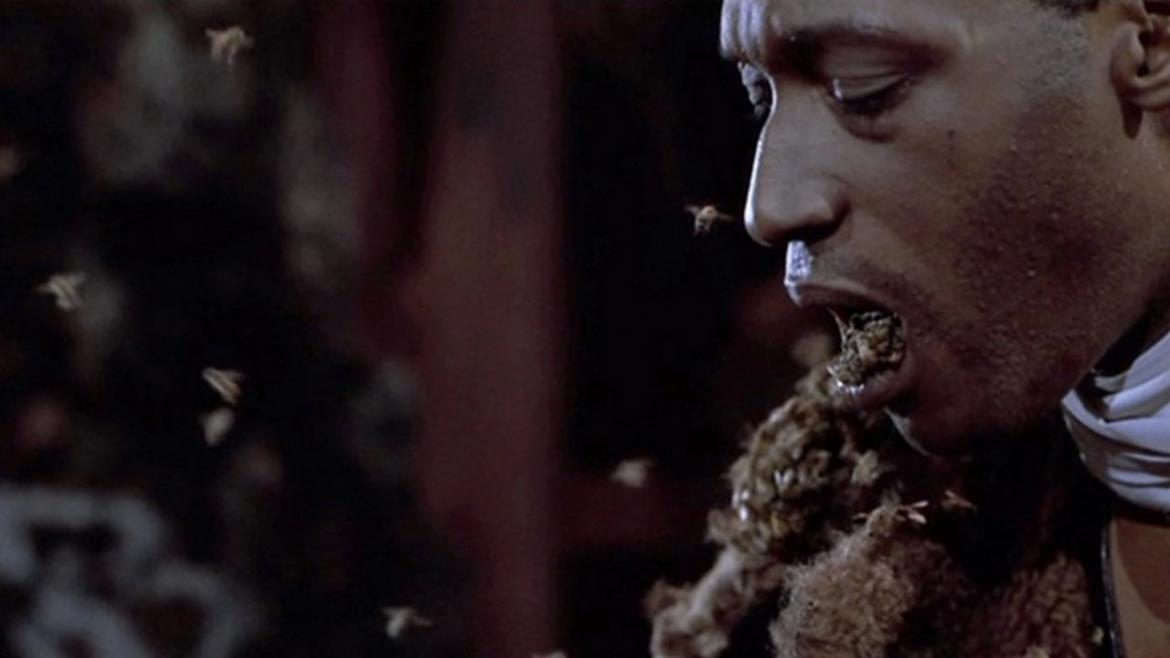 Most any town in any city has some sort of urban legend that haunts the dreams of it’s youthful inhabitants – and most urban legends are assumed to have some foundation in truth, somewhere along it’s origin. Maybe it’s the truth to the myth that is so fascinating, so intriguing, that gives such life to what was once a small campfire tale. Clive Barker’s Candyman, (based on his short story The Forbidden) perfectly illustrates that sometimes what we’re told as children to scare us into good behavior is a little more than just vernacular lore.

Studying urban lore and the truths behind them, Helen Rose (Virginia Madsen) finds herself investigating a local Chicago murderous legend, Candyman (Tony Todd). Candyman stalks the local housing project ruins and can be summoned by chanting his name five times in a mirror. Once a victim of a horrible crime, Candyman now seeks his revenge with his hooked hand. The further that Helen delves into the history of Candyman, the more intense her connection becomes to both the netherworld and the murderous legend himself.

Even at its release in 1992, Candyman was standout star in the slasher horror genre. Candyman was not only a classic, personally vengeful killer but also represented a group of people who had been wronged and forgotten. The emphasis on American classism is prevalent throughout the film and provides a narrative that divides our core beliefs. As the wealthy move into the city and push out the poor, the only thing left of them is a supernatural and lingering oral history – that eventually personifies itself into being and justice. Tony Todd is fantastic in his iconic role of Candyman. The man is a legend. Not only is he a large, imposing man who has a hook for a hand, but he is also a refined, distinguished man who speaks in quips rather than lumbering grunts and panting. Under the direction of Bernard Rose, Candyman is dark and gritty, pushing the underbelly of Chicago into the light of day and forcing us to take notice.

In present day, Candyman might seem to suffer from a lack of sparkly and vibrant gushes of blood or over the top violence, but the film still stands the test of time. If the plot that grounded all too soundly in reality isn’t enough for you, the bees in Tony Todd’s mouth were absolutely real. So just snack on that when deciding if you didn’t like it, and make sure you have your EpiPen on you.