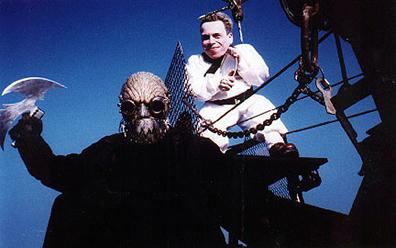 I'm used to taking a lot of flack for my taste in movies, especially when it comes to the horror genre. The films I tend to champion are often the ones that are despised or, in some cases, completely misunderstood by the masses, which often makes me come across as either snobby, stuck-up, or completely stupid. In most instances, I can make valid points as to why, exactly, I think the picture in question is the bee's knees, and thoroughly explain the reasons for my unpopular opinion. You may not agree with them, of course, but at least they exist.

However, when it comes to special effects guru and frequent Frank Henenlotter collaborator Gabe Bartalos' 2004 endeavor "Skinned Deep," my reasoning is null and void. Deep down in my rotten little heart, I'm painfully aware of the fact that the film is a complete disaster, from its hackneyed storyline to its cringe-inducing performances. Be that as it may, the picture strikes an unusual chord with me despite the fact that I know it's genuinely awful. It's a guilty pleasure of the lowest order, a sure-fire way for me to completely destroy any credibility I may have attained. Honestly, I'm a little ashamed.

At its core, "Skinned Deep" is just your average, everyday "Texas Chainsaw Massacre" knock-off complete with shrieking victims, one truly demented family, and a prerequisite dinner sequence involving buckets of blood and bushels of screams. More specifically, the film chronicles the murderous adventures of a family of psychopaths whose sole purpose in this world is to savagely butcher any tourists who stumble across their little slice of the American dream. However, when the family's wishy-washy son Brain (yes, that's BRAIN) falls for one of his pretty little victims, their world slowly begins to fall apart.

Say what you will about the film as a whole, but there's definitely one aspect where "Skinned Deep" truly excels: atmosphere. The sets are meticulously detailed, every inch saturated with random bric-a-brac and thousands upon thousands of Christmas lights. This above all else is what keeps me coming back for repeat viewings; there's literally too much visual stimuli for your brain to process, and a lot of the smaller details go unnoticed during the first few screenings. The level of weirdness is through the roof, though this actually works in the picture's favor.

"Skinned Deep" also sports an impressive collection of bizarre character designs, including the lovably deformed Brain, a dwarf with an unhealthy obsession with plates (played with reckless abandon by Warwick Davis), and the impossibly creepy Surgeon General, a strong, silent killing machine with a metallic jaw and impeccable style. They all fit snugly into the bizarre universe Bartalos has crafted, though you can’t help but feel that these inherently kooky villains would have been better suited to film with loftier ambitions. The Surgeon General is such a cool character that it seems like a waste not to have an entire franchise structured around him.

I know what you’re thinking, and, no, I haven’t lost my mind or consumed a large quantity of hallucinogenic drugs. There’s simply no grey area with “Skinned Deep” -- either you love it or you hate it. I, for one, adore the movie, and am quick to recommend it to those with like-minded sensibilities. Those of you who can overlook Bartalos’ shaky direction, the plethora of crumby performances, and outrageously stupid script will be presented with a strangely Lynchian gorefest that doesn’t going one toke over the line. It’s a demented gift from the twisted B-Movie Gods, and proudly sits in my extensive collection of cinematic trash. Feel free to point and laugh; I'm used to it by now.
У нас вы можете купить диплом вуза о высшем образовании недорого.