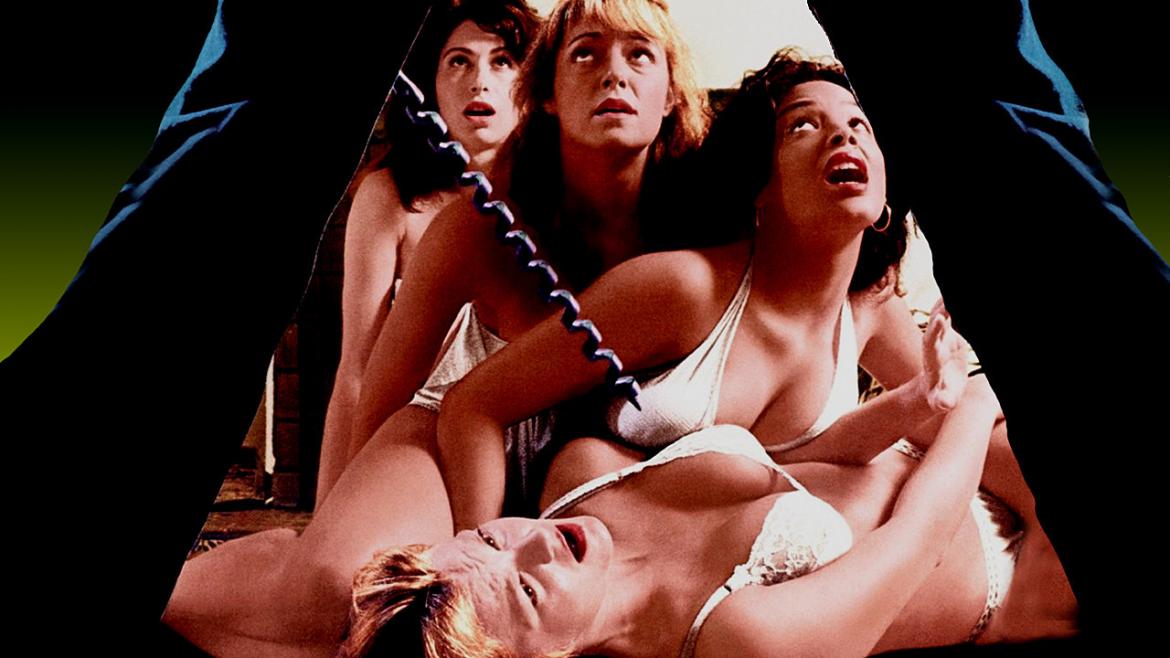 In many ways, the story behind The Slumber Party Massacre is more interesting that what ended up on screen. The script was originally written as a parody of the slasher genre by Rita Mae Brown, a prominent feminist and lesbian writer, who today is best known for writing a series of novels where a woman solves mysteries with the help of her cat. Producer Roger Corman decided to film the script as a straight-forward horror movie. As director, he hired first-timer Amy Holden Jones, an editor and writer who went on to mainstream success in the 90s by writing “Indecent Proposal” and “Beethoven”. To take the job, Holden turned down the opportunity to edit “E.T.”

The film retains only a wisp of the parody it was written as; for the most part it plays out like any other “Halloween” knock-off of the early 80s. A girls’ basketball team is having a sleepover, a homicidal manic has escaped from prison, and jump scare cats litter every closet and dark path, ready to leap when the ominous music swells. The paint-by-numbers structure of the slasher movie doesn’t entirely eliminate all of the subversive elements, though. There’s a running theme of voyeurism and the male (and sometimes female) gaze that is played out both by the camera and by the characters. During the requisite shower scene, the camera pans up and down the naked bodies of the girls, lingering just a bit too long on the t and a in a way that is so deliberate that it draws attention to the fact that providing nude female flesh to leer at is just another box to check for this type of movie.  The voyeurism theme continues with boys watching through a window as the girls casually change into their pajamas, a few female characters flipping through a Playgirl and ogling naked men, and of course, the killer, lurking in the background in a van, watching the characters and waiting for his moment.

The most obvious element of parody that made it into the film comes from the killer’s weapon of choice: a foot-long drill which he tends to hold near his crotch, just in case anyone was having trouble picking up on the metaphor. The killer, who has the phallic-tastic name Russ Thorn, never sexually assaults any of his victims but the one time he speaks in the movie he sounds like a rapist straight from a Lifetime movie, “You know you want it. You love it”. At the end he is symbolically castrated when the final girl swings a knife and chops off his drill bit.

When it was released, it’s likely that most of the subversive parts of Slumber Party Massacre flew right over the heads of its intended audience. They came to the movie expecting boobs and blood and they got both, in copious amounts. Slumber Party Massacre is reasonably entertaining, but it’s no forgotten classic. It’s so genre-bound that most of the movie plays as nothing more than a textbook example of the first wave of the slasher boom. Where it gets interesting is the fact that it’s an example of a female creative team working within the framework of a style that was (and for the most part, still is) made almost exclusively by and for men. While it’s not quite the feminist parody it could have been, The Slumber Party Massacre comes from a unique enough place to make it one of the most notable slasher movies of its time.