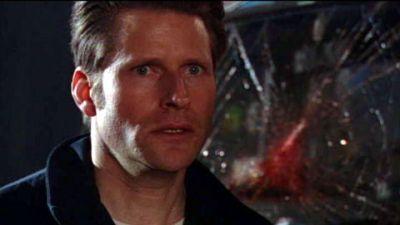 Will the day ever come when genre-related filmmakers grow weary of making films which feature a gaggle of generic teenagers being stalked through a nondescript forest by a deranged killer with a penchant for unchecked brutality? I seriously doubt it. The only thing any of us can hope for is that this tired, well-worn formula is approached by someone with the ability to put a fresh, creative spin on things in order to make us forget we're watching the exact same movie we tackled the week before. Except, of course, with different actors, a different villain, and, perhaps, a different collection of trees and shrubbery, though the change in foliage is completely optional.

Looking to throw his hat into the proverbial ring is “Harry and the Hendersons” director William Dear, a man one generally doesn't associate with blood, guts, and hillbilly mayhem. In addition to helming the aforementioned family-friendly sasquatch picture, Dear is responsible for penning Joe Johnston’s “The Rocketeer,” as well as directing both “Angels in the Outfield” and the obscure 1991 secret agent yarn “If Looks Could Kill.” And while all of these films are fine and dandy in their own right, the idea of Dear spearheading a grisly, grue-soaked horror picture seems quite odd. Maybe that’s just me.

I know, I know -- I shouldn't pigeonhole anyone, especially someone with a filmography as diverse as Dear's, but it's easy to see why people might have their reservations about his latest endeavor, the 2006 survival horror flick “Simon Says,” which finally arrives on DVD this month courtesy of Lionsgate. After all, can a man who, for the most part, specializes in harmless kid-oriented fare craft a motion picture that has the capacity to frighten jaded horror devotees and a generation of savvy, desensitized teenagers?

The answer is complicated. Dear’s film is painfully unoriginal, cut from the same cinematic cloth as every backwoods horror flick ever produced since the beginning of mankind. It contains scenes and situations and characters we’ve seen a thousand times before, in particular the quintessential creepy gas station sequence, an increasingly frequent cliché that is starting to gyrate rudely upon my last nerve. To Dear’s credit, I watch an ungodly amount of movies, almost to the point of cranial overload. Casual film fans probably won’t notice the similarities, so this isn’t so much an issue as it is an annoying pet peeve.

Dear’s ace in the hole, of course, is Crispin Glover, an actor I love to watch regardless of how awful the picture may be. His role in “Simon Says” is certainly no stretch, as Glover has tackled the “unsettling weirdo” character more than a few times in the past. Here he’s suitably uncomfortable and unnerving without going completely spastic and over-the-top, a problem which plagued Jeremy Kasten’s “Wizard of Gore” remake. The second half of the feature is where he really gets a chance to shine, especially once a certain secret is revealed.

Unabashed Glover worship aside, the film is surprisingly solid. Dear’s direction is spot-on, and his sharply-written screenplay keeps the momentum breezy and the buckets of blood flowing. The rest of the cast -- an unholy collection of rising television stars and pretty faces -- aren’t exactly award winners, nor will they ever be. The majority of them do, however, die in a number of inventive ways, so their acting abilities aren’t really that important in the grand scheme of things. What can I say -- sometimes I’m a knobby little hypocrite with a hankering for wanton dismemberment.

Despite my initial apprehension, I'm happy to report that William Dear has delivered a gleefully gory slasher packed with inventive deaths and a totally warped performance from professional creepazoid Crispin Glover. Yes, it’s rooted firmly in familiar territory and, yes, you’ll probably want to personally decapitate the film’s supposed “heroes” roughly fifteen seconds it, but it’s all in good fun. The depth of your enjoyment, I’m afraid, will be calculated by how many times you’ve seen this sort of scenario play out on your television set and your threshold for cinematic regurgitation. It's swill, but at least it's entertaining swill.