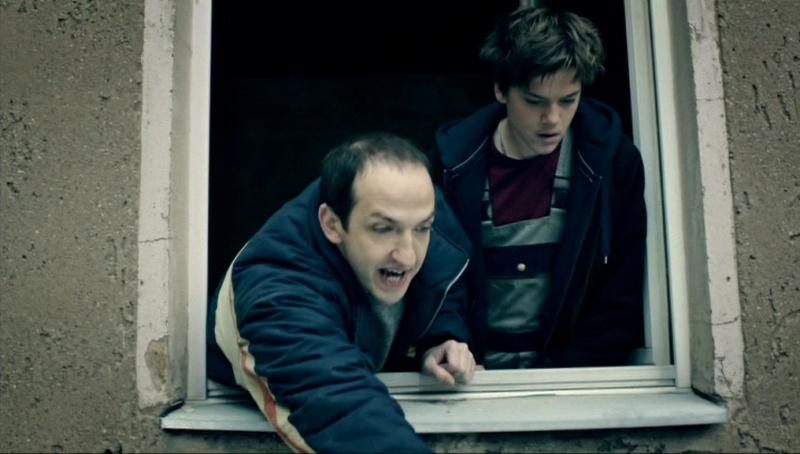 What makes a good zombie flick? The cynic in me wants to say “George Romero and various Italians, 25 years ago” but that’s a cop-out that ignores the fact that some good, even great, zombie movies have been made in recent years (just not by Romero –Boom, roasted!). No, the secret of a good zombie movie is that the movie is about the people, not the zombies. Look at the best of the modern crop – “Shaun of the Dead”, “28 Days/Weeks Later”, “Pontypool”. What they all have in common is strong, interesting characters who happen to be caught in a zombie apocalypse. Zombies are the ultimate MacGuffin, a peripheral, outside threat that drives the story along but ultimately aren’t the focus of the film. “Siege of the Dead” is a great example of a movie that realizes that its story comes from the characters, not from the zombies.

“Siege of the Dead” (which has the less cash-in-tastic name “Rammbock” or “Battering Ram” in its native Germany) follows a lovelorn sadsack named Michael who decides to travel to Berlin in order to drop in unexpectedly on his ex-girlfriend Gabi to return a set of keys in person. When he arrives, he finds her apartment occupied only by a handyman making repairs to her radiator. A handyman who is suspiciously non-verbal and given to occasional strange spasms. The handyman’s apprentice, a teenager named Harper, is a little more vocal and he explains that Gabi stepped out moments earlier. Before Michael can get in touch with Gabi, the handyman goes into full-on zombie mode and attacks the two of them.

Michael and Harper find themselves bottled into Gabi’s apartment, where they can see people getting eviscerated by other zombies in the courtyard below. They can’t escape but they can communicate with the neighbors who are similarly trapped in their apartments across the way. Like some kind of German MacGuyver, Michael begins scavenging materials to build contraptions in an attempt to find Gabi and get out of the city before it’s too late.

This film sets itself apart from the masses with its unique take on the zombie rules. First of all, for the zombie pedants out there, these aren’t living dead zombies so much as “28…later”-style “infected”. The virus is transmitted through bodily fluids (i.e. a bite) and is activated by adrenaline and excitement. That means that the longer you can keep your cool after being bitten, the slower your transformation. Sedatives are your friends. This also means that when zombies get bored, they become fairly docile so if you keep your voice down and don’t call too much attention to yourself you might not attract the horde. Zombies don’t tend to carry as much mythology as their horror brethren so it is nice to see a little development to the genre that goes a little deeper than “don’t get bit”.

Michael’s quest to find Gabi also works in the film’s favor by giving him a driving force and then stripping it away when he finds that Gabi is alive, but she doesn’t want to get back together. First the zombie apocalypse and now this? The relationship subplot might be a little too reminiscent of “Shaun of the Dead” for some, but it’s played with real emotion and it’s hard to not feel for the guy when he climbs out on the roof of the building alone and realizes that his internal and external worlds have both gone to hell.

The film’s running time is something that some people might grumble about. Clocking in at just a hair over one hour, the film lives in that no man’s land between short and feature. Personally, I don’t mind. The movie moved along at a clip, told a full story and never overstayed its welcome. Conventional wisdom would probably tell the filmmakers to tack an extra twenty minutes on to get it to a respectable length. Honestly, though, the film didn’t need twenty more minutes and that extra time would probably only drag the film down. Commercially, an hour-long film is probably a terrible idea, but from an artistic standpoint it doesn’t bother me at all.

Speaking as someone who greets each new zombie film with all the excitement of a 9-year-old facing down a plate of Brussels sprouts, “Siege of the Dead” is a hell of a good time. It’s well-paced, has interesting characters and keeps the focus firmly on the humans instead of trying to impress us with that same shot of zombies munching on people that we’ve seen a million times since 1978. The first wave of modern zombie films was revitalized by European directors. Maybe between this, “Dead Snow” and “REC” we’re seeing the beginning of new wave of Euro-zombie flicks that will prove there’s still a little life out there after all.

Shaun of the Dead