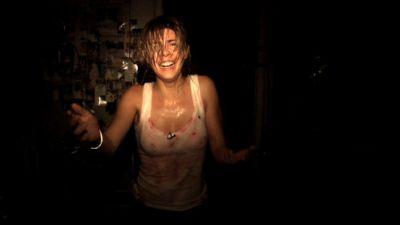 “[Rec]” has a fairly ingenious hook- the early stages of a zombie outbreak filmed in the suddenly hot found footage style of “The Blair Witch Project” that was recently reanimated by “Cloverfield”. The only problem with this ingenious hook is that “[Rec]” is the third film in two years to follow the same premise. It might have a hard time shaking the association with “The Zombie Diaries” and “Diary of the Dead” but “[Rec]” justifies its existence by using its chosen format well and having a handful of undeniably scary moments.

The film is meant to be the raw footage shot by a TV crew covering firemen on the graveyard shift. A routine rescue call to an apartment building results in some neck-chomping, and when the survivors attempt to leave they find that the entire building has been placed under quarantine and the military has cordoned off the building to prevent the spread of the zombie plague. This leaves the would-be rescuers, apartment residents and TV crew forced to fend for themselves against an ever-growing legion of new school “fast” zombies. The plot could come directly from a survival horror video game and in a strange way “[Rec]” is more reminiscent of watching someone play a really scary first-person shooter game than it is of watching a conventional narrative movie.

In typical video game cutscene fashion, the survivors are less characters than character types. In addition to the TV crew and the rescue workers there's Sick Kid, Sick Kid's Mom, Chinese Family, Gay Man, Doctor and a few others and all behave according to their one distinguishing characteristic. Then again, characters don't matter as much in a POV movie because the viewer is inserted into the movie and experiences it almost as one of the characters. Anyone who's ever been spooked in the dark knows the dread of walking down a unlit hallway guided only by the beam of a flashlight. In this film the dread is magnified because sometimes things sometimes actually do jump out of the dark.

For most of its brisk running time the film dutifully hits all the zombie film tropes and could almost pass for a one-shot side story from the “28... Later” universe. In the last fifteen minutes, though, we get a shift in location and a bit of fascinating yet underdeveloped backstory and “[Rec]” really begins to distinguish itself from the eleventy billion other zombie films that have come out in recent years. The sequel currently rumored to be in development would do well to explore the origins of the zombie outbreak that are only hinted at in the film. We don't get much time to muse over the implications, however, because the end sequences come quickly and fiercely and are pants-wettingly frightening. It can be expected that some people will be sleeping with the lights on for a while after seeing this.

The success or failure of “[Rec]” depends wholly on how you look at it. As a typical narrative film it doesn't rate at all. A group of fairly generic people are trapped inside a building with monsters who periodically pop up, shout “Boo!” and try to eat them. That's it. If you drop the expectations of plot, character and story-telling and just look at it as a scare-delivery machine, though, the film excels. The jump-scares will make you jump and the tension builds throughout. When you sit down for “[Rec]” just imagine you're being strapped in the car for a carnival haunted house, switch off your expectations and enjoy the ride.