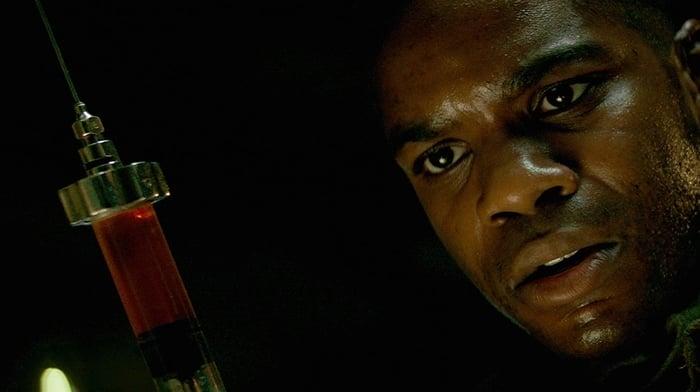 Once rumored to be a Cloverfield-iverse entity set on the eve of D-Day, Overlord has been the focus of much speculation prior to the emergence of trailers and assertions by the filmmakers of its true origins and tie-ins (or lack thereof). All the better too, because as a straightforward revisionist WWII thriller utilizing a wicked supernatural twist Overlord flat out rocks and maximizes its impact to great effect without shouldering the burden of wonky Cloverfield retconning.

Not everything we once heard about the film is incorrect though. The narrative is set on the eve of D-Day as a group of soldiers drop in to France with a mission to take down a radio signal jammer nestled in a church compound which needs to be dealt with so ground troops have adequate air support. However, their mission proves to be much more difficult than expected when it is discovered that the Nazi soldiers guarding the post and the mad doctor within its walls have been conducting experiments on the residents with the purpose of changing the stakes of the war in horrifying ways.

Some may be expecting Overlord to be a supernatural flick that just so happens to be set during WWII when in fact the film is much more of a WWII thriller that skews its history even further with its supernatural twist at about the halfway mark. Regardless, Julius Avery's sophomore feature is worth the price of admission for the opening sequence alone. It may not have the artful epic scope of Spielberg's beach storming scene in Saving Private Ryan, but the visceral intensity and pure sonic chaos provides the movie a thrilling roller coaster type introduction that asserts itself handily to the audience.

As is the case for most major releases the pacing lets up a bit with a few moments of action sprinkled throughout, but the tension never quite lets up, even in the face of some welcome comic relief. The middle act's essential purpose is to flesh out the cadre of commandos and to introduce the supernatural twist that becomes the key final battle. The characters are types, no doubt, yet a reasonable amount of depth is at least attempted for what essentially becomes a splatterfest. It's commendable to broaden the scope of characters in a genre movie of this nature, giving the audience much more of a rooting interest in their arcs during the chaotic finale.

Speaking of the finale, the intensity of the closing act doesn't fully reach the level of the opening sequence but satisfies on its own terms, delivering much more of the Wolfenstein-esque thrills promised by the trailer. Claustrophobic corridor chases, shootouts, flamethrowers, and a boss battle cap off the kitchen sink insanity while also giving the character arcs a chance to hit their somewhat cliched sweet spot.

Overlord sometimes bites off a bit more than it can chew given its historical setting, but its rollercoaster thrills provide a decidedly unique and engaging spin on its time period. Come for the butt clenching insanity of the opening plane sequence, stay for the sci-fi horror splatterfest and cheekless Nazi boss level battle.