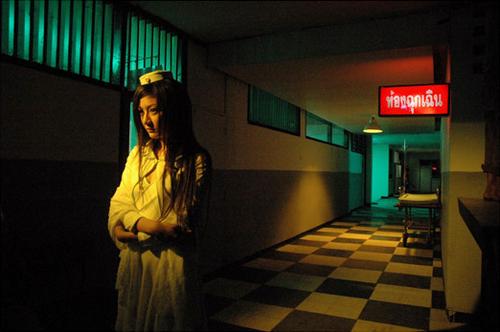 You take seven hot Thai nurses, put them in an oddly deserted hospital where a girl-on-girl lingerie tickle-fight seems more likely to break out than the Norovirus, add in an incomprehensible plot involving body harvesting, vengeful ghosts, and a male-to-female transsexual and what do you have? A surprisingly decent little Asian exploitation film, it turns out.

Man-whore Dr. Tar has a harem of sexy nurses and a surefire money-making scheme.

Step 2: Pack with dry ice in trunk of car

The plan would be fool-proof, but his latest victim is one of his lovely assistants, a jealous nurse who gets out of control and is killed by the other nurses. Due to some sort of never explained mumbo-jumbo, after seven days the dead nurse comes back for revenge as an all-black hair ghost. In a fairly clever twist, the majority of the movie takes place over the course of ten minutes, showing each nurse encountering the ghost before rewinding to follow another nurse.

The film is padded out with numerous flashbacks and cuts to Dr. Tar, who is receiving the “Doctor of the Year” award. The story, quite frankly, is ridonkulous and the ever-shifting timeline leaves the viewer with only a vague idea of what is going on for most of the film's running time. None of that matters much, though, because “Sick Nurses” is one of the most fun horror films to come out of Asia in some time.

The key is that the film never takes itself too seriously. It revels in its silliness without ever descending into camp. This is a film where victims are brutally attacked with nontraditional weapons like a toothbrush, a handbag, and a pickled fetus. One of the stranger deaths even features a character being killed by the number four. The hair-ghost in this film isn't the somber, blank-eyed ghoul that has become a cliché in recent years. She kills with a mischievousness and joy worthy of Freddy Krueger himself.

The look of the film also deserves kudos. Many sequences go beyond the standard look of Asian horror by lighting scenes in the garish colors usually associated with Mario Bava and Dario Argento. The filmmakers also stretch their clearly meager budget with some smart and stylish trick photography, with things happening in the back of the frame or just before a cut that leaves the viewer wondering if they really saw what they think they just saw.

It should be noted that due to Thailand's strict censorship laws the film is denied the extra layer of sleaze viewers might expect from a film prominently featuring lesbian twins. Each nurse invariably finds some reason to strip down to her underwear, but that's as far as it goes. One character even bizarrely showers fully clothed. Even with the toned-down sexploitation factor and the relative incoherence of the plot, “Sick Nurses” should connect with an audience looking for a fun and original Asian horror movie.