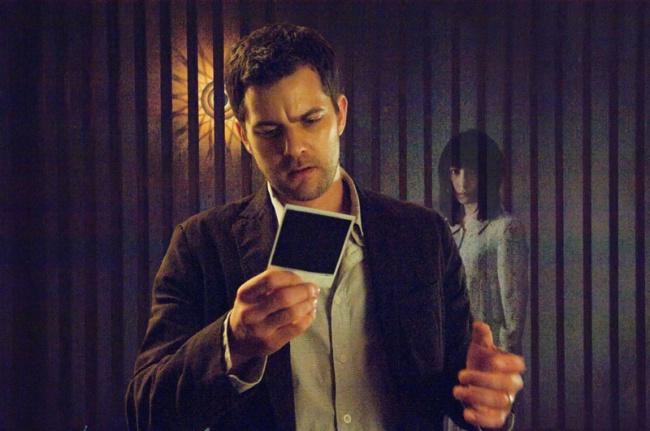 "Shutter", at least the American version of the Thai original, is hopefully the last of a dying breed; ie, a nuetered remake of a foreign horror film that had the potential to be so much more. That said, it could be a lot worse.

The story follows a newlywed couple Ben and Jane (played by Joshua Jackson and Rachel Taylor respectively), who move immediately after their wedding to Japan. It turns out that Ben is a photographer, and has landed a job in Japan due to some old friends who he used to work with there. Jane, a young bride fully in love, agrees to drop everything in her life and move across the world with her new husband.

While driving to their honeymoon cabin, the couple crashes their car when Jane sees a ghostly woman standing in the middle of the road. After hitting a roadside tree, the couple pass out and when they awake, Jane is very distraught over the possible death her accident may have caused.

Once the honeymoon is over, the couple move in to their studio apartment adjacent to the photo studio where Ben will be doing most of his work. They receive a package of photos taken at their wedding and both quickly notice strange ghostly images appearing in the pictures. As the images in the photos become more ghastly, and the encounters become more frightening, Jane finally coaxes Ben into helping her unravel the mystery.

Sound familiar? It should, because this is the kind of territory that Asian filmmakers seem to be obsessed with covering. There certainly are cultural reasons for this phenomena, but what we're mainly here to discuss is this remake. A direct comparison must be made to Lions Gates own A-Horror remake of late, "The Eye". Both are PG-13 horror films, both star young people, and both feature vindictive ghosts with ulterior motives. Placed subjectively up against one another, "Shutter" is by far the superior film. That's not to say however, that it manages to be anything other than mediocre.

One noticeable difference is the acting. Despite the obvious problem of recognition and being typecast, Jackson is very solid in his role. I enjoyed that Ben was a layered character with darker corners to his personality. Rachael Taylor goes beyond being just eye Candy like Alba was in "The Eye" (although quite gorgeous in her own right) and accurately conveys pretty much everything she was called upon to. There is even a fair bit of sexual tension between the two, which helps sell the whole thing that much more.

Story wise, there is one major difference between "Shutter" and most of it's A-Horror brethren, and that is that most of those films deal with innocents. It's usually about a person who stumbles upon a situation that they don't understand, and just by being there, are afflicted with a ghostly curse. In this story though, as the layers begin to be peeled back, it becomes obvious that there is a very intense and personal reason that this woman is haunting this young couple. The basic supernatural theme in the story, ie the binding of spirit to flesh when a traumatic emotional event occurs, was an interesting layer to the typical ghost yarn that I enjoyed.

There is a fatal flaw with "Shutter" though, and it really has nothing to do with either the writing or the acting. My main problem with "Shutter" is that it gives every appearance of a film made by someone who desired to make a scary "R" rated picture, but was instead forced to blunt the picture's impact at every corner. For a PG-13 movie, there are several sexual situations that begin to push the boundary of the rating. There is also slight amounts of gore and blood, and even an F-bomb thrown in for good measure. Whereas "The Eye" seemed quite content in being scrubbed of all it's impact, accomplished horror director Masayuki Ochiai really tried his best to make the picture scary while staying within the obvious restraints put on him by the studio.

The results, of course, are predictable. There are maybe one or two moments in the film that are shock inducing - which is one or two more than I counted in "The Eye" - but it still at the end of the day ends up feeling like a neutered picture. Which ultimately is pretty disappointing, because unlike most of these remakes, there was real potential for something above average here.

If Hollywood wants to do something really radical, why not get one of these directors to remake an Asian film for American audiences and *gasp*, actually give said director creative control to take it as deep and dark as he wants. These PG-13 Asian remakes are going to die out sooner or later, and the studios are going to have no one to blame but themselves. Because at the end of the day, you can imitate another country's cinema all you want, but unless you keep the heart and the balls, you're just going to end up with a corpse... which is exactly what "Shutter" feels like.