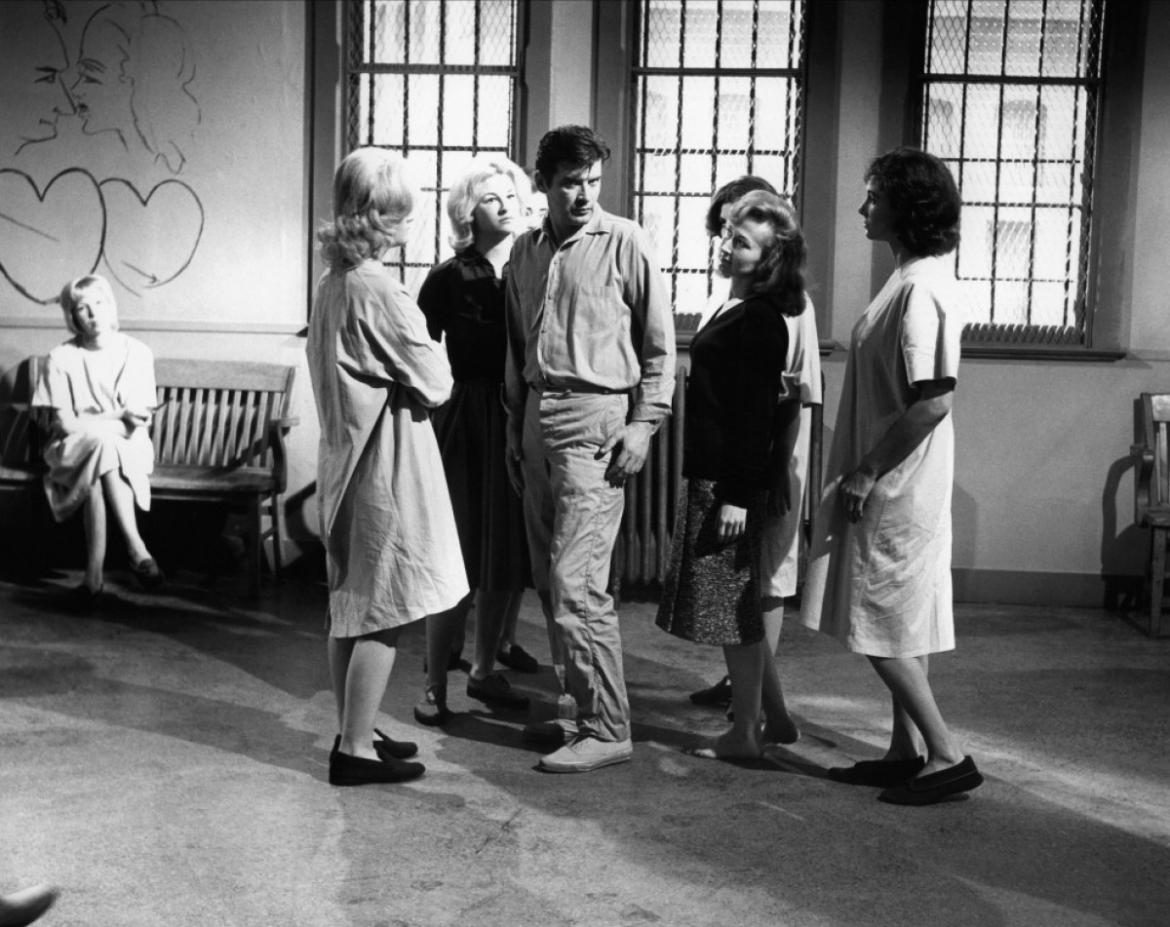 Samuel Fuller’s films have been embraced for their frank presentation, personality, and pointed political aspirations. Often working in lower budget, near exploitative circles, Fuller churned out films that were provocative, campy, occasionally hilarious, and starkly framed, both in subject matter and his usual attention to violence. He was a filmmaker capable of crafting cinema that went on to attain critical appreciation while also appealing to audiences interested in the inherently lurid.

Perhaps no other film in his oeuvre contains these qualities more completely than in 1964’s Shock Corridor. Directed, written, and co-produced by Fuller, Shock Corridor unveils a filmmaking mind that was politically conscious, restless, ambitious, and with more than a decent layer of black humor and irony.

Johnny Barrett (Peter Breck) is a criminal reporter with high aspirations: the Pulitzer Prize. Following the murder of an inmate in an asylum Johnny enlists the help of his boss’s psychoanalyst friend to help him feign insanity. Together they construct an elaborate ruse with the help of his girlfriend Cathy (Constance Towers) who postures as Johnny’s sister whom he reports to have potentially raped. Successfully convincing a court psychologist, Johnny is admitted into the asylum for observation and treatment for his phony “Fetishist” tendencies. Once inside, Johnny questions three inmates who witnessed the murder—Stuart, Trent, and Boden—while battling for his own sanity and anguishing over Cathy and her fidelity.

With pop-psychology drifting in the social ether at the time of the film’s production it is unsurprising that Shock Corridor was produced. The subject matter was ripe pickings, fuel for the exploitative B Movie fire. And the film’s approach to mental illness is certainly antiquated and ham-fisted. Many of the breakdowns exhibited are childish ranting that go unexplored or played for a joke, eventually devolving into throwing pitchers of water or food. In particular the film’s perception of female psychosis and sexuality is troublesome, seeing its female characters as clingy, succubus vamps or just needing a good lay.

None of this may be all that surprising given nearly seventy years worth of insight looking back. But it is also apparent that the more tawdry elements in Shock Corridor are mostly window dressing to Fuller. The murder in question and Johnny’s pursuit of the Pulitzer are little more than red-herrings that get him into the asylum. Indeed, outside of the film’s typical noir-tinged suspense thriller trappings there exists richer thematic material Fuller draws out through each of the three inmates and Johnny. Stuart, a former Korean POW who was brainwashed in attempts to make him communist, believes himself to be a Confederate Civil War officer. Trent, who now believes himself to be a high profile KKK member, is a young black man suffering from the trauma of racism he experienced after being the first African American admitted to a southern university. Lastly Boden was a scientist working on atomic weapons who now has reverted back to his six-year-old self. In each respective character we see shadows of the Civil Rights movement, Cold War era paranoia, and male anxieties over the sexual revolution.

Rather than focusing specifically on the mystery elements Fuller frames these characters as distillations for these particular socio-political issues percolating in the U.S. Trent exhibits intense self-loathing brought upon him by a society that refuses to accept racial equality. Boden as resident rocket-scientist is made humble, feeble, and insecure by the weapons of war he was instrumental in creating; the logical reasoning of the science clouded by the horrors of military application. Stuart’s arc is perhaps the most reactionary in that it plays into anticommunist propaganda. But it is also an inspired decision to have his character revert back to a period of US military history immortalized as a conflict that was “truly” founded in morality. By grounding Stuart’s delusional personality as a Confederate officer Fuller is drawing out a correlation between Stuart’s real experience in Korea and the war of ideologies that underlined the Cold War ethos. Rather than crusading for the abolition of slavery or genocide the “purpose” behind Stuart’s war is a matter of conflicting economic principles that cannot be fought with traditional weapons.

If we are to see the delusions of the three male witnesses as distillations of national psychosis than Johnny’s eventual breakdown may be regarded as the result of the rising tide of feminism and the sexual revolution. During dream sequences we see a full shot of a Cathy in her stripper routine outfit superimposed over Johnny’s face. She states that she doesn’t know if she is able to love a man who is so “Jekyll and Hyde.” Next she tells Johnny that she has the right to find another. A proposition that causes Johnny to bolt awake screaming, “No!” Later in the film, while searching for clues, Johnny inadvertently stumbles into a room full of scantily clad ladies in medical robes. The camera cuts back to Johnny as we hear his thoughts in voice-over, “Nymphos!” Suddenly the women descend upon Johnny, ripping his clothes as he screams. The film seems to imply that Johnny’s descent into madness—signified at times by him losing his voice—is made more pronounced by his inability to control his girlfriend and the rampant sexuality of the only other women present in the film.

However, Fuller undermines any easy interpretation of this by complicating how Cathy is framed for the audience. During a sequence early in the film we watch as Cathy performs a strip tease to a down-tempo love ballad. The camera is motionless as in long-shot we see Cathy vigorously dancing while promising undying devotion. When off stage Cathy is portrayed as a worrisome lover who is frightened of Johnny’s unchecked ambition. It’s an interesting dissidence that makes apparent the impossible role she is to embody both as a character and an idea for Johnny. Cathy is objectified and lauded in both the film for the audience as well as in Johnny’s mind.

The conclusion of Shock Corridor proves to be Fuller’s most pointed critique. Rather than leaving the audience with a concrete conclusion Fuller insinuates a cyclical nature of a system that does not seek to repair but to treat the symptoms of its population. The system works but only to a point; being incapable of coping with the collective social psychosis it breeds. When the murderer is eventually revealed, Johnny’s warnings go unheeded, reduced to mere ramblings reminiscent of the other inmates. “Justice” in Shock Corridor is ephemeral at best.