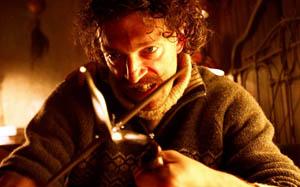 The setup of "Sheitan" is standard. A group of young club goers, with little on their mind but sex and heavy drinking, get kicked out of a bar on Christmas Eve. They meet up with Eve, a mysterious woman who invites them back to her home in the country to continue the party. They drive what seems to be all night and meet Eve's housekeeper, on the road to her home, a smarmy farmer played brilliantly by Vincent Cassel (“Irreversible”). Events become hilariously odd as Joseph's playful bantering becomes ever more uncomfortable and boundaries are crossed.

The clubbers quickly begin to notice that Eve and her family are not right, when Joseph milks a goat into Eve's open mouth from a close distance. Joseph is a dollmaker and tries to match-make Bart, the lead clubber, with his promiscuous daughter to no avail, because Bart is more interested in Eve. When that fails, Joseph makes an unsolicited pass at Bart and then plays it off as a joke, making Bart look like an asshole for not playing along.

The plot becomes progressively creepier as they all retire to the home, which resembles a set that David Lynch would feel comfortable using: black and white tiled floors, narrow hallways, and a creepy doll workshop. Joseph loses his smile at dinner time as he tells a Satanic version of the Nativity story. It becomes progressively more evident to our protagonists that the party is over, but leaving has become harder than they expected.

“Sheitan,” which is French for Satan, is a well-seasoned film released by Tartan Extreme, from first time French director Kim Chapiron. Co-written by his father Christian Chapiron, “Sheitan,” is admirably ambitious in its plotting. There is a lot going on here, and while it fails miserably at giving any straight answers, you'll still enjoy the jaunt through Chapiron's bizarre piece of French countryside. Mostly, this is due to Vincent Cassel's lead and stellar performance. From the minute he is on screen with his ridiculous prosthetic teeth and woolly mustache, he is impossible to ignore.

There are problems in particular however towards the end of the film because of a shift in tone, and things begin to become unclear. Joseph becomes less laughs and more intensity, and while Cassel pulls it off, it doesn't exactly feel earned in the context of the film, especially with all of the silliness that has played out beforehand.

Another problem with the film is that there is a lot of religious iconography throughout which is never truly cleared up. Neither is the intent of making two of the main characters Muslim, or the biblical names given to Joseph and Eve. It feels that Chapiron is trying something different, pushing the limits of the stereotypical backwoods family setting, and while it doesn't hit all it's marks, it hits enough targets to feel satisfying.

It is obvious that if Cassel were not in this film, it would be much less watchable. Cassel obviously owns his role and this movie and while he is not known as a comedic actor, this is a strength in his ability to pull off both sinister and hilarious simultaneously. The performances by the other actors are bland, and while Cassel is fun to watch, the film does have moments towards the end that are unsatisfying. Something gets lost in translation, making you feel uninvited to participate in the finale.

In and interview, Kim Chapiron unashamedly admits that he was inspired to make “Sheitan” by comic books and LSD; and knowing this makes the film easier to accept. There is a surrealistic dream sequence that comes out of nowhere and events seem to follow their own mad sense of logic. Chapiron is also showing us, like first time feature film directors tend to do, his range, to make sure that we know that he can do a little bit of everything: dream sequences, sex scenes, tension, comedy, creepiness, gore. It's all here in small doses and while it feels a bit like a scatterplot, there is still enough to create a solid horror film with a surrealistic rationale.

“Sheitan” isn't perfect, but it will definitely play well, drink in hand, with a group of friends, not all of them having to be fans of the genre. It's a great reminder of what can be done with creepy visuals and a great performance. While it does bite off more than it can deliver, it feels original in it's weirdness and Cassel can't be denied a horror Oscar equivalent. There is also a cameo by Cassel's wife, the stunning Monica Belluci, to look for.

It is certain that “Sheitan”, in the hands of a director with American sensibilities, would have blown its load on easy kills, loud noises, and gore. Chapiron instead gives us something different, something a bit more odd and unsettling, like bestiality for instance. “Sheitan” is fun for any horror-comedy fan, but it still delivers the uneasy feeling horror fans love to leave the couch with.