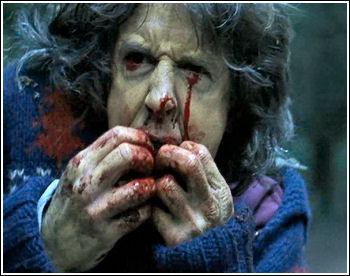 The most commonly used euphemistic definition of the word ‘crazy’ is doing the same thing over and over again and expecting a different result. This definition provides an easy way to illustrate a point to a friend who is stuck in a rut. It can also be therapeutically relevant as a way to talk to a borderline about the merits of Dialectical Behavior Therapy. Equally true is that with slight modification this definition is appropriate for the term ‘dumb ass’ as well.

So then, what term is defined by the following: when one does the same thing over and over until a crucial point in their lives and then chooses at that point to deviate from routine in favor of a course of action with little reward which endangers themselves and those they love? Of course we know the answer here is “calamitously stupid”. This term also happens to be the answer to another question I am asking today. Why didn’t the producers or director of “Severed: Forest of the Dead” demand a re-write when they read the film’s ending?

“Severed: Forest of the Dead” takes place in the forests of British Columbia where loggers and environmentalists have come to loggerheads (sorry) over a vast tract of old growth that is under the control of an unprincipled lumber company. Rita and her band of pine-nuts are blocking roads and spiking and chaining themselves to trees to stop the company from clear cutting the woods. Leathery, big-hearted Mac is the leader of the logging unit in the same forest. Mac drives his boys hard but loves ‘em like kinfolk. Unbeknownst to both Rita and Mac the lumber company has been boosting their trees with a super growth hormone that yields 2nd growth giants in record time. Of course, the super-juice has drawbacks. When one of the loggers is injured by cutting into a tree spike he quickly morphs into a savage green cannibal.

Back in the board room, John, the president of the company decides his son Tyler should go out and get some field experience. Tyler argues but eventually he is sent into the woods where, by the time he arrives, the tree virus has infected most of the loggers and protesters. He hooks up with a band of survivors comprised of both Mac and Rita’s people and together they battle through a forest lousy with Tree-N.A. mutated flesh-eaters. Along the way Rita and Tyler fall in love, a chemist reveals the secret in the wood and a rebel band of lumberjacks appear to both aid and threaten our heroes.

“Severed: Forest of the Dead” has a bevy of fatal flaws. The script itself is such a patchwork of “28 Days later” and older zombie film clichés that it will try the patience of even casual Z-film enthusiasts. What is worse is that the writing is lazy and poorly reasoned. Many of the story turns feel like they were added in hasty rewrites and therefore the characters actions and introductions are insufficiently motivated. Motivation may be the biggest of all the movie’s problems. There are points where the characters choices strike so far from reason that even the excuse of extraordinary circumstances seems like a cheap slap in the viewer’s face. Combine this with a surge of mushy “Oh the humanity” moments in the second half of the film and a tell-don’t-show style of character development and this thing goes south like it’s loaded with Sorbitol.

In many ways it is too bad that all of the elements did not come together. The first 10 minutes of the film are quite good and full of promise. A nice set-up, good locations and some capable on screen talent seem to be pointing to a favorable yield. The sinewy gut-munching and hand held combat-style shooting are impressively done and the editing and sound work are also noteworthy.

But actors, picture cutters, sound wizards and cameramen cannot put Humpty back together again when the writer keeps stepping on Mr. Dumpty's shell. Green zombies may be forgivable because they are after all, part flora, but why are they cannibals? How and why is there a rebel coterie of cast-off loggers living deep in the trees? When whole encampments of tree-cutters and tree-huggers have been chased down and eaten in 20 minutes how do two people chained to trees manage to last 35 minutes into the film? Do logging company work trucks not have 4WD? When do we reach the saturation point for scenes where someone’s friend or lover or child becomes a zombie and they can’t bring themselves to kill them?

None of these questions can prepare the viewer for the final 8 minutes of “Severed: Forest of the Dead”. Even if the rest of the film had been a '10' the short passage at the end would change the overall grade to a '6'. It is possibly the purest union of breakneck contrivance and injudicious, unjustifiable character behavior that I have ever laid eyes on. Stunning in its fatuity, hollow irony and miscalculation of depth the finale of ‘Severed’ is memorable for the ability to make the viewer crazy angry.