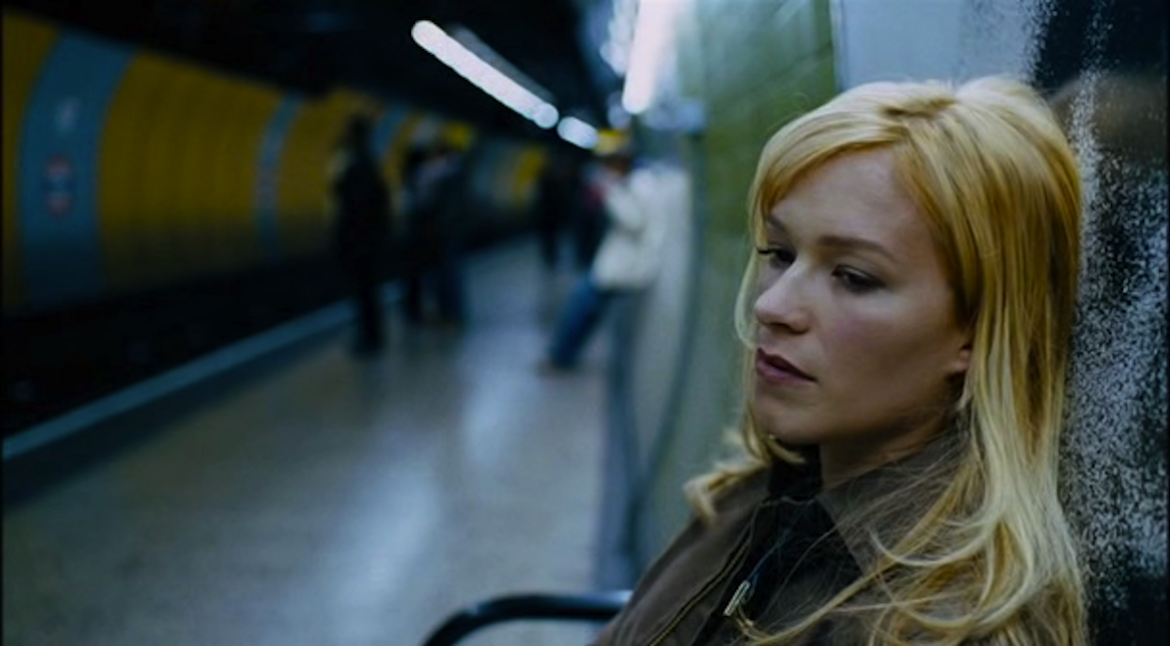 “Creep” is a frustrating horror film. I emphasize the horror here because it reminds you of both how uniquely enlightening and cathartic horror can be and also how quickly a horror plot can unravel, becoming adolescent in it’s thinking, driven to get to the bloodletting. At times the filmmakers seem to have a firm grasp on their narrative themes, utilizing some clever foreshadowing and poetic irony. The film’s writer and director, Christopher Smith, knows how to engineer the mechanics of getting certain characters to the emotional places they need to go. But after the initial recognition that certain events and shots are reflections of earlier moments there is little else to do with them. Indeed, the film appears both astutely aware of the material its drawing from but also unfocused.

The film’s central protagonist is Kate, a German transplant to London who works in an office seemingly full of fashionably dressed douchebaggery, cattiness and recreational drug use. During a company party we watch as Kate drinks heavily, smokes pot, insults a homeless man and then sets out on a quest to fuck George Clooney. (Yep, that’s an actual plot point). Eventually Kate is trapped inside the tube system where she encounters an attacker of unknown origin. She solicits the help of Jimmy, a resident heroin addict who lives in the station with his girlfriend, Mandy.

The remainder of the film follows some familiar beats of the stalk and slash variety. At times “Creep” has the trappings of a morality story concerned with the indifference of upper-class citizens to the plight of homeless. Early in the film, we are asked to see Kate as a “cheeky bitch” (as Jimmy puts it) whose actions are mostly self-serving. Even Jimmy’s assistance to Kate is at first only provided in exchange for cash. When he attempts to converse with Kate, she dismisses him with flippant annoyance. The sewer and tube line settings are also an interesting way of thinking about these themes. These are not primordial spaces untouched by humanity in which a certain spiritual type of evil lurks. Rather, it is from the waste, spillage, and hidden infrastructure of the world above that this place exists. The spaces are meant to function out of sight, invisible to the city. Much in the same way the homeless population is viewed by Kate, so the unchecked horror within the tubes and sewers is allowed to exist, hidden by the omission of the social world that does not question its own inner workings.

But while the first half of “Creep” goes to some interesting places, the remainder of the film is a patchwork of different set pieces cobbled together from genre elements dredged up in the last century (and much earlier) of horror fiction. The subterranean world full of abject grotesqueness. A young independent final girl figure pursued by an attacker/monster. The hive-mind like behavior of an animal collective. If that wasn’t enough for you how about a dash of mad scientist with a penchant for unclean, antique surgical equipment? It is in this hodge-podge of different horror elements that Smith looses his way a bit. In particular, it is when the filmmakers start providing answers for who/what is attacking the group that the depth of these themes shallows. Any allegorical intent we could find in the first half dissolves. *(Spoiler alert)* Indeed, it appears that the man attacking them is nothing more than a haphazard riff on Frankenstein’s Monster with an extremely misogynistic outlook. Even this information is only shown to us in a quick series of throwaway shots of old pictures and a secret hospital ward. It has the feeling that Smith needed to create some kind of back-story and ended up loosing a coin toss that made the decision. *(End spoilers)*

The film also has a slightly racists undercurrent running through it. The one black character in the film, George, is a former drug dealer unrepentant of his crime. In the same scene we learn this information, he is dosed with a mixture of what we are told to be “shit, tampons, condoms, whatever will fit down the toilet.” Later in the film, George seems to exist solely to either to slow the progression of Kate to safety and as an object of pity provoking Kate to exercise her violent, cathartic change…or at least that is what Smith seems to be going for. We are told George is doing this for his “little girl” but this information is trotted out flippantly as if to say, “Hey, look! Sentimentality will make you like me!” It’s a thankless, sloppy character.

It’s apparent that “Creep” is a film that tries to examine empathy. The problem with it is that the filmmakers do not seem to be invested in wondering what a lack of empathy may lead to. The final moments try to make a case that the experience has humbled Kate. That through the gauntlet of violence afflicted by and upon Kate she has become someone new. However, the fact that this change is signified through the transition of her outward appearance into one of the vagrants does not create empathy but merely asks us to see the homeless population as bodily shells that were once individuals. Rather than violence and the horrific interactions being something enlightening for Kate or us, we are left feeling unfulfilled by the experience and uncertain of what Smith is trying to accomplish.