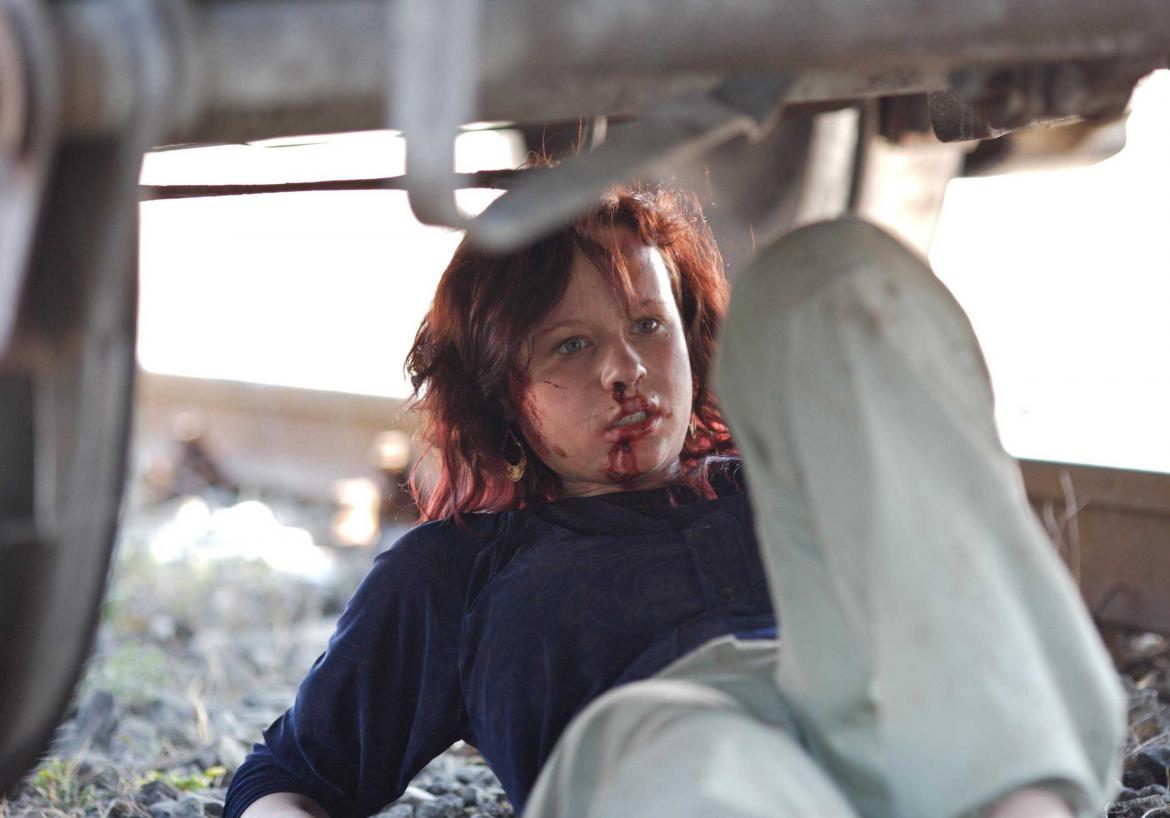 Would you board a train in an Eastern Block backwater and immediately surrender your passport to a scrubby pair of leering rail urchins? If you answered ‘no’ to this question this makes you a good deal smarter than Thora Birch’s character Alex in the film “Train”. This is bad news for audiences who like their horror victims to have the street smarts equivalent of a 6th grade education. Doubly bad news because Alex is easily the savviest and most pragmatic among the group of amateur wrestlers who board the unscheduled sleeper train bound for Odessa. Birch and her buddies are trying to make it to a tournament in the Black Sea port, but they've missed the regular team train after a night of cavorting at a sex club/disco filled with model caliber skin. You know the one where the leggy twins in lingerie will take you into the VIP lounge and tend to your manhood sans protection or payment, simply because you’re an American? No, not the one in Bratislava, the other one.

The train that Alex and her fellow grapplers choose is also harboring a bunch of sadists conducting a mobile tissue harvesting farm. Before long the group starts to thin out and the conductor seems none too helpful in tracking down the missing members. The band of 6 is quickly whittled to 2 and Alex and team chaperone Willy are forced to embark on a dangerous fact finding exercise. Along the way the nature of the train trip and the extent of the operation are unveiled. Alex watches the butchering of her friends and finds herself alone on a train full of killers and colluders. What to do? Perhaps disguise yourself as a peasant girl and make for the train’s secret laboratory?

If the producers of “Train” learned anything from “Hostel” it is that the economies of Eastern Europe benefit immensely from the disappearance of first world foreign nationals. Presumably because the syndicates in charge of the abductions pump all the money they receive for the sale of the disappeared back into the GDP at a rate that far exceeds the losses incurred by the tourist industry. Okay, that’s not fair, I have accepted much flimsier premises than the one at work in “Train”. In fact the premise is only one aspect that keeps the film from being worthy of a full-fledged recommendation. This film suffers from too much “Midnight Meat Train” and “Hostel”, a splash of “Turistas” and a parade of directorial missteps.

For two thirds of “Train” I had huge issues with most of the central elements. The biggest problems center on character. More precisely it is the fact that characters are more allusions to personality and depth than beings possessing actual emotions. That complaint alone isn’t enough to derail “Train”. But when combined with the lack of originality, mild xenophobia and consistent stupidity required from the players to keep the horror progressing (caudex ex macchina) it creates a sort of cinematic chamomile, which drains the tension out of a number of scenes. The blame for most of this is laid right at the feet of director Gideon Raff. He offers us a goofy initial set-up with thin, forgettable people and then expects those people to carry the viewer through a plot that is more than a simple stalk and slash. One could be inclined to cut him a break because the writing is so clearly subpar except that Raff also helped pen the script.

These issues were so prevalent that I felt like dozing off during much of the first act, were it not for some accomplished gore and well placed nudity I might have caught a catnap. Then a funny thing happened on the way to low-end mediocrity. The movie gets turned over to Thora Birch. Birch has really nice presence and her physical beauty isn’t used to make up ground ala Megan Fox in “Jennifer’s Body”. In the final act Birch and fellow standout performer Gideon Emery really deliver and the film finally attains the feeling of inexorable dread it has been going for. When this happens all the unsettling content starts to work and the movie speeds toward a mildly rewarding finale.

Train has some other things going for it. The cinematography is quite good and Director of Photography Martina Rawdan creates a mood that evokes the dark veil of crime and privation that replaced the iron curtain. It isn’t new ground but she skillfully follows the template that Milan Chadima established for horror amongst the ruins of empire in his shooting of the first “Hostel”. The brutality of the film is also well handled, with many scenes crossing over from gore set-pieces to disturbing depictions of rape and defilement.

You won’t forget that “Train” is a rip off of several films. You also won’t forgive the stupid final scene which seeks to complete an unbelievable character arc for Alex, or for that matter the stupidity of the characters overall. What you might get is a solid 35 minutes of entertainment out of the end of the film. It’s not enough for me to endorse “Train”, but it is a damn sight better than I had hoped for by the half way point.