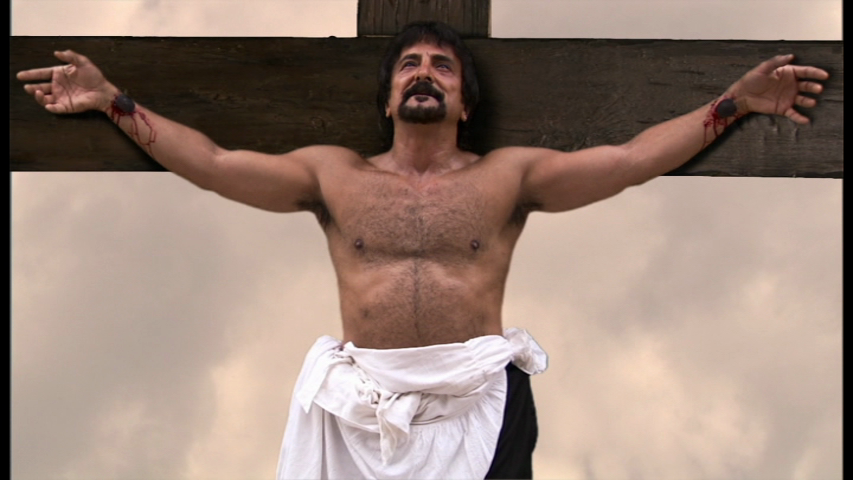 During the Dark Ages there was a popular bit of papal propaganda regarding the mythical king of a lost Christian kingdom somewhere between India and Here-There-Be-Dragons-istan. Prester John, as he was known, was said to rule over a land that shared a fence with the Garden of Eden and contained the Fountain of Youth and a vast menagerie of Heffalumps, Star-Bellied Sneetches and other implausible animals. After a few hundred years of European explorers and treasure hunters trying and failing to find the magic kingdom, the legend died out and today Prester John remains mostly forgotten, only occasionally popping up in Marvel comics to do battle with Thor in between long stretches of waiting for Dan Brown to write a novel about him.

Until he gets his moment with Tom Hanks, all you Prester John fanatics will have to make do with “Sea of Dust”, a low-budget period horror movie that tries to be a homage to both Hammer and David Lynch and doesn’t quite pull either off. Set in that vague 19th Century time period that all historical horror films are set in, the film follows a medical intern who finds an ailing girl on the side of the path as he travels through the Black Forest. He takes the woman to a local doctor and discovers that there has been a rash of unexplained illnesses in the area that begin with strange behavior and typically end with the victim’s head exploding.

It turns out that the strange occurrences are being caused by Prester John, an imaginary character who, much like Freddy Kruger in “New Nightmare”, has decided that he doesn’t want to be imaginary anymore and that he can harness the power of belief to cross over to our side. Or something like that. Prester John believes that the way to Christ is through suffering so he intends to bring about as much suffering as possible. The intern soon finds himself shuttled back and forth between the real world and the fantasy world Prester John rules over as he tries to subvert Prester John’s attempt at world domination.

The problem with low budget movies like this is often a lack of ambition. All too often, low budget horror movies trudge through clichés and try to cover up the lack of an original plot or interesting characters by piling on the gore and pretty girls. While this movie certainly has its share of gore and pretty girls, it could never be accused of being unambitious or unoriginal. The problem is, it’s all over the place. It starts out like a Hammer-throwback gothic horror (a point that is hammered home by the presence of Ingrid Pitt) then turns into a surreal fantasy picture, then veers off for a scene of slapstick humor and then, oh look, it’s Tom Savini discussing religion while wearing a Deluxe Dracula costume from the Halloween store.

Based on the cast, subject matter and ambitions at play I really wanted to like this movie, but in practice it was long stretches of boredom punctuated by WTF moments. At one point, the intern travels to the other side by literally fisting his way through a hollow woman’s womb. Later on a leather-clad harpy who looks like she escaped from the set of the video for Scandal’s “The Warrior” shows up to do some interpretive dance and urinate on some guy’s face. No matter how much I want to love a movie that ends with an ecstatic Tom Savini nailed to a cross, after 90 minutes of boredom and confusion I just wanted it to be over and done with. Не каждый посетитель массажного салона знает о том, что в комнате спрятана камера. В надежде на оргазм, клиент платит массажисту гораздо больше, чтобы получить секс-массаж. Скрытая камера https://erotic-massagenn.com/skrytaya-kamera по ссылке снимает самые непристойные сцены, которые могут стать шантажом для женатых. Если мужик потребует минета от массажистки, она выполнит его требования, а потом пригрозит показать все жене.

The fundamental problem with “Sea of Dust” is that it has no idea what kind of movie it wants to be. It’s too silly to be taken seriously as a heady horror movie that deals with the very real and relevant issue of religion being used as a tool to control people and fuel wars, but it’s too confusing and boring to be watched for the fun of exploding heads and Tom Savini dressed up like Coffin Joe. I hate to be down on this film and I salute the makers of “Sea of Dust” for being so dedicated to pushing boundaries and doing something different, but slamming your head in a door for an hour and a half is also different and I wouldn’t recommend that either.