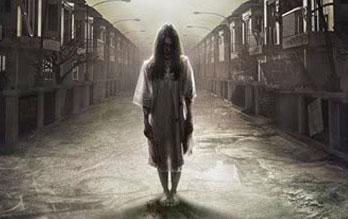 The cover of “Laddaland” has the cliched picture of a long dark-haired ghost-girl, and even though this is a trope that has worn pretty thin for most people, I’ll admit it’s something I still really enjoy. For instance, last year saw the release of the umpteenth sequel to the Japanese version of the Grudge, “Juon White Ghost/ Black Ghost” and as many of those films as I’ve seen, the movie was still creepy, and I still really enjoyed it.

“Laddaland” unfortunately didn’t even meet my meager expectations for a knock-off of something that has already been done to death. I likely should have lowered my expectations when the US distributor was too lazy to change the title, “Laddaland,” which might be among the worst titles for a horror movie I’ve ever seen. I didn’t expect this movie to set the world on fire, but I also certainly didn’t expect it to be the worst movie I’d seen in over a year -- at least since I thought it was a good idea to subject myself to the misery of “Wrong Turn 4".

“Laddaland” is the name of a housing community where a man named Thee has bought a new home to prove to his mother-in-law that he can take care of her daughter and his family. Soon afterward a woman is murdered in their community and her house is said to be haunted. The ghost then shows up in the protagonist’s house and Thee confronts what looks like a child with a cheap plastic Halloween mask. This mask looked so bad I couldn’t even tell if this was actually supposed to be the ghost or a neighbor kid pulling a prank. Either way, ghost-kid hits Thee on the head with a bottle and runs away.

Things soon start going south for Thee and his family as the company he works for goes out of business and he is forced to take a job at a gas station. Thee’s wife then may or may not have started cheating on him with her old boss. Thee has several arguments with his daughter about her staying out past her bed-time, and on one occasion she goes to the haunted house with her friends and sees the ghost. She tells her father this is the reason she was out late, and he is furious with her and eventually drags her to the haunted house where she slips and falls on some glass. After this she is out of the movie for the next twenty minutes for no real reason, as the mother tells Thee that the daughter is “staying with a friend during the week, but will be back on the weekends. We don’t have a choice, because if she doesn’t she’ll have to go back to Bangkok with her grandmother.”

Thee also has several arguments with his neighbor about their cat pooping in his yard, and the neighbor’s son, who’s name is “Golf.” At one point Golf locks Thee’s son in a closet and when Thee finds out he rushes out to tell his neighbor that Golf is being a little prick. The next day the family finds out that the neighbor had shot and killed his whole family including himself several days prior, and that Thee and his family had actually been talking to ghosts for the last three days. Most of the rest of the movie involves Thee’s two kids getting lost, and then people running around looking for them while ghosts pop in and out randomly.

There are a lot of things that really irritated me about this movie and it’s hard to know where to start. I guess my first complaint is that the director treats the audience as if they are complete idiots. When he wants to show the family being happy he shows them all laughing and smiling with the biggest goofy smiles while playing the most ridiculous “happy” music possible. When he want you to know things are going bad for Thee, he has someone smash a mug with the Thee’s picture on it. These are only a few examples, but the director pretty much just hits you over the head, as hard as he can, with something incredibly obvious every time he wants you to know anything.

Secondly, there are parts of the movie that are still confusing despite how incredibly obvious the director is with everything else. Is there a ghost in Thee’s house? Is Thee’s wife cheating on him? I don’t really know, and I refuse to chalk any purposeful ambiguity in this movie up to possibly the least subtle director in the history of mankind.

Also this movie spends so much time on family drama that the horror elements seem to be a complete afterthought. “Laddaland” plays out like some kind of shitty made-for-TV family drama with ghosts sandwiched in at random places.

I’m going to go ahead and spoil the ending of this movie, but it is so awful I’m certain spoilers won’t even matter. The movie goes to some pretty dark places as Thee wanders around in his neighbor's house with a gun and accidentally shoots his own son who was hiding in a closet. At this point, I think having Thee shoot his son is the cheapest thing that the writer/director could have done to shock the audience. After Thee shoots the son we find out he isn’t dead, but Thee doesn’t realize it and then shoots himself, which is actually an even cheaper attempt to manipulate the audience.

What follows after that is by far the worst yet. The wife, daughter, and son drive home and the family has a nice heart-warming conversation where the mother tells the daughter she wanted to abort her before she was born but Thee wouldn’t let her because he loved the daughter so much. They all have a great big cry and think about what a great guy Thee was.

But the agony doesn’t stop there... After that there is a several minute montage of them all being one big happy family while Thee was still alive.

I honestly can’t think of a worse ending. Over the course of this movie Thee has a downward spiral like Jack Nicholson’s character in “The Shining.” By the end of that film the audience hates Nicholson’s character, just like the audience is disgusted by Thee by the end of this movie. Imagine if Kubrick, instead of showing Nicholson frozen in the snow, had ended “The Shining” by having Danny’s mom tell him how she’d originally wanted to have him aborted, but his dad wouldn’t let her because he was such a swell guy, and then they all cry and hug everything out and then have a five minute montage of them all holding hands and laughing and petting kittens.

I absolutely hated this movie. I’ll admit it might be a pretty funny movie to watch with a group of friends and make fun of, but I suffered through it alone so I couldn’t really say. My best advice is to never watch "Laddaland" under any circumstances.