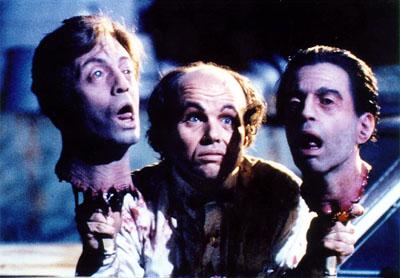 In case you haven't noticed, I tend to enjoy movies that violently skewer the so-called "sacred cows," the cultural taboos that most individuals hold dear to their deranged little hearts. For instance, watching a giggling lunatic dressed as Santa Claus fillet the entire staff of a locally-owned toy store is oodles of delicious fun, as is witnessing a convent of demonic nuns terrorize a befuddled group of braindead teenagers. I have, in a sense, embraced the tasteless, the graceless, and the tactless as a way to fulfill some sort of twisted cinematic compulsion. Thing is, I'm perfectly okay with that.

The reasons as to why, exactly, I've purposely drifted into the darker, more esoteric side of the Cineplex aren't clearly defined. I don't recall a 60-watt light bulb suddenly appearing over my head while watching a particular movie, nor do I remember a time when I experienced some sort of twisted enlightenment that arrived courtesy of my television screen. In fact, were you to carefully peel back the layers of my celluloid soul, you would discover a wide variety of obscure oddities floating blissfully in the nucleus. The influences on my current state of mind are numerous and varied, though some are more dominate than others.

One of the meatier chunks of discharge drifting in this filthy urinal is Paul Norman's deeply satisfying 1995 horror/comedy "Ice Cream Man," yet another attempt by a nominal director to transform a squeaky-clean American icon into something far more dangerous and foreboding. The entire production reeks of ineptitude, from the cornball theatrics of its second-rate cast to the seemingly endless supply of podunk special effects. When you can immediately tell that the token fat kid is wearing what looks to be a pillow strapped to his skinny frame, you know you've picked a winner. Good for you.

Professional weirdo Clint Howard shines bright as the picture's titular maniac, a former mental patient who spends his days quietly roaming quaint suburban streets in his ice cream truck of terror. And while the adults are too wrapped up in their sordid affairs and their narcissistic ways to notice the large number of missing people in the neighborhood, their children are certainly aware of the problem. What’s more, they know precisely who’s behind these grisly murders, and foolishly believe they’re the only ones brave enough to stop him. Of course, by brave I mean stupid. Unimaginably stupid. Short bus stupid.

Prior to “Ice Cream Man,” Paul Norman (aka Norman Apstein) cut his directorial teeth in the porn industry. This comes as no surprise; his abilities behind the camera are fairly fundamental, a fact which actually gives the entire film a surreal, dreamlike atmosphere. Norman’s depiction of the ideal American neighborhood, this “Leave it to Beaver” way of life, is very Lynchian in its design and execution. Everyone in the movie has a skeleton lurking somewhere in their respective closet, even if it’s just a femur and some cartilage. Were “Blue Velvet” directed by Jeff Franklin and distributed by Lorimar Television, this is probably what it would resemble. Shudder the thought? Never.

The industrial strength glue holding this slipshod slasher together is cult icon Clint Howard, one of the hardest working guys in B-grade cinema. Out of all the kooky actors who signed on to co-star in this truly miserable endeavor, he's the only one who seems to take the project seriously. There are several moments throughout the movie where Mr. Howard's nuanced performance elevates the material to a plane it never would have reached otherwise. Even when he's decapitating cops and using their severed heads as puppets, you can't help but feel sorry for the guy. That takes talent.

If it were possible, I would write my dissertation on Paul Norman’s “Ice Cream Man.” I would methodically remove all the hair on my body, discard all of my worldly possessions, and live inside “Ice Cream Man.” In a perfect world, every room in my spacious abode would have a television, and every television would play “Ice Cream Man” for infinite. Absurdist rambling aside, the movie definitely ranks as one of the best B-movies I’ve seen in my entire life, which is saying a lot. Clint Howard has never been better, breathing a surprising amount of humanity and humor into a character that is, for the most part, hopelessly mad. “Ice Cream Man” is a blinding stroke of genius perpetrated by gross incompetence, dumb luck, and a Converse sponsorship. Thank God for athletic footwear.