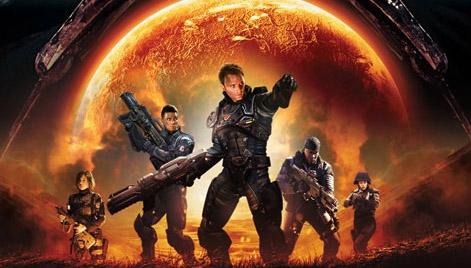 In 1995 some of us watched along as Peter Weller flew off into the deep reaches of space to the planet Sirius B in the film adaptation of Philip K Dick's short story "Second Variety". "Screamers" came and went with little fanfare, though for the few who actually saw it, many became fans. In the original film Sirus B, a distant mining planet, fell prey to sentient security bots known as "Screamers". The bots are called that due to the sound that emitted when attacking.

Cut to 2009 and I find myself surprised to see the release of a sequel to this 1995 SciFi flick called "Screamers: The Hunting". While I was a fan of the original film, I felt there was little need for a sequel and was quite happy that they hadn't turned the film into a franchise. However, part of me wanted to believe that this direct to video sequel could bear some merit, even though P.K. Dick never intended such a feat in the original writings.

13 years have passed since the events of "Screamers"; after which the planet Sirius B was thought to be abandoned and empty due to the slaughter that occurred. A mysterious distress call from the planet is met with much bewilderment back on earth, so much so that they feel the need to throw together an emergency mission to investigate. On the ship is a new crew of ragtag soldiers, most of which who are simply following orders. A few of the crew begin to show that they have their own agendas as the mission unfolds. Before long they meet up with the refugees stuck on the planet and soon learn the next logical step in the evolution of the Screamer Bots.

While I can appreciate the continuation of the story told in the first film, I still fail to see the reason for making a sequel. The story was tied up nicely and most were happy with it being a one shot deal. As the movie unfolds, it quickly becomes apparent that even the filmmakers failed to see a specific need to return to Sirius B, as the movie doesn't bring new detail to the compact world. Sure there are new strains of robots and a band of refugees that somehow survived on the empty planet for thirteen years, but in essence it is nothing but the same story over again.

It's essentially this: outsiders and natives fight against killer robots. Wash, rinse, repeat. While they do work in some details to tie the sequel to the original, they fail to do much to expand on the story. We soon find out that that Joe Hendrickson's (Weller) daughter is a member of the crew (other than a brief explanation of what happened to the character after the first movie, they do little but mention his name). They also manage to add some depth to the bots by adding genre stalwart Lance Henriksen to the cast as the bots' original designer, however once again they fail to flesh the angle out to any lasting degree.

The other problem facing "Screamers: The Hunting" is pacing. While the original movie was slow for a science fiction action film, there were heavy story elements at play that made the film more atmospheric and engrossing. In "The Hunting", the story elements fall short and the film devolves into pointless scene after pointless scene. We watch many extended shots of the crew marching across the desert sands over and over, reaching a destination, turning around and repeating the trek in full detail back to their ship. The next day, they feel the need to return to that original destination, so they turn around and show the trek once again. Scenes such as this that were in sore need of editing managed to bog down the movie and move it from entertaining to being a chore to sit through.

What little they did expand on the existing universe of "Screamers" was well received. While minor, there are glimpses at the evolution of the bots (which is the entire point of the franchise), corporate espionage at play, and some wistful emotions coming from Lt. Bronte as she learns the details of her father's time on Sirius B. Henriksen brings the crusty old hermit to the screen like only he can, and in the process delivers some fun one liners and adds a touch of credibility to the film. Gina Holden, playing the lead of Lt. Bronte, does a decent job of conveying her character to film, although unfortunately there is little for her to work with. The remainder of the cast seems nothing more that set dressing, always in the background and seldom stepping to the forefront.

Despite being unwanted, I had high hopes for this sequel. In the end they fell short due to poor editing, slow pacing and a failure to make the the film interesting. There was no real need to continue on the story of the sentient robots of Sirius B, and this film won't convince you otherwise.