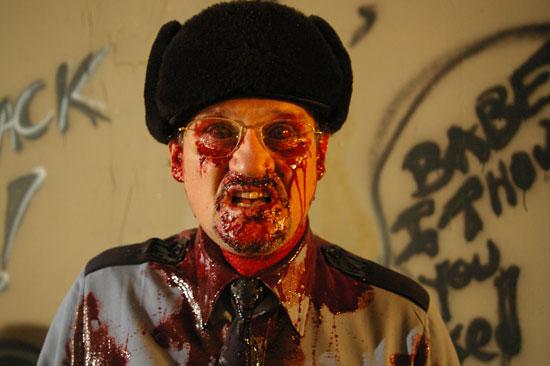 I have a soft spot for the 1998 killer teen automaton thriller “Disturbing Behavior”. It’s not an original story nor does it feature any bravura direction, but it does enough to set a good mood and carry it through. Perhaps it’s because of the outstanding cast, the underrated soundtrack or the choice to set the story in an isolated Pacific Northwest community. Whatever the reason I can escape into the movie without getting caught on its deficiencies. I have an even greater fondness for the 80’s body snatcher reworking “The Hidden”. The film is quirky, fun and inventive; again it features a great cast and a fantastic soundtrack. So, when I read the synopsis for “Scourge” and it sounded like a combo of elements from both I was cautiously excited.

“Scourge” takes place in rural Washington State and opens with a scene from the late 1800’s involving lightning, hooded crusaders and some strange creature being extracted from a chained man and placed in a sealed container within the belly of an old church. Forward to present day, the church has been burnt down and firefighters are combing the cinders. One of them unearths the vessel that contains the wicked little parasitic beast from the opening sequence. He is quickly infected or impregnated or inhabited by the beast and returns to town where his primal impulses for food and sex go into overdrive.

While this is happening Scott Miller a member of the local miscreant family comes back into town. He seeks out his old flame Jesse and attempts to reconnect. Scott is quickly warned off by the local sheriff who is also Jesse’s uncle. Jesse and Scott will ultimately be swept into the center of the town’s monster madness as the police search for answers to a growing number of parasite victims.

The biggest scourge in “Scourge” is stilted dialog delivered with indicative dispassion by unremarkable actors. Or perhaps it’s the lack of direction given to the actors that make them unremarkable. Unfortunately the film’s problems do not end there. The forward momentum of the "Scourge” plot is dependent upon the characters operating at the intellectual level of farm turkeys. What is worse is that the filmmakers assume the average viewer is at the same level and therefore unable to keep up with the film’s very basic story structure. This assumption provides us with a good number of superfluous cut-aways and a series of flashbacks that make it seem as if the anticipated audience would have difficulty understanding a game of cowshit bingo.

To try and be fair to this film I am going to give it a conditional comparison review based on budget. At a budget of 1.5 million this is 3 times better than “My Bloody Valentine 3-D” (which had 10 times the budget). Unfortunately it is not even a quarter as good as “The Signal” which was made for roughly 3% of the budget that “Scourge” enjoyed. On the other hand if “Scourge” had featured Betsy Rue buck naked, instead of the ridiculously pantomimic guy playing the infected firefighter it would have been nearly one third the movie that “The Signal” was and 3.8 times better than “My Bloody Valentine 3-D”. Hope that clears things up a little bit.

In all seriousness, the film is not without bright spots. The climactic scene in the hotel room is reasonably tense, well structured and entertaining. The creature CG is not going to elicit any gasps but it is better than some of the work I have seen done at higher budgets. But chief amongst its attributes is that the film features one of the great right crosses ever thrown. In fact, it’s so good that I can almost recommend watching just to get to that point. If the movie could be viewed in reverse scene order I would give it conditional thumbs up. Alas no such option is available.

I think we have all had occasion during this, the aluminum age of horror film remakes, to ask ourselves “Why would I watch a remake, re-imagining or restart when the original is fine the way it is?” “Scourge” though technically not a remake is still close enough to “The Hidden” to make this a fair question. Unfortunately, for all involved the conclusion to be reached is that you should just watch the original. And if you want to approximate what this movie could have been should all of its elements coalesced perfectly follow “The Hidden" up with a viewing of “Disturbing Behavior”.

Island of the Fishmen