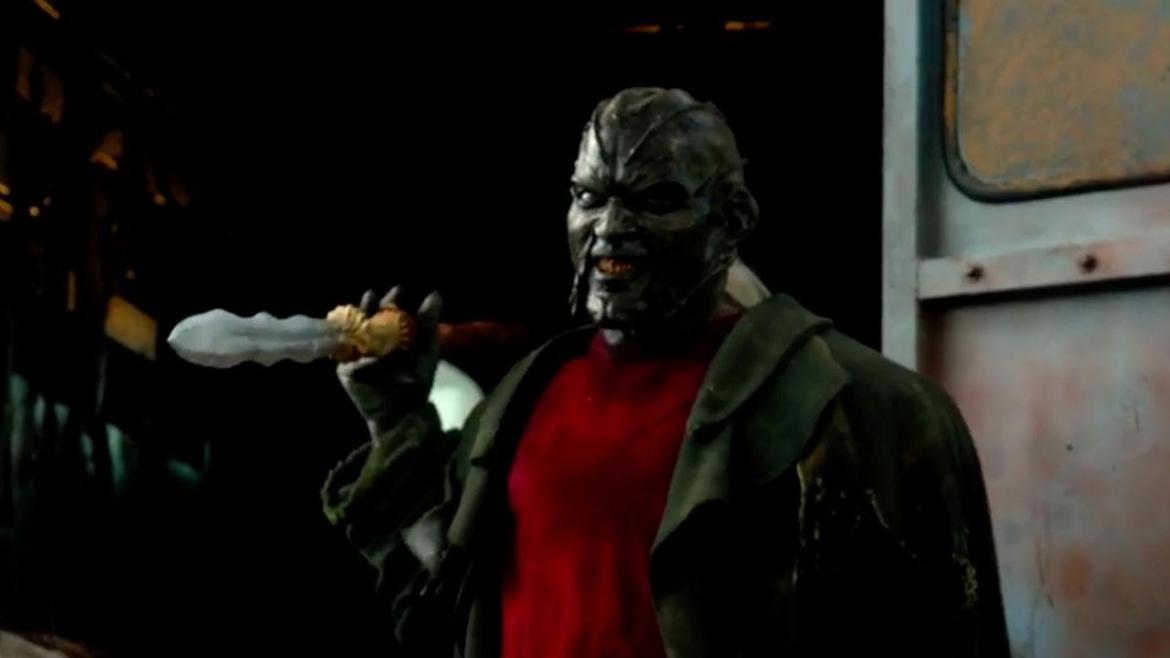 Before its official release, Jeepers Creepers 3 had a great deal of controversy surrounding it. With its director being monitored for child abuse allegations, it appeared the third entry in the series was not going to make waves, even if it ended up being a masterpiece. Looking at the film objectively and without the lingering moral issues of its creator on my mind, I can attest that Jeepers Creepers 3 is not only a terrible film, but it is a lesson in how to make something far, far below mediocrity.

In this third entry in the slasher monster series, a small town's police force has decided to take back their peace of mind from a powerful and ancient monster known as the Creeper. On the final day of its twenty-three days of feasting on humans every twenty-three years, Sheriff Tashtego (Stan Shaw) and Sergeant Tubbs (Brandon Smith) team up to bring an end to the Creeper, but they don't know how to stop it. After several failed attempts at harming the monster, a lonely farm owner named Gaylen (Meg Foster) informs the men that the Creeper's origins are tied to a possessed old hand that once belonged to the Creeper. However, after being warned by the ghost of her dead son, Gaylen must flee her farm with her granddaughter before the Creeper returns to take back its lost appendage and kill anyone in its way.

Salva's third approach to the Creeper mythos announces its lack of quality from go. In the opening scene, a police squad investigates the Creeper's truck, and instead of a slow or tense build up, people just start getting hacked to bits by a truck fitted with booby-traps. While the first two films in the franchise haven't shied away from campy tropes, there was a consistent use of growing tension that exploded into a fun slasher show by the third act. From the acting to the visual effects, everything here feels phoned in. Of the many characters Salva throws at us, only a few stand out as memorable, and even then, they're performed as either over the top or without any sense of immediacy. Even the film's biggest star, Foster, seems to only be involved for the sake of clout, as her character's B plot ultimately leads nowhere satisfying or necessary. As for the effects, well, the Creeper's wings have never looked worse, with them often having the same quality as clip art.

Perhaps the greatest sin of Jeepers Creepers 3, though, is why it exists. From the beginning, it's not entirely clear when the events of the film are taking place or where it fits into the timeline. Most viewers, including myself, will believe it's simply a continuation of part two, but it's revealed late into the movie that it actually takes place between the events of the first and second films. Of course, having horror franchises with convoluted timelines is nothing new, but they are typically designed that way for a purpose, whether it be to reboot a series or fill in holes for characters. In the case of Jeepers Creepers 3, though, it seems to have nothing to add to the series. In fact, everything we knew about the Creeper and his 23 days of feasting a year, is retold, as if the viewer had never seen any other film in the series. Once the reveal is made, it feels like nothing more than a hollow attempt at a twist. As previously mentioned, there is a side plot with Foster's character that tries to expand the entire franchise's lore, but it's unclear what it all was supposed to mean or why it was even inserted.

For those that had any shred of curiosity about Jeepers Creepers 3 but didn't want to support its filmmaker, like me, you can rest assured knowing you made the right choice to avoid this film for several reasons. For one, the extreme drop in quality compared the first two entries is shocking, from the visual effects to the simple slasher beats. In addition, the Creeper has never been less terrifying, and quite frankly, the only way to bring him back into the horror fold is to drop Salva.

My Soul to Take